The polls showing Premier Campbell in deep doo-doo came out before the Site "C" decision. God only knows what the results would have been if they had been taken afterwards. 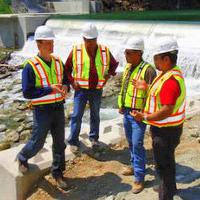 Site "C" demonstrates beyond doubt that Campbell hasn't been telling the truth in two critical areas of his energy policy. B.C. is NOT a net importer of power which is the fundament of that policy. BC Hydro is sometimes, though not always. Moreover, counted as imports is the energy it buys abroad at low use times and re-sells in peak periods. It can do this because it can "store" energy as water in a reservoir. This isn't importing -- it's flipping, and at a nice profit too. You would think that Campbell and his crowd would know something about flipping.

The fact is that BC Hydro is not the only provider of energy in B.C., and when you include -- as you must -- energy produced by Alcan, Teck Cominco and Fortis, British Columbia is a net exporter of power.

Of more concern ought to be the Campbell government's mantra that private power will be used by British Columbia to make it energy "secure." This is plain and simply a falsehood, a falsehood the mainstream media simply can't grasp.

This is key, for if private power was needed for our own vital needs that would be a very serious matter, and the debate about damming our rivers would be different. The egregious nature of this falsehood can easily be seen thusly: the power to be produced by two large private "run of river" projects, the Bute Inlet and KlinaKilni projects, is considerably more than can be produced by Site "C." So why isn't Campbell fast tracking these undertakings, thus avoiding the need to do Site "C"?

Because they can only produce their power during the run-off when BC Hydro doesn't need it.

In short, when Gordon Campbell told us that the decision to give our rivers away was so that private power could help us be energy sufficient in 2016, the truth was otherwise.

If you needed more proof of this, Site "C" provides it once and for all.

Now to the polls.

At first blush they look terrible for the Liberals, but in fact, while they're terrible for Gordon Campbell, they are a blessing in disguise for the party. Campbell doesn't give a damn because he'll quit next year or maybe the next at the latest and no doubt be offered a lot of money on boards of directors of energy companies -- he's earned it. For the party, however, the numbers bode well, if in a back-handed sort of way.

Carole James, despite the brave assertions of Moe Sihota, the NDP president, can't win the next election unless the Greens and/or a new party split the vote. Given a couple of years before the May 2013 election, under a new leader the Liberals, while they won't be rid of Campbell's corrosive stain could, given the right leader, win again.

James's problem is that she's too nice and too decent for politics which, especially in British Columbia, is a blood sport. When she took her seat in the House as leader of the opposition, she wanted to improve the atmosphere -- make things more grown-up and polite, you might say. However noble and admirable that was, it betrayed her ignorance of how the system works.

It's really simple. Under our system, backbench MLAs on both sides are political eunuchs. Former U.S. speaker of the house Sam Rayburn said, "To get along, you must go along," and sadly that's the truth of the matter. I'm not saying that backbenchers don't ask tough questions at caucus meetings -- I'm sure they still do as they did eons ago when I was there. In the end, however, they do precisely what they're told.

How the blood sport is played

Why do you think that government MLAs always vote for their government's bills?

If they don't, not only will they never make cabinet, or parliamentary secretary or even the sinecure known as the "Whip," they risk being thrown out of the caucus and even the party.

The importance of what I've just said is this -- the only purpose of the legislative chamber is for the opposition to spill blood figuratively instead of actually.

Good oppositions hold the government's feet to the fire. They try to divide the government; they try to embarrass them. They want the media to show the public what idiots the government and especially the cabinet are. (You would think that would be easy with this lot in power.)

In that sense they have more freedom to make their mark with these two provisos -- if they do so other than what the leader wants, they're writing themselves out of a future cabinet, and while it may be fun to bray at the government, it's not much food for the soul.

The object of the leader of the opposition is not to make the House a safe place for little school children to be, but to make the government sweat.

It's to her great credit as a person that Carole James can't do this, but it's the death knell for her as a leader.

The Liberals will have a leadership contest in May of 2011 and they will elect Diane Watts, mayor of Surrey, as leader, and failing that, Mike DeJong the attorney-general.

Diane Watts will be preferred in a woman-to-woman fight, plus she'll be able to say, "I'm not responsible for that horror story called the Campbell government and just look at what a wonderful mayor I've been."

I hope I'm wrong. Carole James as premier would probably do a decent job -- it's not as if she has a tough act to follow.

The problem is she has to get there first and I don't think she can do it.