It was an unexpected surprise. A gift, really. 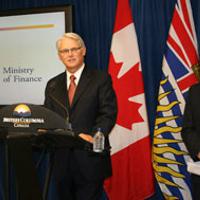 Eighteen months ago, on February 19, 2008, then-BC Liberal finance minister Carole Taylor tabled the province's 2008-09 budget -- her last before quitting politics -- and said she was wiping out B.C.'s corporation capital tax.

For years the big banks had lobbied to have the hated tax abolished, but to no avail. Indeed, over the past three-and-a-half decades, governments of every political stripe -- NDP, Social Credit and BC Liberal -- have seen the corporation capital tax as a way for British Columbians to share in the enormous profits earned in this province by Canada's largest banks.

(Canada's 'Big Five' banks are headquartered in Toronto. As a consequence, they're largely exempt from paying provincial income taxes.)

Fast forward to August 27, 2009 -- just two weeks ago -- with a news release from Canada's second-largest financial institution, the Toronto-Dominion (TD) Bank. (In terms of market capitalization, the Royal Bank is the country's biggest, followed by the TD, then the Bank of Nova Scotia, the Bank of Montreal and the CIBC.)

The TD was adding another member to its board of directors. Who might it be?

Why, it's none other than Carole Taylor, B.C.'s former finance minister, who last year killed the province's corporation capital tax!

B.C.'s corporation capital tax was introduced in 1973 by the province's first New Democratic Party government. The intent, said then-Premier and Finance Minister Dave Barrett, was "to raise the contribution of companies to the costs of providing government services to the people of British Columbia."

According to Barrett, the corporation capital tax would generate $7 million annually for the provincial treasury. But in its first full year of operation (1974-75), revenues came in at more than double that figure -- $16.7 million.

The new Social Credit government led by Bill Bennett, which was elected in December 1975 with a promise to kill the corporation capital tax, merely tinkered with it and revenues continued to soar. In 1979-80 the levy generated $47.3 million, and in 1985-86 it hit $94.3 million.

(All figures relating to the corporation capital tax were obtained from B.C. budgets, B.C. Public Accounts or the province's Financial and Economic Review, from various years.)

Some changes were in order, and in 1985 then-Social Credit finance minister Hugh Curtis introduced an amendment that would gradually eliminate the tax over a three-year period. As one Socred acknowledged in the House, it was time to fulfill a promise made in three different elections.

There was one major exception to Curtis' amendment, however. According to the Socred finance minister, the phase-out applied to all companies operating in B.C. "except major banks which have their headquarters outside the province". In part, the measure was intended to induce one or more of the country's large banks to re-locate to British Columbia.

He wryly added: "This change will not have any effect on taxpayers, since there are no banks with head offices in British Columbia which are large enough to pay the tax."

Indeed, the major banks continued to pay B.C.'s corporation capital tax -- and additionally, thanks to another Couvelier amendment -- so would large trust companies.

How New Dems pumped up the tax

The election in 1991 of B.C.'s second New Democratic Party government saw a renewed focus on the corporation capital tax. In his first budget speech on April 1992, NDP Finance Minister Glen Clark said he was expanding the levy so that it would apply to all corporations -- not just financial institutions -- with paid-up capital in excess of $1 billion.

As was intended, corporation capital tax receipts soared under the New Democrats, leaping to between $350 million and $400 million annually for most of the 1990s. By the NDP's last three years in power, the yearly revenues had skyrocketed to about $460 million.

B.C.'s business community seethed at paying a tax that was based not on profits, but on capital, and the Fraser Institute described it as 'Canada's Most Damaging Tax'.

Not surprisingly, the 2001 election to government of Gordon Campbell's BC Liberals saw a renewed effort to whack the capital levy. But as the Socreds before them had retained the tax on financial institutions, so too did the Campbell Liberals.

Just three months after winning a lop-sided, legislative-assembly majority of 77-2, new Finance Minister Gary Collins said he was phasing out the tax on corporations "that are not banks, trust companies or credit unions".

As they were under the NDP and Socreds, the country's biggest banks were unhappy about being singled-out for the capital levy, and continued to lobby the BC Liberals throughout their first two terms in government.

Frequent presentations were made by Paul Griffin, B.C. representative of the Canadian Bankers' Association, at annual pre-budget hearings held by the legislature's Select Standing Committee on Finance as it travelled through the province.

In October 2001, at the Hotel Vancouver, Griffin complained to MLAs that "Canfor ... like all general corporations in B.C., will be completely exempt from paying capital tax in 2002. We don't think that's fair."

Six years later, in October 2007, at the Holiday Inn in Surrey (see link), he argued that "the time is right to take the next step: remove the capital tax on financial institutions".

But those appeals and others seemed to fall on deaf ears. Or so it seemed.

"Some obstacles are holding us back from becoming a more important centre for international finance," Carole Taylor said when she unveiled her 2008-09 budget. "The first indisputable issue is the tax we levy on the capital assets of financial institutions operating in B.C."

To that end, Taylor said the government intended "to phase out the capital tax on financial institutions by 2010."

Yet, despite abolishing the long-standing capital tax, Taylor nonetheless vowed to replace it with "a new minimum tax on financial institutions with capital over $1 billion," and introduced legislation to change the Corporation Capital Tax Act to the Financial Institutions Minimum Tax Act.

How much will the B.C. government receive from the new tax? As stated earlier, budget documents show that no revenue is expected from the corporation capital tax after 2010, but they also show no receipts from its replacement.

According to Griffin, the CBA's B.C. lobbyist, banks paid $57 million in capital tax in 2000-01, and $75 million in 2006-07. Since the new minimum tax applies only to the biggest banks, slashes the rate on B.C. paid-up capital from three percent to one and provides a number of exemptions and deductions, it's hard to see Canada's largest financial institutions -- all together -- paying more than $10-20 million per year, if that.

Why did Taylor do it?

The question remains: why did Taylor repeal a tax that had been in existence since 1973?

Under questioning by NDP Finance Critic Bruce Ralston -- who said he had checked the lobbyists' registry and found no record of Asian or banking representatives visiting Taylor to ask for abolition -- the ex-finance minister tabbed Paul Fairweather, former head of Vancouver's International Financial Centre, as her source of inspiration.

Yet this past spring -- two days after the May 12 provincial election -- the Globe and Mail's 'Report on Business' section ran a front-page feature-article on the growing political clout of the Toronto-Dominion Bank. (The article may be purchased from the Globe here, or read for free on this blog.)

According to the Globe's account, "From taxation rules in British Columbia to sales tax harmonization in Ontario to monetary policy in Ottawa, TD has become what many see as Corporate Canada's most influential player on public policy..."

Moreover, the newspaper reported, it was Frank McKenna -- a former Liberal premier of New Brunswick (from 1987-97) and ex-chair of CanWest Global Communications, which owns the Vancouver Sun newspaper and the Global Television network (from 2003-05), now deputy-chairman of the Toronto-Dominion Bank Financial Group (since 2006) -- who had convinced Taylor to kill B.C.'s tax on banks.

"In particular," stated the Globe, McKenna "was instrumental in helping persuade British Columbia" to repeal the corporation capital tax.

And now -- in a remarkable coincidence -- Taylor has been named to the board of directors of the bank that played a key role in convincing her to repeal B.C.'s corporation capital tax.

Huge bank profits in a downturn

On August 27, the same day Taylor's TD appointment was announced, the bank also disclosed its financial results for the third quarter of 2008-09. And, boy, were they good!

Adjusted net income for the quarter was $1.3 billion -- yes, billion with a "B" -- which was up from $1.1 billion in the same period one year earlier. And on a year-to-date basis, the bank's adjusted profit was a whopping $3.5 billion, compared to $3.1 billion in the preceding year.

The Toronto Dominion wasn't alone in recording stellar results. Also on August 27, the Royal Bank announced it had racked up a record third-quarter profit of $1.56 billion.

So, while Canada's federal and provincial governments are recording massive deficits, with revenues seeming to have fallen off a cliff, our nation's largest financial institutions are doing very well, thank you.

And in British Columbia, thanks to Carole Taylor's 2008 budget, the big banks will be paying a decreasing amount of capital tax to the provincial treasury -- which this year is expected to show a $2.8 billion shortfall.

But what about Carole Taylor? Will she be doing okay?

Plus, Taylor will get an extra $20,000 yearly because she lives in western Canada.

Then there are the "share-based awards" given to the directors because of the bank's laudable financial performance. Last year, most directors received a minimum of $70,000 in TD stock, with the chairman getting $150,000.

Yup. She'll be doing okay. It's a gift, really.