There were minivans spray painted with the message “Trudeau must go,” Canadian flags flying from hockey sticks and shovels and young men proudly displaying Canada’s old flag — the Red Ensign — which has come to be associated with anti-immigration views and white supremacy.

On Saturday, the convoy protest came to downtown Vancouver — and Toronto, Edmonton, Victoria, Kelowna and many other cities in Canada. In Ottawa, a truck convoy protest and occupation that’s been running for a week has intensified, with the chair of the city’s police board calling it a “siege” that is part of a “nationwide insurrection.”

The movement supposedly started as a protest against vaccine mandates for commercial truckers, but participants’ messages range from opposition to vaccines, vaccine mandates, all pandemic restrictions, the news media and condemnation of Prime Minister Justin Trudeau.

Meanwhile, the COVID-19 pandemic continued to strain hospitals and health-care staff, with hospitalizations of patients with the illness at their highest level ever in B.C. On Feb. 4, the province recorded that 19 people had died of COVID-19 in a 24-hour period.

In Vancouver, protesters were headed to a downtown intersection, at Burrard and Robson — because, organizers said, that’s where a local news broadcaster, CTV, is located. On Facebook, the event was billed as “The Media is the Virus Convoy.”

As I was taking photos and video, I noticed a camera operator with his back against a store wall and his video camera on the ground. Protesters were rushing at him, bellowing “Liar! Liar!” A police officer quickly stepped between the camera operator and the protesters and the journalist was able to make his escape.

Counter-protesters had been organizing in other parts of the city. On Saturday morning, they’d blocked three intersections with their bodies and bicycles, trying to prevent the convoy from proceeding past three hospitals that were on the protesters’ route.

After joining a blockade at Main and Broadway, Steve Stewart headed to Burrard Street and spent hours pushing his bike back and forth on crosswalks near St. Paul’s Hospital, holding a sign hastily made from a manila folder that read “Thank you health workers.”

Stewart had surgery at the hospital a few months ago and wanted to find a way to support health-care workers and the patients at the hospital who had to endure the loud protest for hours. Health-care workers have been harassed during previous protests across the country, and workers at the three Vancouver hospitals on the convoy’s route had been warned to not wear their scrubs outside or have their ID passes showing during the protest.

“I was so impressed by how our health-care workers held up and cared for us despite the pandemic and all the people they’re looking after with COVID,” Stewart said. “They don't need more stress.”

Elyse had also been a patient at St. Paul’s years ago. The North Vancouver resident showed up with a sign that read “leave hospitals alone.”

“I’m here to hopefully, respectfully ask the protesters to not honk when they’re in front of hospitals,” she said, adding that while some people reacted rudely to her sign, others signed to her that they would be quiet as they drove by.

As I spoke with Elyse, holding my phone up to record the interview, the driver of a white van creeping slowly by next to us in the stalled traffic on Burrard Street started blasting his horn continuously. When we were able to continue the interview, Elyse said that while she doesn’t agree with the protesters’ message, they have the right to protest. She just didn’t think they should be disturbing sick patients and health-care workers with loud honking.

Other counter-protesters were a little more aggressive than Elyse. A group at Burrard and Helmcken were quick to engage with convoy drivers who were annoyed by their signs, which included “honk if you have a small dick” and “honk if you love vaccines.”

“I’m vaccinated!” one convoy member wanted them to know.

Another woman driving among the convoy yanked at her seatbelt. “This is tested, so I wear it!” she said, going on to say that she doesn’t trust that COVID-19 vaccines are safe.

“This whole convoy thing is ridiculous,” said Bill, a West End resident who was holding a sign that said “honk if you love vaccines.”

“People are being used as pawns by right-wing extremists. This is another example of white privilege. They’re breaking laws left, right and centre and nothing’s happening.”

On Friday, Vancouver Mayor Kennedy Stewart issued a statement saying, "While every Canadian has a right to peaceful and respectful protest, nobody has the right to promote hate, jeopardize the safety of our communities, or interfere with access for patients, staff or first responders. 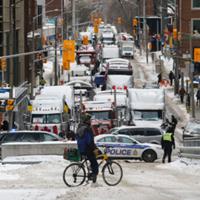 Most Disagree with Convoy Truckers on Vaccine Mandates and Lockdowns

"Hate has no place in our city. We all have to stand together against hate in all its forms, including when it targets frontline and health-care workers,” he said.

Police reportedly made five arrests related to the convoy protesters and counter-protesters in Vancouver.

Many Ottawa residents have been outraged that convoy protesters have been allowed to disrupt their city for so long, with the police unwilling or unable to enforce basic rules like traffic infractions.

Penny, a counter-protester standing with the small group at Burrard and Helmcken, said she’s also been struck by the contrast between the police response to the protesters in Ottawa and the response when Indigenous people hold similar protest actions.

“I’m frustrated. As an Indigenous woman who goes to protests for things that we actually need in Canada, it’s a slap in the face,” she said, “not just to the health-care workers but kind of to everyone.”