An initial analysis of deaths during British Columbia’s unprecedented heat dome event in late June shows that people with mental illness and substance use issues may have been particularly at risk.

Other factors that put people at an increased risk of dying included being older than 50, socially isolated and living in poorer neighbourhoods with less green space and tree cover, according to a presentation by Sarah Henderson, the scientific director of environmental health services at the BC Centre for Disease Control.

During the week-long "heat dome," temperatures rose as much as 12 C higher than normal in Vancouver and temperatures did not cool off much at night, meaning there was little respite from the heat.

It was the deadliest weather event in Canadian history: 526 British Columbians died of heat-related causes during the heat dome that lasted from June 25 to July 1.*

She found that local health areas that had the most abnormally high number of deaths during the heat dome were New Westminster, Burnaby and East Vancouver.

The local health areas that include South Vancouver and the Downtown Eastside also saw an abnormal number of deaths when compared with 2013 to 2020, as did Maple Ridge-Pitt Meadows, Mission and Abbotsford.

“There’s impact across the region, but really it’s New Westminster, Burnaby, East Vancouver, the Downtown Eastside — those are the areas where we see these bigger differences between heat dome deaths and the comparator group,” Henderson said.

Data from the BC Coroners Service shows that New Westminster, Chilliwack and Burnaby had the highest rates of death per capita during the heat dome.

Henderson looked at environmental factors like how much green space is in a neighbourhood, how close residents are to bodies of waters and how dense the buildings are.

She said the availability of neighbourhood green spaces was the biggest factor in determining how much risk residents are exposed to during extreme heat events.

Henderson also studied which pre-existing health conditions put people at risk, looking at 678 people who died during the heat dome, likely of heat-related causes. She compared those cases with deaths during a similar summer period from 2013-2020.

Henderson found that people with schizophrenia were at four times higher risk during the heat dome. People with substance use, depression and mood or anxiety disorders were also more at risk.

In contrast, Henderson did not find that people with a range of cardiovascular conditions were at higher risk, a result she said she found surprising and required more study.

People with Alzheimer’s and dementia were also not at higher risk, perhaps because they are more likely to be living in a care home or be cared for by a family member, Henderson said.

The vast majority of people who died during the heat dome died in their own homes, and Henderson said there needs to be more understanding of just how hot it can get inside. Using data from thermometers inside some Abbotsford homes, Henderson showed how temperatures climbed to around 40 C during the heat dome inside homes that didn’t have air conditioning, and they continued to get hotter even though temperatures outside were cooling down. 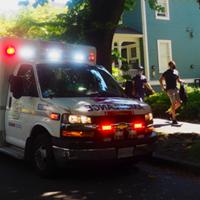 The heat dome is the kind of weather event scientists say will become more common because of climate change, and Henderson said B.C. needs to be better prepared for next time.

Henderson said the media needs to do a better job communicating not just that temperature records are being broken, but that extreme heat waves are as dangerous as hurricanes and ice storms.

More work needs to be done to reach people who are socially isolated, Henderson said. B.C. could create a registry of those people and connect them with organizations that work with vulnerable people to make sure they’re not forgotten during heat waves or other climate-related disasters.

“We can look for seniors who are living alone,” Henderson said. “We can look at those individuals who are not using the health-care system as much as we’d expect them to, given their age and location.”