Vancouver’s Heart of the City Festival will be able to offer more in-person events this year as COVID-19 restrictions ease.

That’s a relief to organizers, who know how important the festival is to provide community connections to people who live in the Downtown Eastside. Audiences will still be kept small, and many events will also be offered online.

“We did get a lot of attendance online at the festival last year, but that attendance tended to be people in the community that had access to computers,” as well as people who don’t live in the neighbourhood, said Terry Hunter, the festival’s executive director.

Many of the indoor events this year will be held at the Carnegie Community Centre, a central gathering point in the neighbourhood. The Carnegie will also host an outdoor stage for musical performances.

Like last year, festival organizers have set up a viewing room at Carnegie Community Centre where community members will be able to watch performances that have been recorded before or during the festival.

The annual festival offers theatre, spoken word and musical performances as well as art installations, workshops and storytelling, all produced, performed and written by people who live in the Downtown Eastside or have close connections to the neighbourhood.

This year, the theme of the festival is “Stories We Need to Hear.” The theme “calls on us to listen more closely to one another and especially to our Indigenous sisters and brothers as tragic stories they have always known are uncovered to the rest of us,” said Gilles Cyrenne, president of the Carnegie Community Centre Association. 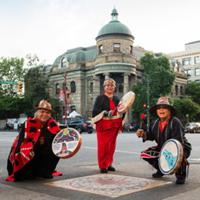 The festival guide is packed with performances, readings and workshops that will take place from Wednesday to Nov. 7, but Hunter highlighted a couple of events that have a special connection to the community.

For the We Live Here art installation, Radix Theatre filmed 20 Downtown Eastside artists creating art, then sped up the footage. The films will be projected onto the Lim Sai Hor Kow Mock building at 525 Carrall St.

The Honouring our Grandmothers Healing Journey is a multi-day event at the festival organized by Steve Lytton, a longtime activist in the neighbourhood and a frequent collaborator on Heart of the City events.

Hunter said the project grew out of conversations Lytton was having with his relatives about their grandmothers and aunts — women who had come to the Downtown Eastside in the 1950s and ’60s.

“Many of them had died down here and fell on hard times,” Hunter said. “There was a lot of shame within the family about the women, where their life had taken them.”

To heal that shame and honour the lives of the women, participants in the project have gathered memories and stories and will take part in three days of ceremony and sharing stories.

To see a full program guide for the festival, visit Heart of the City Festival.