British Columbia is on track to reach about 3,000 daily COVID-19 cases and strain hospital capacity by the end of May if further measures aren’t taken to reduce infectious contacts.

More transmissible variants of concern now make up about 60 per cent of new cases in the province, new epidemiological modelling confirmed, and are driving infection from workplace clusters and social gatherings to households.

But provincial health officer Dr. Bonnie Henry said today more restrictions to limit travel and socializing or changes to the province’s vaccination strategy are not necessary.

“The things that stop transmission are the same,” said Henry, urging people not to socialize except in small outdoor groups and follow recommendations about not travelling.

Henry said people’s contacts are currently at 60 per cent of pre-pandemic levels. That needs to be cut to at most 40 per cent to slow transmission and ease pressure on hospitals, she said.

On Wednesday, a group of experts and academics released independent modelling that warned a dramatic reduction in transmission “is needed to avoid further increases in hospitalization, ICU, and death rates.”

Without a sharp reduction in transmission, cases will be “overwhelming hospital capacity,” the BC COVID-19 Modelling Group wrote.

When asked by The Tyee why further restrictions are not being taken to protect the health-care system, Henry said measures taken in late March to halt indoor dining and group fitness are having a small impact already, alongside measures to curb workplace clusters.

“We are reducing the transmission in our communities a little bit,” said Henry. “Those are having an effect, but we cannot let up right now.”

She said the expert report’s calls for drastic contact reduction measures did not consider the impact of current efforts which, she said, could see new cases plateau at under 1,200 a day.

B.C. is now beginning to vaccinate first responders and law enforcement workers in high transmission communities like Surrey and Windermere, and will begin targeting school staff in high-risk communities in the coming weeks, she said.

Vaccinations among seniors most at risk for death and serious illness are already bringing down hospitalizations and deaths in that age group, but more adults aged 40 to 59 are being hospitalized as the pandemic’s burden shifts in the third wave.

Between the age-based rollout for the general population and targeted workplace and community immunization, about 1.2 million people have received at least one vaccine dose.

But the expert working group challenged the province’s approach, saying it should be giving priority to people who are most likely to have a lot of daily contacts that risk transmission, like retail workers.

The vaccination program “needs to swiftly target those with the most contacts so that infection and hospitalization rates can be reduced over the next two to three months,” it said.

Henry expressed confidence that current measures and vaccine strategies would allow B.C. to bend its pandemic curve down again for the third time. 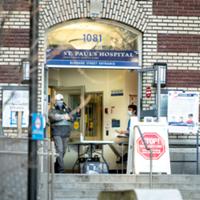 Is BC Ready for a COVID Wildfire?

When asked why measures in place for months, some since November, are being relied upon to change behaviour in the face of more transmissible variants, Henry said current case numbers are a “wake-up call.”

She did not answer questions about what the province is doing to signal the renewed importance of following existing guidance, or why the province would not mandate a non-essential travel ban.

“It’s a different game right now,” said Henry. “But we need to regroup, and we need to remember that we are in this storm together.”

Expert modelling, however, continues to warn current measures are insufficient as variants change the risk of every interaction.

“Delays in our collective action allow [variants of concern] to rise to higher levels and have more cumulative impact,” said the report.