But despite a month of rising case numbers, no new measures have been introduced and Henry also suggested the province may begin to slowly lift some restrictions on outdoor gatherings and sports in the coming weeks.

There are currently 87 active variant cases in B.C., concentrated in the Lower Mainland, and the source of about a quarter of all cases hasn’t yet been identified.

The large number of new cases each day and the spread of variants are a concern, Henry said last month.

But B.C. has yet to introduce additional restrictions since the current steady uptick began in early February.

“We’re not out of that woods yet, but we know a lot more about these cases and where they’re occurring.”

While there has been a steady increase in the number of COVID-19 cases, hospitalizations and deaths have remained relatively stable. On Monday, 240 people were in hospital and 66 of those were receiving critical or intensive care.

Health Minister Adrian Dix defended the province’s record and the “significant measures” taken but acknowledged the current level of new cases is alarming.

“Our case numbers are persistently high,” he said. “In our heads, in our hearts, we know this is not and cannot be our new normal.”

The province’s vaccination effort, which began Phase 2 on Monday by offering seniors 90 and over and Indigenous Elders over 65 the chance to book vaccination appointments, has been portrayed as a beacon of hope in recent briefings.

“We have to be able to look ahead,” said Henry.

The province said last week all adults in B.C. will receive a first dose of vaccine by the end of July, two months earlier than predicted.

But last month The Tyee reported on the importance of limiting transmission to ensure vaccines are effective as COVID variants emerge.

“It’s astonishingly incredible that we have these vaccines already, so we’re really fortunate in that regard,” said evolutionary geneticist Jeffrey Joy at the University of British Columbia in an interview. “But I think we have to be a little bit patient; we have to be patient to maintain other things that limit the spread of the virus.” 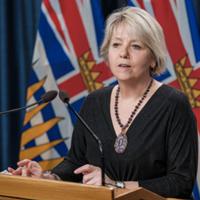 As BC COVID Cases Rise, Health Officials Say Better Days Are Ahead

"Obviously what we’re doing in British Columbia is not having the desired effect. We cannot have 650 cases a day, and we cannot tolerate it until the vaccine kicks in and produces community-based immunity, we’re weeks and months away from that,” he said.

Henry said March will be critical in assessing whether rapid growth in cases and variants emerges.

“We’ve shown that what we’re doing is working to prevent a rapid takeoff so far,” she said. “But we have a lot of transmission in our communities still.”