A patchwork system of poisoned drug alerts across British Columbia is putting users at risk, say advocates, with some health authorities failing to provide important information that could save lives.

Each health authority, working with partner agencies like first responders and research groups, is responsible for developing its own plan to notify users when poisoned illicit drugs are circulating in a community.

That’s led to major differences in the information available to users, and the way it’s provided.

Frontline workers say more detailed alerts could help save lives. Those who designed the systems say they have to prioritize getting the information out quickly.

In the Island Health region, overdose alerts are shared on the health authority’s social media channels and the BC Centre for Disease Control’s Toward the Heart website.

“The intent is to provide the information to a wide range of individuals, including those who use substances, family members, friends and co-workers, in an effort to help prevent and reduce harm associated with consuming substances,” he said in a statement.

Typically, an alert from Island Health tells people when there has been an increase in overdoses in a certain part of the health authority — for example, an overdose alert has been in place in Greater Victoria since Nov. 3 — and offers general advice on how to use drugs safely.

But the alerts offer only the most general information.

“There is an increase in overdoses in the Greater Victoria area from opioids and stimulants, increased risk with injection and inhalation,” a recent alert noted.

Alerts from other health authorities include specific information on which drugs are poisoned, what they look like, and more details on where they have been found. And they are delivered by text and email to substance users.

Wharton said Island Health sends the alerts to staff at the Cool Aid Society and a framed poster containing the alert and harm reduction tips is posted in the building.

But the advisories don’t lead to more people using the overdose prevention unit where she works, Wharton said.

“People are always a lot more receptive to stats, I would say. They want a basis to the information,” said Wharton.

“If you were able to say, ‘Well there’s been about 50 people in the past week or so,’ people would probably be… a little more cautious. But just saying there’s an overdose advisory, I think a lot of people do get a little bit flippant or apathetic in a way, because they think it’s just another one.”

In addition to concrete statistics, Wharton also wishes that overdose alerts would contain the exact location an increase is detected — a specific municipality rather than “Greater Victoria” — and more details on what the particularly deadly drugs look like.

Wharton says that before COVID-19, between 70 and 120 clients visited her facility’s supervised consumption room each day.

But at the height of the pandemic, fewer than 10 people were showing up to use safely, even as BC Coroners Service reports showed record high numbers of overdose deaths.

Health authorities were issuing alerts that drug overdose deaths were on the rise. But Wharton says the alerts made no difference to how many people attended the overdose prevention site to consume drugs safely during the pandemic.

After Victoria police seized a kilogram of highly-concentrated fentanyl this month, Stanwick extended an existing general alert about the possibility of toxic drugs.

While pictures and videos of the fentanyl were made available to media at a police briefing on the subject, the Island Health overdose alert does not contain those images.

At a press briefing last week, Stanwick said Island Health harm reduction workers are looking at ways to use technology to help address the overdose crisis and improve the way communities are alerted to an increase in overdoses.

But other health authorities are already providing more detailed information.

Overdose and drug checking alerts recently issued by Interior Health authority include descriptions of the toxic drugs circulating in the community, along with a photo of the drug if available.

In the Vancouver Coastal Health region, residents are able to sign up for RADAR Drug Alerts that are texted to their phones to let them know when contaminated drugs are circulating in nine specific regions on the Lower Mainland.

The service also works in reverse, as residents can anonymously submit overdose reports to the health authority by texting "bad dope" to the same number.

Residents in the Fraser Health region are able to sign up for overdose alerts via email. These alerts also contain information about what type of drug is causing overdoses and what that drug has been contaminated with, if that information is available to the health authority.

Drug alerts from the Northern Health authority have also included information about what type of contaminant made street drugs particularly toxic.

The First Nations Health Authority is the only health authority to not issue any overdose alerts, but it shares information with other authorities and alert partners.

Hugh Lampkin, a member of the Vancouver Area Network of Drug Users, says the text alert system used in Vancouver, with its detailed information, sets a standard for what other jurisdictions should be doing.

“You just can’t put out a warning that says there’s dangerous drugs in the street,” Lampkin told The Tyee. “That’s fine, but what drugs?”

“Here in Vancouver, when they send out warnings, they usually have a description of the colour, whether it’s an opiate, and what area most of the overdoses have occurred in.”

Substance users might have been getting their drugs from the same dealer for years, but one bad batch could cause them to overdose, Lampkin said. That’s why it’s so important to include descriptions of toxic drugs in the warnings, he added.

Some of the disparities in what kind of information is included in alerts comes down to health authorities not always having specific details.

Dr. Jane Buxton, the developer of the province’s Drug Overdose and Alert Partnership, says it is easier to identify a substance that is causing a spike in overdoses when it has a distinguishable feature — colour, textures or odours. But often it’s less clear which drugs are dangerous.

Buxton created the partnership between health authorities, first responders, drug users and others as an efficient way to gather data and keep track of the province’s overdose crisis.

“It’s a little harder when we see a cluster of increased overdoses, but we’re not quite sure what it is. But we do feel we need to put that warning out,” said Buxton.

“So you have to weigh getting information out to those that need to know, compared to potentially waiting until you have complete data, which will be a lot longer.”

Buxton said the partnership relies on drug-checking facilities for information about which drugs are causing overdoses and where.

In the Island Health region, that information would come from the Canadian Institute for Substance Use Research at the University of Victoria, where scientists have set up the sole drug checking program on Vancouver Island.

But researchers say they don’t yet share those details with the public and currently only share monthly and quarterly reports on drug checking results with the alert partnership.

“We haven’t really figured out a way to convey that information that can be really useful for people who will be able to use it without also providing another disservice, and that disservice is basically how drug alerts can also feed into ongoing drug scares,” said Bruce Wallace, a scientist with the institute and associate professor at UVic.

“We also realize that there’s a real value in people knowing as much as they can about the unregulated market and that’s why we do drug checking.”

The main challenge, says Wallace, is that when overdose alerts are picked up by the media and shared online, they can include language that further stigmatizes drug use. The alerts can lead to “more of a crackdown by the police and the state on substances rather than… increasing access to a safer supply,” he said.

For now, the program offers drug checking services for individuals five days a week at a Victoria motel converted to supportive housing at the beginning of the pandemic. Wallace hopes these services will eventually be made available on a broader scale across Vancouver Island.

Buxton understands the concerns about stigma but believes the alerts don’t pose an inherent risk as they are not typically shared through the media, where stigmatizing language can often make the problem worse.

She argues that news articles often use derogatory language and images of people being resuscitated on the ground in dark alleys. That increases societal prejudices against drug users, Buxton said.

“A lot of the stigma is because people don’t understand substance use and what a substance use disorder or addiction actually is,” said Buxton.

Buxton said changes to the alert systems could include expanding the text alert system currently in place in Vancouver and make that same system available to communities in other parts of B.C. 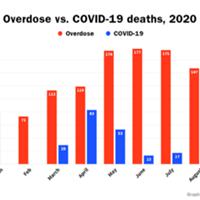 Lampkin believes it shouldn’t be difficult for other jurisdictions to copy the system Vancouver has in place.

“The warnings, you could send out like notifications. So, if you’re signed up to the system with your email or phone number, when these warnings come out you could be advised of them [by] text or email,” he said.

“I believe if you have even one person who reads the alert, it empowers them to know what’s going on. If they see it, they know they have to stay away from that particular type [of drug].”

As long as the messaging is delivered by experts, using language that does not cause further harm and add to the stigma, Buxton agrees individuals and families have a right to know when toxic drugs are making the rounds.

“I think anybody who has family who use these substances want them to be as safe as possible… we need to give people the tools and information to make informed decisions.”