On the same day Prime Minister Justin Trudeau said rail blockades protesting a pipeline through Wet’suwet’en territory must end, B.C.’s Environmental Assessment Office gave the Unist’ot’en, a house group of the Wet’suwet’en, 30 days to engage with the pipeline company or be left out of the assessment process.

The office found Coastal GasLink had not provided the information needed to allow the office to assess the project’s impact.

But it said that was because the company had been prevented from accessing the area to gather the information by Wet’suwet’en opposed to the project.

Discussions between the Wet’suwet’en and Coastal GasLink are unlikely to be easy to arrange, if they happen at all.

Opposition to Coastal GasLink’s LNG pipeline by Wet’suwet’en hereditary chiefs and their supporters have thrown the country into a national crisis. Blockades have closed major highways and railways over the past two weeks.

On Friday, Trudeau said the barricades erected across the country should now be removed.

The nationwide protests were initiated when the RCMP enforced an injunction by removing barricades and arresting 28 people along the Morice West Forest Service Road over five days earlier this month.

Seven of those were arrested at the Unist’ot’en Healing Centre, including Karla Tait, volunteer director of clinical programming.

In a news release, Tait questioned the timing of the province’s directive.

“It is very distressing, after we’ve faced assault rifles and endured arrests at the beckoning of CGL, to now be advised by EAO to work collaboratively with them to address these gaps. We urge the province to take this opportunity to respect the rule of law and follow the processes laid out to protect both our rights and the environment,” Tait’s statement said.

“We identified the gaps in CGL’s report months ago, by letters and in person. Had the province intervened to confirm the report’s shortcomings, they could have prevented the injunction enforcement, sparing us the violent removal from our lands and sparing the country the subsequent economic pressures of solidarity actions,” it continued.

“The continued presence of the CGL and the RCMP on our territory is unlawful and this decision by EAO gives the province grounds to call for their immediate evacuation.”

The Unist’ot’en described the Environmental Assessment Office’s announcement as a victory.

“By rejecting CGL’s final report, the EAO has denied CGL authorization to proceed with construction in the heart of the Gidimt’en and Unist’ot’en yintah [land] central to the ongoing eviction of pipeline contractors by Wet’suwet’en Hereditary Chiefs,” its statement said.

However, in a media briefing Friday afternoon the province denied that the report, required as a condition of the company’s 2014 environmental assessment certificate, had been rejected.

Coastal GasLink is required to outline social, economic, environmental, health and cultural impacts of the pipeline on the Morice River Technical Boundary Area, which includes the Unist’ot’en Healing Centre.

The company was unable to do that since 2012, as it had been prevented from accessing the area by Wet’suwet’en hereditary chiefs and their supporters.

An interim injunction awarded to Coastal GasLink in December 2018 was enforced by the RCMP on Jan. 7, 2019. Police removed barricades on the Morice forestry road and arrested 14 people.

Following the arrests, the Unist’ot’en allowed Coastal GasLink to access the territory. The company submitted its report to the Environmental Assessment Office in November.

During Friday’s briefing, the Environmental Assessment Office said the timing of the 30-day period is a “coincidence.” It said the agency works at arm’s-length from government and doesn’t take political considerations into account. 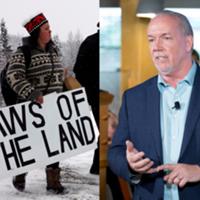 In an emailed statement, the office said it had issued a letter to CGL outlining specific aspects of the report that need to be updated and had also contacted the Unist’ot’en and Office of the Wet’suwet’en to encourage them to engage with the company.

“The EAO seeks to ensure that adverse effects of projects are appropriately minimized or avoided,” the statement said. “Mitigation measures in management plans required by Environmental Assessment Certificates are important mechanisms for these binding requirements.”

“As expressed in these letters, the EAO is aware that there may be additional information that Dark House [Unist’ot’en] and the Office of the Wet’suwet’en may be able to provide to Coastal GasLink for inclusion in their second condition #1 report, to further minimize or avoid the effects of project construction.”

The agency said Coastal GasLink has been asked to provide detailed records of attempts at consultation, something that hadn’t been done in the past.

If the Unist’ot’en do not agree to discussions with CGL, the Environmental Assessment Office will decide if it accepts the report and the company’s efforts.

In the meantime, pre-construction activities have already been conducted in the disputed area and will continue during the 30-day period.