In June 2017, tensions were running high in the Balmoral Hotel as residents grappled with the fact that they had just days to leave the crumbling building located in the heart of Vancouver’s Downtown Eastside.

Wendy Pedersen, an organizer with the SRO Collaborative, remembers how Mark Eriksen would help keep tenant meetings on track. Pedersen had first encountered Eriksen living in the hallway at the Regent, a single-room occupancy hotel across the street from the Balmoral; later, she helped him get a room at the Balmoral.

When the city finally shut down the Balmoral after finding it was at risk of collapsing, Pedersen was dismayed — tenants and advocates had been pushing the city to force the owners to fix it up, not shut it down. A year later, the city also ordered the Regent to close.

When everyone who rented a room in the buildings was rehoused in better buildings, Pedersen thought it was in some ways a success. But today, she’s not so sure.

“People who really know the dynamics of the community know those buildings being closed is contributing to the increase in street chaos,” Pedersen said.

“And sure enough my friend Mark was stabbed, and he died.”

Eriksen was attacked near Main and Hastings just before 8 a.m. on June 27, 2017, just a few weeks after the Balmoral had been emptied.

Last week, Vancouver city council voted to expropriate the Regent and the Balmoral from the owners, the Sahota family. It’s the first time the city has ever used that power against a building owner because they let their buildings fall into uninhabitable disrepair.

Community members are applauding that move, but are warning that the Downtown Eastside continues to face a steady loss of SRO rooms that rent at shelter rates — a loss that new social housing building hasn’t kept pace with.

Pedersen traces an uptick in homelessness, violent crime and street disorder, and the growth of a tent city at Oppenheimer Park to the sudden loss of the 325 rooms the Regent and Balmoral provided. There’s also been a steady loss of rooms at other hotels that no longer rent at the welfare shelter rate of $375 a month.

Beyond the tenants who officially paid rent for a room at the Balmoral and Regent, Pedersen estimated that between 700 and 1,000 people found shelter at the Regent and Balmoral every night, either as guests of tenants or in the hallways of the aging buildings.

In 2017, the Carnegie Community Action Project tracked a total loss of 500 shelter-rate rooms in the Downtown Eastside. In 2018, with the provincial government funding more social housing, including temporary modular buildings, there was a net increase of 77 units. The average rent of an SRO room (usually a small room of less than 320 square feet, with no kitchen and a shared bathroom) is now $663 per month.

“It’s just a continuous loss of housing,” Pedersen said. “Every year, there’s one or two SROs up for sale, and they’re slowly converting to higher-income rental housing.” 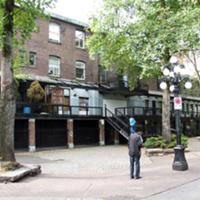 Reached by phone, the manager of the Pacific Rooms said owners Jim and Betty Wu were not available because they were on vacation, but they are no longer planning to sell the building. Paul Bembin said another buildings the Wus recently sold, the United Rooms on Cordova St., has remained an SRO.

Mina Angelicola owns the Silver Avalon. In an email, her granddaughter, Jenny Konkin, said a non-profit Konkin founded, Whole Way House, no longer operates the Avalon. Konkin did not respond to follow-up inquiries about why the building was up for sale. The owners of the Arno could not be reached for comment.

Jean Swanson, a Vancouver city councillor, said she’s concerned when she sees language like “micro-units,” “investment property” and “development upside” in the listings.

“What’ll happen if they get bought is landlords will get rid of the tenants by hook or crook, and rents will go up because we have no vacancy control,” Swanson said, referring to a type of rent control that would prevent landlords from raising the rent more than a set amount when tenants move out.