With seven months until the federal election, the NDP is facing the loss of almost one-third of its incumbent MPs across Canada, the biggest proportional hit among the three main parties.

The most recent to announce he’s stepping down is Nathan Cullen, the popular MP for Skeena-Bulkley Valley in northern British Columbia and a former NDP leadership candidate.

His announcement sparked speculation on social media and in news stories. Even the normally staid Canadian Press observed, “Cullen’s departure is a blow to NDP Leader Jagmeet Singh, who just won his own seat in the House of Commons in a British Columbia byelection.”

But New Democrats warn against reading too much into the departures.

Cullen, who endorsed Singh in the 2017 leadership race, wished the leader and his NDP colleagues the best in the coming election and said he was leaving for personal reasons. In his announcement, he mentioned his wife and eight-year-old twin sons and said he felt it was time for someone else to represent the riding.

The announcement was only the latest departure for the party in the province. Last month Murray Rankin, the MP for Victoria and an environmental lawyer who’d been an effective critic, said he wouldn’t run again.

That means five of 14 NDP MPs elected in B.C. in 2015 won’t be running in the October election.

Nationally, at least 13 NDP members won’t be running. That’s 30 per cent of the 44 who won for the party four years ago.

That compares to 11 out of 184 Liberals who are leaving, or about six per cent of the government caucus. For the Conservatives, it’s nine out of 99, which is less than 10 per cent.

Randall Garrison, the MP for Esquimalt-Saanich-Sooke, suggested on Twitter that the number of departures for the Liberals and Conservatives will climb as the election nears.

“Many strong New Democrats going for comebacks and many strong new candidates already nominated,” he wrote.

Malcolmson said in an interview that she sees no pattern in the departures. While the numbers may be adding up, they shouldn’t be seen as criticism of Singh or the party, she said.

“Each person has got fantastic reasons,” she said. “For me, I never thought I would not be running again in the fall of this year, but the premier and Leonard Krog convinced me that the way to implement the work I’ve been trying to do on coastal protection and affordable housing, that I’ve been unable to get the Trudeau Liberals to agree to, that being inside government is the way to get that work done. That’s my reason.”

It makes sense that Cullen is leaving considering the age of his children and the 15 years he’s served as an MP, she said. Many of those leaving have served for a long time, she added, and there was no surprise when former NDP leader Tom Mulcair chose to resign. Quebec MP Romeo Saganash, who is Cree, has spoken about how exhausting he finds serving in a colonial institution.

“Everybody’s got their reasons,” Malcolmson said. “I’ve been honoured to serve with them all. I support Jagmeet Singh absolutely. I did for leadership, and I do still now. I think we’re going to have a really strong result in the election ahead.”

Bill Tieleman, director of communications for NDP premier Glen Clark in the 1990s and a government relations consultant, said each retiring MP has good reasons to go, but the numbers are significant.

“Certainly, part of it is a transitional and transformative period for the NDP, which inevitably happens in every party,” he said.

The transformation has a positive side, he added. “You can only have more younger members and diversity and energy when you do have new candidates. It’s the nature of politics.”

There are a few reasons the number of departures might be higher than normal, Tieleman said. Over the last seven years, the party has changed leaders twice, from Jack Layton to Mulcair and from Mulcair to Singh. “One leader change is often a trigger for people to leave, but two is definitely much more salient for people making a decision on how much longer they want to stay in politics.” 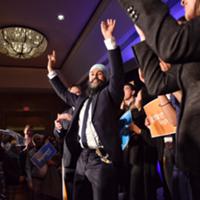 Jagmeet Singh’s Next Hurdle: Define His Party in an Era of Extremes

After the 2011 election the NDP had reasonable expectations that it might form government, so fewer people may have left before the 2015 election, he said.

Recent polls wouldn’t be encouraging for anyone who was deciding whether to stay, Tieleman acknowledged. One aggregator has the NDP at 16-per-cent support, which would see the party lose seats.

With the Liberals looking more vulnerable, he said, more of their MPs may yet choose not to run again. Conversely, Conservatives who think they have a shot at forming government may decide to stick around. “Those are factors, no question.”

Ultimately each MP will make their decision on whether or not to run based on various considerations, Tieleman said.

“It’s easy to say ‘Jagmeet Singh isn’t high in the polls so NDP MPs are leaving.’ That’s the most sort of facile and simple explanation, but it’s always more complicated than that.”