Robinson acknowledged more needs to be done, but said it was important to begin improving protections for renters.

"We've been taking action all the way along and this is sort of the next phase of action that we're taking," she said.

The previous government ignored the needs of the 1.5 million renters in the province, she said. "They've waited a long time to address some of these gaps in the legislation, so I wanted to move forward, and we'll continue to move forward."

The Tenancy Statutes Amendment Act, 2018, that the government introduced last week requires landlords to give tenants four months notice of an eviction due to a renovation or demolition instead of the current two. It also increases the time tenants have to dispute an eviction notice from 15 days to 30.

Compensation for "bad faith" evictions where people are evicted for a renovation that never happens is increased from two months rent to 12. And in multi-unit buildings, tenants who had been evicted would have the first right of refusal once a renovation is complete, though their rent would be at the market rate.

The bill also provides support and better financial compensation for tenants who are displaced from manufactured home parks due to redevelopment. Some 60,000 people live in manufactured homes in the province.

While the government promoted the changes as a positive step, an advocate for tenants told The Tyee the new rules would ultimately do little to make renters more secure.

"What I fail to see is how any of these changes actually keep people in their homes," said Danielle Sabelli, a lawyer with the Community Legal Assistance Society in Vancouver.

Increasing the notice period doesn't change the fact that landlords can evict people from their homes, she said. Nor would giving former tenants an opportunity to move back into renovated units help much if landlords can hike rents significantly after evictions, she said.

Sabelli said B.C. needs a law like Ontario's, which gives former tenants the right to return to renovated units at the rent they had been paying.

Asked about the concerns, Robinson said action was needed and the measures will improve life for renters.

"Renters have been waiting 16 years for a government that's going to listen to them and start taking action. I didn't want to have to wait to do tons more research, hold back this piece of legislation."

The right of first refusal provision will help, she said.

"Where people have made their home in a neighbourhood, their kids are going to the school down the street, this is where their doctor is or whatever the case may be, or where their community is, and legitimately there needs major renovations… that there's an opportunity to come back to their community."

It also gives people a chance to check whether a landlord who evicted them so a home could be renovated has actually done the renovations.

"It does allow [a renter] to take a look and see if they actually needed to move out. It's an opportunity to see if there was a bad faith, so it holds landlords a little bit more accountable," she said.

The government needs to find a balance between protecting renters and allowing landlords to invest in improving their units, Robinson said. "We've set up this rental task force to hear more, what more do we need to be doing in order to find the balance, for both landlords and tenants. This is a relationship that needs to work for everybody."

Robinson said she hopes people will suggest solutions to the task force. She expects it to report on its findings and make recommendations in the fall.

The government has been working to make life better for renters since it came to office, she said. "When we came in we infused $7 million into the Residential Tenancy Branch to bring in more arbitrators, make sure there was a compliance unit that didn't exist before, make sure that it was able to do what it was supposed to do."

The government has closed a fixed-term lease loophole that let landlords impose increases greater than the amount allowed by the law. And it got rid of the geographic rent provision that allowed landlords to seek larger increases in hot rental markets, she said.

"We're going to continue addressing this relationship between renters and landlords and making sure it works better for everybody," she said. 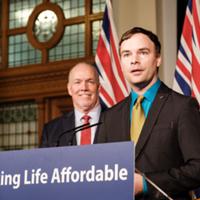 One of the main challenges is vacancy rates below one per cent in much of the province, Robinson said. While most landlords treat tenants fairly, she said, "There are some bad landlords who are taking advantage of a low vacancy rate and that's creating a significant amount of problem for us, for them, for renters and for everybody."

It would be healthier to have a vacancy rate between three to four per cent, she said. "It's going to take a whole bunch of things to get us there."

Few rental buildings have been built in recent decades and there's a need to increase supply, she said. The government is trying various means to encourage increased supply, she said. Legislation is coming this spring that will allow municipalities to zone areas rental only.

"There's lots to do. I'm not saying that we're done," Robinson said, adding the government is trying to take a comprehensive look at housing and is making changes where and when it can. "I think British Columbians have waited long enough."