According to the Alzheimer Society of Canada, 1,125,000 Canadians will have dementia in 20 years. The cumulative economic burden will be $872 billion, and the demand for long-term care will increase tenfold.

In 2008, just over 100,000 new dementia cases were diagnosed each year in Canada. By 2038, the ASC predicts more than 250,000 new cases each year. About half of those diagnosed with dementia will have Alzheimer’s disease.

Like death itself, such numbers don’t bear thinking about. Nor do we want to think about our own partners and children dedicating their old age to caring for us.

But a lot of experts are thinking hard about this problem, and one of them is 90-year-old neuroscientist Dr. Patrick McGeer. Now CEO of Aurin Biotech, McGeer had a long career at the University of British Columbia as well as a tumultuous one as a Liberal and Socred MLA and cabinet minister from 1962 to 1986. He may have dropped out of the public eye after leaving politics, but McGeer has kept very busy.

Since 1990, McGeer has been studying the causes of Alzheimer’s. Now, almost 30 years later, he says a simple test can identify those at risk, and an over-the-counter pain reliever can prevent it.

When we hear a strong claim, we expect strong evidence. And if the evidence holds up, we need to explore the implications.

McGeer’s evidence is indeed generally strong. In a recent review article in the Journal of Alzheimer’s Disease, McGeer and his colleagues summarize how their view of Alzheimer’s went from a “crazy hypothesis” in the 1980s to today’s widely accepted view that neuroinflammation causes damage to brain cells. That in turn results in Alzheimer’s.

In 1990, McGeer reported in the British journal The Lancet that patients using nonsteroidal anti-inflammatory drugs (NSAIDS) for rheumatoid arthritis seemed to develop fewer cases of Alzheimer’s than statistics said they should. Further research indicated that a major cause of neuroinflammation was a buildup of “amyloid-β” protein in the brain. Eventually, over years, this Aβ buildup destroys nearby nerve cells and results in Alzheimer’s.

Further research by McGeer and others established that NSAIDS — like aspirin and ibuprofen — could reduce the number of Alzheimer’s cases below the rate to be expected in a given group. But there was no effect unless the NSAIDS were administered well before the members of the group were statistically likely to be diagnosed with Alzheimer’s. Once diagnosed, Alzheimer’s wasn’t affected by NSAIDS.

McGeer and his team found a solution: Aβ may accumulate in brain cells, but it’s produced in all body tissues. A simple saliva test seems able to detect Aβ levels — and these can predict the likelihood that a given individual will develop Alzheimer’s. Some people produce low levels of Aβ all their lives, and don’t develop Alzheimer’s; other produce high levels, and are virtually certain to develop it.

In their review article, McGeer and his colleagues wrote: “A theoretical construct suggests the development of AD [Alzheimer’s] goes through six phases, each with decreasing opportunity for therapeutic intervention. Since the prevalence of clinical AD commences at age 65, the prevalence for actual AD disease onset can be hypothesized to occur at least 10 years earlier, or at age 55. Without intervention, the prevalence will then double every five years.... Any strategy which limits Aβ production, enhances its clearance, or prevents its aggregation, should be disease modifying. Effectiveness of treatment should be measurable by CSF Aβ levels returning toward normal.”

Assuming the hypothesis is accurate, if you were in your early 50s and found you had high Aβ, you could take an NSAID like ibuprofen every day to halt the progress of Aβ accumulation in your brain cells. At a daily cost of about five cents, you could literally keep your wits about you, long into your old age.

This is a promising glimpse of a possible preventive treatment, not a guaranteed end to Alzheimer’s. As several skeptical experts have said, the saliva test needs to be reproducible by others, and the proper dosage needs to be determined. Ibuprofen’s side effects can include nausea, diarrhea, heart failure, kidney failure and liver failure. Perhaps some other anti-inflammatory could work better, or a better version of ibuprofen could be developed. Much more research is needed.

And it’s pointless to start popping a daily ibuprofen or Advil right away, just as insurance. If you don’t need it, you may be needlessly exposing yourself to those side effects. Even if you’re at risk of Alzheimer’s, you may be taking more or less than you need.

Still, McGeer is highly optimistic. In an email exchange with The Tyee, he said that persons well past 55 could take the saliva test: “If you are cognitively OK, it is not too late to start” taking NSAIDS. (His group is also developing AUR1107, a treatment designed to stop Alzheimer’s even after onset.) Alzheimer’s is not the only form of dementia, but he believes NSAIDS should work on any that involve inflammation.

The key, then, would be confirming the validity of the saliva test and the efficacy of NSAIDS. McGeer estimates that when ramped up to a large scale, the saliva test would cost about as much as the DNA test you can get from 23andMe, which currently charges Canadians $249 for an analysis of their ancestry and genetic health. 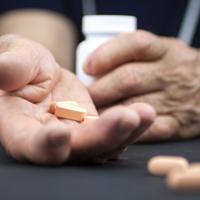 Yet Another Case for Universal Pharmacare

That’s about the cost of the new shingles vaccine Shingrix. Provincial health ministries are under a lot of pressure to cover the cost of Shingrix, and they could expect even more pressure to pay for the McGeer saliva test.

Any health minister not yet personally in the throes of dementia should leap at the chance to pay for both. Apart from the severe pain suffered by the victim, shingles also costs the health-care system for countless hours of doctors’ time. And a way to prevent Alzheimer’s — for $250 and a nickel a day — could save governments and taxpayers a good chunk of a trillion dollars. Health-care workers could devote themselves to other patients. Family members would be freed from years of unpaid caregiving duties.

Seniors escaping dementia would still cost money, of course. Quite apart from their other health problems, they’d need social support and entertainment, more programs at community centres — and very likely a ride to the polls every election. Our old folks, as an ever-growing demographic, would still be a problem.

But they would be a far better class of problem than they are now.