The Liberal government’s budget included information on some spending from a proposed infrastructure bank, but left Canadians in the dark about how the controversial bank will work.

Overall, the Liberals’ second budget Wednesday introduced few big changes. Spending will rise 4.8 per cent to $330.2 billion, while government revenues are forecast to rise 4.4 per cent to $304.7 billion. After a contingency allowance is concluded, the deficit is forecast at $28.5 billion, up from $23 billion this year.

The budget did contain some general information on how the government plans to spend $35 billion over the next 11 years through its Canada Infrastructure Bank, but few details on its operations.

Critics have complained the bank is part of a privatization push by the Liberals that will increase infrastructure costs while lining the pockets of big business. Most private partners will want an eight- to nine-per-cent return on any investments, which will result in higher costs and tolls and user fees, opponents warn.

On Tuesday a government spokesperson told The Tyee the budget would include more details on the infrastructure bank plan.

But David Macdonald of the Canadian Centre for Policy Alternatives said the budget failed to shed light on the government’s plans. There was actually more information on the bank in the fall financial update update last year.

“There’s even less detail in this budget,” Macdonald said. “It appears now we’ll have to wait for the actual legislation and the creation of the board of this new bank before we find out what are the long term plans in terms of driving P3s down the throats of municipalities.”

The infrastructure bank pops up repeatedly in the budget, without details.

For example, the government is ending the Public Transit Tax Credit, which allowed commuters to reduce their taxes by using public transit. The change will mean $223 a year in higher taxes for a person buying a monthly two-zone pass on Translink.

The credit was introduced to encourage people to use public transit, thus reducing greenhouse gases, but the government says it hasn’t worked.

Instead the government will provide $20 billion over 11 years through the infrastructure bank for public transit initiatives.

Former NDP finance critic Guy Caron warned that since wealthier communities can get bank loans at low rates, the infrastructure bank will end up preying on poorer municipalities, saddling residents with tolls and user fees.

The budget documents essentially say there will be an infrastructure bank starting with $35 billion from Ottawa, the government is looking for people to run it, and there will be a “data initiative” to help direct dollars from the bank.

“Leveraging the expertise and capital of the private sector, the Canada Infrastructure Bank will provide better results for middle class Canadians,” it says. “Public dollars will go farther and be used more strategically, maximizing opportunities to create the good, well-paying jobs needed to grow the middle class now, and strengthen Canada’s economy over the long term.”

Pressed by reporters for more details during his budget scrum, Finance Minister Bill Morneau was just as vague.

Morneau said the budget does have some details and confirmed private money will be involved.

“What our goal is with this bank is to make sure we can actually do more infrastructure, make a difference for public transit, so we can actually have an easier way for people to get back and forth to work,” Morneau said. 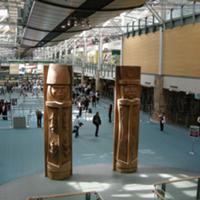 Is Justin Trudeau Picking Your Pocket?

But Macdonald said the government’s lack of details could be a sign it is backing away from the privatization aspect of the bank.

Cities, such as Vancouver, have opposed the proposed sale of their airports to raise money for the bank.

“That was really tamped down in this description,” he said, speculating pushback from cities wanting funding rather than high interest loans may have slowed the Liberal plan.