Wade Davis says that while he doesn’t regret endorsing Justin Trudeau’s bid to lead Canada last year, he is “profoundly disappointed” with the prime minister’s approach so far to industrial development projects in British Columbia.

Davis is the author of several popular books, an anthropology professor at the University of British Columbia, the B.C. Leadership Chair in Cultures and Ecosystems at Risk at UBC, and was explorer-in-residence for the National Geographic Society.

During the 2015 election, Liberals bragged about an endorsement from Davis, who said about Trudeau in a YouTube video, “He’s a visionary who can truly be the architect of a new tomorrow.”

Davis, who has called for a “war” on global warming, had reportedly contributed to the Liberal Party’s environment plan and introduced Trudeau when he unveiled that plan in Vancouver. In the endorsement video, he praised Trudeau’s commitment to fighting climate change and making decisions based on science.

Speaking on the phone the week after Trudeau announced his government’s approval of Kinder Morgan’s plan to twin its Trans Mountain pipeline from Edmonton, Alberta to Burnaby, B.C., Davis said he was reluctant to criticize Trudeau on the basis of that one decision and that he recognizes the prime minister needs to find a balance as he governs for the entire country.

He also said that he was pleased to see the commitment Trudeau made in signing the Paris Agreement on climate change, which aims to keep the global temperature rise below 2 C, despite the resistance from Saskatchewan.

“What does disturb me is the federal Liberal government has come out in favour of virtually every major industrial project on the books,” Davis said, adding that the decisions appear calculated rather than principled. “I think there’s a level of realpolitik the Liberals are playing. I think it’s profoundly disappointing.”

Davis said that among the disappointments, he’s not personally particularly concerned about the Trans Mountain pipeline expansion. North America is already crisscrossed with pipelines, which in general have a very good safety record, he said. “My personal opinion is pipelines are eminently safe.”

At the same time, it is clear the project lacks the “social licence” that Trudeau at one time said was necessary for such projects to proceed, Davis said. “The people clearly oppose it. They don’t want it to happen.”

More galling on a personal level was the approval of the Woodfibre LNG processing and export facility proposed for a former pulp mill site on Howe Sound, seven kilometres southwest of Squamish, he said.

Davis, who lives nearby on Bowen Island, has written about the danger of a liquefied natural gas spill over water and pointed out that if the project were proposed in the United States, that country’s coast guard would consider it and the associated tanker traffic routes too close to population centres to be approved.

Every community on Howe Sound — which has in recent years seen a return of herring and whales as it recovers from past industrial pollution — was against the proposal, he said.

Local Liberal MP Pamela Goldsmith-Jones knew the concerns and would listen, but seemed powerless to change the government’s direction, he said. “She knows as well as anyone the constituency was overwhelmingly opposed to the Woodfibre project.”

Davis and others unsuccessfully sought a meeting with federal Environment Minister Catherine McKenna when she was in Vancouver last year, he said. “We just were blown off. That’s what happened.... We never had an opportunity to present or discuss these safety concerns.”

While Davis said the lack of listening was a disservice to the public, he also took it personally. “I felt it was a personal affront to me given how I’d stood for the prime minister,” he said.

Also worrisome to Davis was the federal government’s approval of BC Hydro’s Site C dam on the Peace River, a project that environmental groups and area First Nations are challenging in court.

The project will flood some 6,500 hectares of farmland. Davis said that most people who have looked at the project agree it is not needed.

And then, said Davis, there was the government’s environmental approval in September for the Pacific NorthWest LNG plan to build a liquefied natural gas terminal at the mouth of the Skeena River.

The project — pitched by a consortium largely owned by Petronas, Malaysia’s national oil company — has been strongly opposed by environmental groups and some First Nations concerned about an increase in greenhouse gas emissions and the impact on wild salmon.

In fact, the only project Trudeau’s Liberals have blocked is the Northern Gateway pipeline that Enbridge proposed to transport diluted bitumen from northern Alberta to the coast at Prince Rupert, a project that was widely thought to be dead long ago anyway, Davis said.

“The bottom line is every other major industrial infrastructure project they have approved,” he said. “It could be a different story, in my opinion, if the federal government was looking at Site C and saying we don’t need that project,” while also rejecting the Woodfibre LNG proposal, he said.

Instead, at every opportunity the government has approved major industrial projects despite the concerns and opposition of local people, Davis said.

“I’m not the only person disillusioned by this treatment,” he said. Many of the projects lack social licence, and First Nations in particular clearly aren’t experiencing the new relationship Trudeau promised when he was campaigning, Davis said.

Noting that the 17 seats the Liberals won in B.C. in 2015 was a large gain for the party, he added, “It’s almost as if they’re disregarding that contribution of B.C. to their victory. I think that will come back to haunt them.”

Despite his disappointment, Davis still feels endorsing Trudeau was the right thing to do in 2015. “I don’t regret the endorsement at all. I think Justin’s a great guy and he’s going to be a good prime minister.” 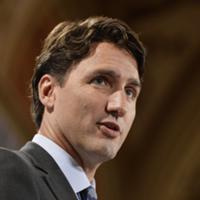 At the time Davis made the endorsement, Trudeau was third in the polls behind the Thomas Mulcair-led NDP and the governing Conservatives under prime minister Stephen Harper. “To me, the absolute priority at that time was to replace the Harper government. Many Canadians felt that way.”

Davis said he was more comfortable with Trudeau than he felt with the NDP. “I did not have any confidence in Mulcair or the NDP being any less politically motivated if and when it became time for them to govern,” Davis said, adding Mulcair would likely have made the same compromises that Trudeau has.

“The one thing we all know is Harper would have been a whole lot worse,” he said.

The country needs leadership that at a fundamental level understands that the Earth isn’t for people to exploit, Davis said. Instead of focusing on the next election, visionary leaders think ahead to the next generation and lead towards a future that the public may not yet be able to see, he said.

Asked if he thinks that’s the path we’re on with Trudeau leading, Davis said, “I think the jury’s out. At the moment I would go as far as saying there may still be the illusion in Ottawa we are walking toward that future. What I see is the weight of history and conventions keeping us shackled to the past.”

Time will tell if Trudeau can overcome that weight and guide the country through the needed transition, Davis said.

“The measure of the individual will be how he finds a way out of the miasma of governance to truly spark a new dream of tomorrow,” he said. “That’s going to take some very courageous decisions, and government is all about compromise, and compromise has very little to do with courage.”

So far though, the compromises Trudeau has made appear to be a departure from the clean, direct and transparent leadership needed to set Canada on the right path for the future, Davis said.

“These decisions have not inspired a lot of hope.”