Individuals dependent on the provincial government for financial assistance in British Columbia have about $21 a week to spend on food, according to the organizers of the Welfare Food Challenge that launched this week.

Asked if $21 a week is enough for food, the minister for social development Michelle Stilwell said, "I think certainly the comprehensive support system we have in place for individuals on income assistance and persons with disabilities helps support them in a multitude of ways."

So, does that mean Stilwell thinks $21 a week is plenty for food? "It's more important to ensure we are providing services and supports for individuals on income assistance that will help them have their best foot forward, to ensure they have an opportunity to find employment to make a better life for both their families and their children," she said.

When Raise the Rates organized the first Welfare Food Challenge in 2012, the advocacy group figured welfare recipients had about $26 a week for food. That amount has since dropped, as assistance rates have remained frozen in B.C. despite increases to expenses like rent and transportation.

Stilwell responded to a question about the drop by saying, "When we have an opportunity to look at increasing the rates, we will look at that at a time that's fiscally possible."

'They make a political choice'

Raise the Rates organizer Bill Hopwood said the minister is out of touch with the reality for people living on welfare.

"B.C. has some of the worst poverty in Canada," he said, adding that one out of five children live in poverty in B.C., the only province in Canada without a poverty reduction plan.

It has been 8.5 years since welfare and disability rates were increased. MLAs have received raises during that time, Hopwood noted.

"The money is available," he said. "Clearly the money's there. They make a political choice. They want to starve the workers and the poor to feed the rich."

Allowing poverty to continue costs the province $8 billion a year while a comprehensive plan to address it would only cost half that much, he said.

An individual on welfare in B.C. receives $610 a month. To calculate the amount of money a person would have for food, Raise the Rates subtracts a single room occupancy rent of $450, a damage deposit of $20 and expenses for personal hygiene and laundry of $10. 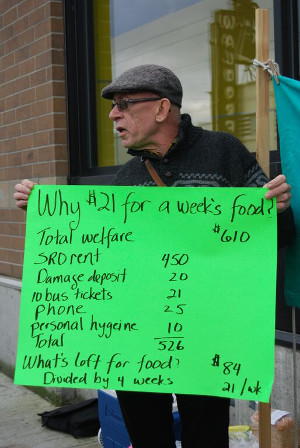 They also subtract $21 for bus tickets and $25 for a cellphone, both of which are included as necessary for someone looking for work. That leaves $84 for food for the month, or $21 a week.

The government announced Thursday that people with disabilities can now hold up to $100,000 in assets without it affecting their benefits. Advocates who had long wanted such an increase welcomed the change from the previous threshold of $5,000.

Hopwood said the change will make "a tiny difference to some people," but fails to address the needs of many people who depend on the government for help. "They're tweaking at the edges and not dealing with the fundamentals," he said.