The New Democratic Party continues to lead in six battleground ridings in British Columbia but faces increasing pressure from the Conservatives whose support is on the rise, a new poll commissioned by the activist group Leadnow suggests. 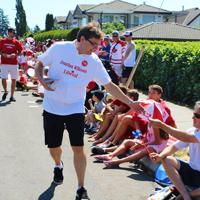 The B.C. results are part of a national poll released Wednesday of 31 swing ridings conducted by Environics Research for Leadnow, which is promoting strategic voting to defeat the ruling Conservatives under Stephen Harper.

An earlier Leadnow poll in August found that the Conservatives had lost a significant amount of their previous support in key B.C. swing seats. But the Tories have seen their support rebound in B.C. and across Canada in recent weeks.

"What we are seeing is that the vast majority of voters want change, but with almost four weeks left in the election the Conservatives could still win because of our broken electoral system and local vote-splitting," said Leadnow's Amara Possian.

"It's really underlining to us that our Vote Together campaign is more important than ever."

But the Leadnow survey finding New Democrats leading in six key B.C. ridings was dismissed by Mike Witherly, a communications official with the Liberals in B.C. "I can't say I am not a little suspicious that this is an exercise in trying to elect New Democrats."

Witherly said that polls in general can be "skewed" by improper weighting of age and gender. He also questioned whether Leadnow is "cherry-picking" ridings -- "and I think they are doing it to give the impression that the New Democrats are the non-Conservative option."

The Leadnow survey, however, gave the Liberals the lead in 15 of the 31 ridings surveyed, with the party enjoying strong backing in Ontario and the Maritimes.

The snapshot of B.C. provided by the Leadnow survey was matched Wednesday by an online survey of decided voters in British Columbia. The Insights West survey found that 34 per cent of decided voters support the NDP, with the Conservatives improving to 28 per cent, followed by the Liberals at 26 per cent and the Green Party with 11 per cent.

Many academics and pollsters have cast doubt on the value of strategic voting campaigns, arguing that most Canadians will choose to vote for their preferred party rather than make a calculated decision. But the Leadnow poll found that six in 10 opposition voters are willing to vote for candidates with the best chance of beating Conservatives, based on local polling results.

The survey found that NDP candidate Finn Donnelly enjoys a six-point lead in Port Moody-Coquitlam over Conservative Tim Laidler -- a sharp drop from the 27-point margin he held in Leadnow's earlier poll in August. Donnelly, now at 41 per cent compared to Laidler's 34 per cent, said that the Leadnow poll proves it's a two-way race in his riding between the NDP and the Conservatives.

"I've been explaining to people who don't want the Conservatives or who are undecided that the way to defeat Stephen Harper in Port Moody-Coquitlam is voting for the NDP."

About the Tory rebound in his riding, Donnelly said: "I've always known it would be a close race between the NDP and the Conservatives."

NDP candidate Mira Oreck continues to lead in Vancouver-Granville with 36 per cent, as she did in the previous poll. But support for Liberal Jody Wilson-Raybould is climbing. The August poll had the Liberal at 24 per cent in third place, but in the latest survey she is at 30 per cent, in a dead heat with Tory candidate Erinn Broshko.

It's a two-race in Pitt Meadows-Maple Ridge with New Democrat Bob D'Eith leading Conservative Mike Murray, 41 to 35 per cent. In North Island-Powell River the NDP's Rachel Blaney has a commanding lead of 41 per cent, compared to the Conservative Laura Smith's 27 per cent. In Nanaimo-Ladysmith, the NDP's Sheila Malcolmson is ahead with 34 per cent of decided voters, compared to Conservative Mark MacDonald and Green candidate Paul Manly with 24 per cent each.

There is a dead heat in Kootenay-Columbia with the NDP's Wayne Stetski challenging the Tory incumbent David Wilks, with each at 37 per cent.

Leadnow commissioned Environics to conduct automated telephone surveys of about 500 to 600 eligible voters in each of 31 ridings across Canada between Sept. 18 and 21. The research was weighted by age and gender. The sample size of the riding polls in B.C. yielded a margin of error of 3.7 to 4.3 percentage points 19 times out of 20, according to Environics.