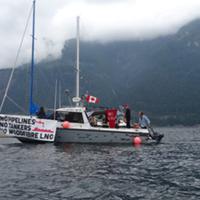 The 180-day process was paused June 30, after the Squamish Nation issued a 25-point ultimatum to address concerns about potential air, land and water pollution and spills at Woodfibre LNG, the proposed $1.7-billion LNG plant and terminal at a former pulp and paper mill near Squamish.

Michelle Carr, assistant deputy minister of Environmental Assessment Operations, wrote Aug. 10 to Byng Giraud, Woodfibre LNG's vice-president of corporate relations, to approve the restart of the process, which came to a halt with 12 days remaining.

"The time limit was suspended on day 168 of the 180-day review period in order to allow the proponent additional time to complete a review of Squamish Nation's proposed conditions and to submit a report to [the government] that fulfills the Section 13 requirements with respect to Squamish Nation's aboriginal interests," Carr wrote, referring to the proponent's required report on public and aboriginal consultation activities.

In a news release, Woodfibre LNG said it has accepted all the Squamish Nation's conditions "and is committed to reaching a formal agreement."

"At the same time, Woodfibre LNG Ltd. also has been working to fulfill the requirements of the provincial and federal environmental assessment processes," said Giraud. "We believe we have now fulfilled these requirements and can restart the environmental review period."

On July 27, Squamish Nation Council decided to postpone a vote on the facility until "sometime this fall" because negotiations continue with Woodfibre LNG, FortisBC and the B.C. government.

Woodfibre LNG opponent Eoin Finn of the group My Sea to Sky said the environmental assessment process has lacked in transparency.

"All of the information that's been submitted since the end of the last public comment period has been seen by the working group in secret," Finn said, referencing the federal, provincial, municipal and First Nations committee struck to advise Environmental Assessment Operations.

Finn also decried the lack of an opportunity for opponents to cross-examine the proponent during the process, as occurred, for example, on the National Energy Board hearings into the Enbridge Northern Gateway pipeline.

Woodfibre LNG proposes to produce 2.1 million tonnes of LNG a year with a 250,000 square-metre storage facility. Natural gas supplier FortisBC, which built a pipeline in 1990 for the Sunshine Coast and Vancouver Island, proposes a 52-kilometre-long gas pipeline from north of the Coquitlam watershed to Squamish that would feed the plant.