On the opening afternoon of the Vancouver Folk Festival, a young woman wearing a purple Leadnow T-shirt approached folkies at the event's main gate and asked them to sign The Pledge. 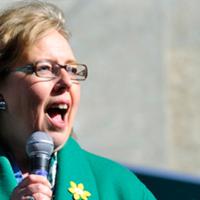 Why Is Elizabeth May Helping Elect Conservatives?

Leadnow, which is modelled on the American liberal-left activist group MoveOn.org, is promoting the idea of strategic voting to defeat the Tories. Leadnow's pledge asks people to vote for the local candidate -- New Democrat, Liberal, even Green -- who has the best chance to defeat the Tory candidate in their riding.

Later that night at Jericho Park, a roar of approval erupted when an emcee suggested that this could be the last Vancouver Folk Festival with Harper as prime minister. About 200 "folkies" signed the Leadnow pledge that late July weekend, joining the approximately 40,000 people who have committed to the group's strategic voting strategy across Canada.

"I do feel that people we talked to at the festival -- traditional NDP'ers and some Liberal supporters -- are willing to consider voting for another party if that candidate could beat the Conservatives," said Tetrault, who was hired by Leadnow to help organize its voting campaign.

The 27-year-old activist said that non-Conservative voters she's met want to "make their vote count" and are frustrated that division on the liberal-left has handed victory to the Tories over the past three elections.

Leadnow has volunteers in about 70 federal ridings where it fears the Conservatives could win with less than 50 per cent of the vote. They have paid-staff running campaigns in 12 battleground ridings, including two new seats in Metro Vancouver -- Vancouver-Granville and Port Moody-Coquitlam.

"We are asking people to be very thoughtful about their vote," said Leadnow executive director Lyndsay Poaps. "Vote with your head, not just your heart."

Under the first-past-the-post electoral system, said Poaps, "if you vote your conscience, the exact opposite of what you want to happen -- can happen. We're trying to prevent that."

In other words, a vote for a NDP, Liberal or Green candidate without a serious shot at victory could hand a riding to the Conservatives even though a strong majority of voters in that seat are opposed to the Tories.

Strategy for a flawed system

Leadnow is politically independent, but operates on the left side of the spectrum. Its current and past campaigns have included opposition to oilsands pipeline expansion, bailouts for large oil companies, Bill C-51 (the Anti-Terrorism Act), and the Conservative government's Fair Elections Act.

Leadnow argues -- as many other anti-Conservative groups do -- that Canada's electoral system is seriously flawed. Prime Minister Harper has been able to impose his right-wing policies on the country despite receiving only 39 per cent of the vote in the last election, and even less in the previous two elections.

"In 2011 a majority of Canadians voted for change, but the non-Conservative vote was split," said Poaps. Sixty per cent of the electorate voted against Harper, she added, but the Tory leader emerged with 100 per cent of the power in Ottawa.

Poaps said that 15,000 British Columbians have signed the strategic voting pledge, with 2,500 of these voters residing in Vancouver-Granville, where New Democrat Mira Oreck and Liberal Jody Wilson-Raybould hope to beat Tory Erinn Broshko. Some Oreck supporters in Leadnow must be hoping that the recent NDP surge nationally is making her, not the Liberal, the change candidate in a mostly upper middle-class riding that does not naturally lean New Democrat.

In past elections it was the Liberal party that promoted strategic voting, arguing that the New Democrats had no hope of forming government. But now the NDP is leading in the national polls and is considered by most analysts as the party most likely to defeat the Harper Conservatives.

"What makes this campaign different than the last three is the fact that we have never had the NDP at such a high level way before the election," said Insights West pollster Mario Canseco. "So the conversation of what an NDP government would look like is happening at an earlier place."

An Aug. 3 election forecast in The Globe and Mail, based on recent polls, projected that the NDP has a 40 per cent chance of winning the most seats while the Liberals have a zero per cent chance.

Canseco said the NDP polling numbers in recent weeks are far ahead of those given to the Liberals in advance of the past two elections when the Liberals were playing the strategic voting card.

The pollster said that the emergence of the NDP as a contender poses a challenge to the Greens. "Will Green supporters rather vote for their Green candidate and get one or two more MPs on the plane to Ottawa with [party leader] Elizabeth May, or would they rather vote for NDP candidates who might be part of a government caucus that could create the environmental regulations they want?"

'We are trying to be helpful'

But how are voters who want a change in government to gauge which candidate has the best shot at knocking off a Tory?

Leadnow acknowledges that predicting the prospects of candidates in campaigns is not an exact science. National poll results aren't always an indicator of what will happen in specific ridings.

"We are going to sweat every decision," said Poaps. "We are not being reckless. We are trying to be helpful."

Leadnow plans to conduct polls in the 12 ridings where it has active campaigns so that voters who want to vote strategically can find out which local candidate has the best shot at victory.

"We aren't saying you should vote for one party," said Poaps. "We are going to take every riding on a riding-by-riding basis."

Leadnow may ask supporters in some ridings whether they want to formally endorse a candidate in the campaign's later stages.

The group is reminding supporters that the opposition parties -- the NDP, the Liberals and Greens -- have pledged to bring about electoral reform if the Conservatives lose power. So this could be the last election, Leadnow argues, where voters would have to mark their ballot strategically rather than choosing their preferred party.

"The electoral system is broken, and we want this to be last election where we vote under these circumstances," said Poaps. "Proportional representation and electoral reform are key priorities. We want to end this system now."

So does B.C.'s Dogwood Initiative, an environmental group that is also pushing for strategic voting in the October election. Dogwood has hired Insights West to conduct polling in eight battleground ridings so that anti-Conservative voters know which candidate has the best chance to beat the Tory.

The group has already released the results of an initial round of polls in these eight ridings and will be conducting two more surveys during the campaign period. The early polling conducted in May found that Conservative support is down in these ridings from the 2011 election, although the undecided vote remains high.

"The most startling fact in our polling," said Dogwood executive-director Will Horter, "was that a significant number of people who voted Conservative last time say they won't vote for them again."

Horter said that antipathy to the Conservatives is stronger in coastal B.C. where the party is "out of touch on issues like oil tankers, climate change and government surveillance."

Dogwood's strategic voting pitch emphasizes pragmatism. "We believe that people should always make choices based on real-world politics," said Horter. "Our supporters are looking for the candidate who best represents their values and for who has the chance of winning in the election."

Horter said his group will help the 300,000 supporters in its database make educated voting choices but won't give specific candidates its official blessing. "We are unlikely to be endorsing anybody. We have never endorsed anybody historically. Most people don't take too kindly to being told how to vote. Voting is a personal exercise."

Dogwood says that it has 2,800 volunteers in B.C. ridings that will be canvassing, trying to drive up voter participation around issues such as oil tankers and pipelines, plus government surveillance.

The rise of the NDP to the top of national polls in recent months means that many races, especially in urban ridings, could be tight three-way contests without the clarity many strategic voters might want.

Polling by Insights West for Dogwood, for instance, indicates that the three main parties are competitive in the two North Shore seats. So at this point, it's not evident which opposition candidate is best positioned to knock off Conservative incumbents in the seats of West Vancouver and North Vancouver.

"You could have Conservative victories where the Tory candidate gets 32 per cent of the vote because of the splits," said Insights West's Canseco.

But Dogwood's Horter believes most three-way races will become two-way races in the final weeks of the campaign. "My guess is that things are going to differentiate themselves as we get close to the election. Polls will indicate who are the front-runners.

"  Recent polling shows there is potential for cross-over between NDP and Liberal supporters. A poll released this week by Nanos Research found that 40 per cent of voters leaning NDP have the Liberals as their second choice with only 12 per cent seeing the Conservatives as an alternative. Among Liberal supporters, 45 per cent have the NDP as their second choice with 29 per cent prepared to choose the Tories as their next option.

But many NDP supporters oppose strategic voting, arguing that the Liberals typically campaign from the left but then govern from the right. Paul Moist, the national president of the Canadian Union of Public Employees, has rebuked Leadnow in a letter for trying to elect "so-called progressive candidates who can defeat the conservatives."

"There are not large numbers of independent 'progressive' candidates out there unaligned with their party's policies. Neither the Liberal Party of Canada nor the Green Party are progressive. Both parties have very right-wing economic policies, do not stand for working families, or public services. Only the NDP has a progressive platform."

But other labour leaders are endorsing strategic voting, including Jerry Dias, national president of the 300,000-member Unifor. Dias has urged Unifor members to vote for the local candidate -- NDP or Liberal -- best positioned to beat the Conservatives.

Dias said that another Harper government would be disastrous for Canadian workers. "So, that in itself trumps going out there and putting support in a riding where we know that the New Democrats have no chance."