The Supreme Court of Canada said today that it will hear the landmark case of Jessica Ernst, which squarely challenges how the Alberta government has treated landowners and regulated hydraulic fracturing. 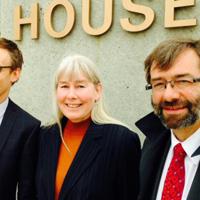 The decision both stunned and exhilarated the 57-year-old Ernst.

"I've always known my case was important for water and all Canadians, that's why I am taking this legal stand," said Ernst who lives in Rosebud, Alberta.

"The court will now hear my appeal that provincial energy regulators not be legally immune from violating the Canadian Charter of Rights and Freedoms when trying to intimidate citizens harmed by fracking," added Ernst. Her stand against the industry and the Alberta government has made her a folk hero throughout North America and parts of Europe.

However, a win at the Supreme Court does not mean that she will win her lawsuit, explained Ernst to the Tyee. "It means I would be sent back to the lower court in Alberta to begin my lawsuit against the Alberta Energy Regulator. It means still a very long, hard, expensive journey."

The Supreme Court only hears about four per cent of all civil Charter claims brought to its doorstep.

Eight years ago, oil patch consultant Ernst sued Alberta Environment, the Energy Resources Conservation Board (ERCB) and Encana, one of Canada's largest unconventional gas drillers, over the contamination of her well water with hydrocarbons and the failure of government authorities to properly investigate the fouling of groundwater.

The $33-million lawsuit alleges that Encana negligently fractured into fresh water zones more than a decade ago; that the ERCB breached Ernst's freedoms under the Charter of Rights and Freedoms; and that Alberta Environment performed a problem-plagued investigation in bad faith.

After the Alberta Court of Appeal ruled last year that Ernst could not sue the province's energy regulator (the lawsuit against Encana and Alberta Environment is slowly proceeding) because of a protective immunity clause, her lawyers asked the Supreme Court to consider reviewing the matter on constitutional grounds.

Ernst's case raises a number of critical national issues that involve the Canada's Charter of Rights and Freedoms.

The basic question the Supreme Court must now consider boils down to this: Can a provincial law allow a powerful energy regulator to violate the nation's Charter of Rights and Freedoms by banishing citizens and falsely branding them as a security threats?

On its website the Supreme Court has summarized Ernst's case succinctly.

Between November 2005 and March 2007, Ernst alleges that the ERCB (now known as the Alberta Energy Regulator) refused "to accept further communications from her through the usual channels for public communication until she agreed to raise her concerns only with the Board and not publicly through the media or through communications with other citizens," said a court summary.

As a result, Ernst alleges that the energy regulator infringed her "Charter rights both by restricting her communication with it and by using those restrictions to punish her for past public criticisms and prevent her making future public criticisms of the respondent."

The Supreme Court decision to hear the case means there will be a hearing on the matter over the next six months and that citizens and other parties can intervene and introduce arguments on the matter at hand.

If Ernst is successful at the Supreme Court, the oil patch consultant will be able to reintroduce the energy regulator back into her celebrated lawsuit and it will have to file a statement of defence.

Ernst regards the energy regulator as the guilty party in the lawsuit as well as the institution with the most data on the impacts of hydraulic fracturing on groundwater.

The case has the potential to bring to a national stage the rights of landowners affected by fracking. Study after study has shown that industry cannot always control how the injection of fluids or gases will fracture already cracked and pressurized rocks underground. As a result, the technology has gone out of the targeted zone and connected into freshwater aquifers and other oil and gas wells. It has also caused methane to stray into paths of least resistance and rise to surface.

The highly controversial technology, which has rattled thousands of landowners and spawned hundreds of lawsuits, has also triggered felt earthquakes in Alberta, Colorado, British Columbia, Texas, Ohio, and Oklahoma.