Julie Van de Valk is just the type of young person that Canada's major progressive political parties want to attract. There's just one problem: she's not impressed by any of them. Van de Valk, 20, is a third-year geological engineering student at the University of British Columbia. In her spare time she helps run a campaign to divest the school's endowment from oil and gas companies. Climate change is so urgent that "it's not something we can wait another day to address," she told The Tyee. 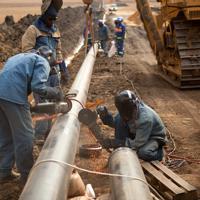 Van de Valk does not fit the prevailing stereotype of Millennials: lazy, apathetic and uninformed. She's so passionate about global warming she spent a recent Saturday knocking on doors in Vancouver as part of a Storm the Riding campaign to raise awareness of climate solutions. But Van de Valk refrained that day from endorsing a specific political party. None of them, in her opinion, "are addressing climate change with the type of leadership that people who understand the issue want to see."

Millennials like Van de Valk have become the largest demographic in North America. Study after study suggests 18 to 34-year-olds are more progressive than members of older generations on many issues -- including climate change. Yet they're the least engaged with the current political system. Less than 40 per cent of young people cast a ballot in Canada's 2011 federal election. If 60 per cent had voted, pollster Nik Nanos has calculated, Stephen Harper likely wouldn't have won a majority government.

The implications go further. "The decline of voting in the 21st century may become as striking a phenomenon as the decline of church attendance in the latter part of the 20th," read a recent Globe and Mail op-ed. Van de Valk plans to vote in the 2015 federal election. But she's uninspired by her options. "People of my generation, we want to see a politician commit 100 per cent to a brighter future," she said. "I will not be out knocking for a political party until there's one [whose vision] I can buy into."

Van de Valk grew up in Waterloo, Ontario. All throughout high school she was "keen on environmental sustainability," she said. After moving west for university, she began working with UBCC 350, an offshoot of the global climate change network 350.org. Van de Valk liked that the group's ultimate goal of limiting global warming to safe levels was paired with tangible short-term actions -- like pressuring UBC to divest from oil and gas firms. "The theory of change made sense to me," she said.

Her convictions grew stronger last March, when a group of 70 academics released a report arguing that it's feasible for Canada to make a full transition to clean energy by 2035. "It isn't out of reach," she said. Many other members of Van de Valk's generation feel the same. A Strategic Communications poll from last year suggested that 42 per cent of Millennials in B.C. "strongly agree" the province can both grow the economy and fix the climate, as opposed to 32 per cent of people over age 55.

That finding is supported by a survey of Millennials just released by the Broadbent Institute. About 56 per cent of young Canadians think the environment should be prioritized over jobs, it suggested, compared to 46 per cent of people above age 35. Millennials also voiced strong support for socially liberal governments that increase spending on education and health care. "More young voters support elements of a progressive political agenda than older voters," a report on the polling data read.

Its author wasn't surprised to see a generation gap in political attitudes. What truly struck University of Saskatchewan political studies professor David McGrane was how uniform Millennial respondents were in their thinking. "Youth, no matter where they lived were to the [political] left of the national average," he told The Tyee. Yet this generation is also the least likely to make its voice heard during elections. Why? "We've been having trouble finding an answer to that question," McGrane said.

So has pollster Nik Nanos. Last year, he worked with former parliamentary budget officer Kevin Page to guess what the outcome of Canada's 2011 election might have been if more youth had actually voted. A 20 per cent increase in Millennial turnout could have prevented Harper from winning a majority, they calculated. It might also have broadened the political conversation. "What we find is that [young people's] concerns are much more diverse than older Canadians," Nanos told CBC last year.

But instead of that happening, only 38 per cent of people below age 30 bothered to cast a ballot, compared to 60 per cent of the broader population. Elections Canada later commissioned a study to better understand why youth turnout was so low. "[Millennials] were generally less interested in politics, less likely to view voting as a civic duty, and more likely to feel that all political parties were the same and that no party spoke to issues relevant to youth," its National Youth Survey concluded.

This isn't unique to Canada. A major survey last year from the Pew Research Center suggested 50 per cent of U.S. Millennials see themselves as "political independents." Under 40 per cent of older respondents felt the same. By and large, Boomers grew up in an era when personal identity was more closely associated with specific political parties. "I don't feel that connection," Van de Valk said. "In my lifetime I've never really seen leadership in any party that extends past the four year election cycle."

Canada's 2015 election is no exception, she said. At least, not when it comes to climate change. Harper's Conservatives have warned climate action could be "job-killing." But the Liberals and NDP haven't offered Van de Valk a very inspiring alternative. Neither party has clearly articulated to her how it would drastically reduce carbon emissions and shift Canada to clean energy. Meanwhile, both have offered qualified support to the oilsands. "That doesn't do it for me," she said.

Canada, after all, is set to miss its 2020 climate target by 20 per cent. Van de Valk knows Millennials like her will inherit the consequences of today's inaction. She also knows decisive climate policies have been implemented in places like China and Europe -- and that they're possible in Canada. What she craves is bold leadership. She doesn't care which political party shows it. "It is a huge fault of our democratic system that we look at climate change from a partisan perspective," she argued.

Her statement could apply to a broad range of gridlocked issues. Inequality, criminal justice, poverty -- the list goes on. "One reason young people are so disengaged from politics is they grew up in a system that can't seem to work," said Sam Gilman, CEO and co-founder of Common Sense Action, a Millennial think-tank and advocacy group with chapters on 40 college campuses across the U.S. Its logic is simple: make politics about solutions instead of partisanship, and more young people will engage.

"Our generation is different from previous generations in the sense that we care about collaborating," Gilman said. Common Sense Action is explicitly bipartisan. It recently merged with another Millennial group called Run for America in the hopes of electing a new generation of solutions-focused Democrats and Republicans in the 2016 House of Representatives election. "There aren't leaders stepping across the aisle to advance solutions to problems we face in our communities," Gilman said.

He has a long way to go. Youth turnout was just 20 per cent in the recent U.S. midterm elections, while polarization in Congress is at all time highs. Nothing similar to Common Sense Action's bipartisan election effort exists in Canada, where the gulf between left and right is rapidly growing. But if it did, Van de Valk is a likely supporter -- especially on the issue dearest to her. "We want to move away from the idea that climate change is associated with a specific party," she said. "Really it's something that all Canadians care about."