Sharan Burrow cares deeply about the future of our planet. As general secretary of the International Trade Union Confederation, which represents over 176 million workers in 162 countries, she also cares deeply about employment. But she sees no reason that global efforts to stabilize climate change and make our civilization truly sustainable will put people out of work. In fact, Burrow said that green investments in just 12 countries could create 48 million new high-paying jobs. 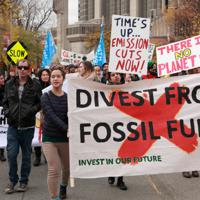 Which helps explain why Burrow is "optimistic about the future." But her optimism comes with an important caveat: we can only save the planet and grow the economy if business and political leaders take action now. As a director with the Asset Owners Disclosure Project, Burrow said the same imperative applies to the world's 1,000 largest pension funds, which together manage over $75 trillion in assets, but invest less than five per cent of their wealth in the green economy.

Burrow is sure to address such issues Thursday evening when she speaks at a public forum in Vancouver on the role business, trade unions, cities and pension funds can and should play in addressing climate change; and during her Friday keynote speech at SHARE's annual B.C. Pension Forum. Until then, keep reading The Tyee's exclusive interview with Burrow to learn why one of the world's most influential labour leaders thinks economic growth and ecological protection go hand in hand. Her responses have been edited for clarity and length.

On why labour unions should care deeply about climate change:

"It's very simple for workers: there are no jobs on a dead planet. When you consider that we're already seeing the loss of jobs and livelihoods and people's land with the changing of climate and extreme weather events, we know that if we are indeed to stabilize the planet and see a sustainable future, there must be action. We'll see broad-spectrum impacts if we don't take steps now to decarbonize our economy."

On the enormous amount of jobs created by climate action:

"There are jobs in the green economy. There's no doubt about that. We did our own study in 2010. If you put two per cent of GDP into investments in the green economy over five years, then in just the 12 countries that we studied there are 48 million new jobs -- good jobs. We have to spend something like $60 trillion by 2030 and $90 trillion by 2060. If we promote sustainable [industries] or employ more people in the context of cleaner energy, then there are millions and millions of jobs in that equation. We're optimistic about the future, provided the planning is done today."

On how to ensure this shift doesn't leave fossil fuel workers behind:

"With workers that are vulnerable [to climate action], we have to signify their contribution [to society]. If you're a worker in coal or fossil fuels, you have actually contributed to the wealth of our economy and that must be recognized and valued.

"We have to make sure that the transition to a low carbon future is 'just.' We need supports for workers. We have to look after them in terms of new skills they might need for new technologies, and we have to have supports where communities need to be reinvented. We've negotiated at U.N. conferences for many years prior to Copenhagen -- so at least a decade now -- on the concept of 'just transition' measures. Those will be in the [climate] agreement we hope to see in Paris this year."

On why workers deserve to know how their pensions are invested:

"The Asset Owners Disclosure Project is very simple. It asks pension funds to disclose where they invest workers' money. It is shifting, but the opposition to disclosure has been extraordinary. In the last three years, you've seen some areas of green economy investment grow exponentially, but overall that investment is still less than five per cent [of overall pension fund portfolios]. At that level, you're not going to see the [investment] confidence that will drive the rest of the market."

On why investors urgently need a more long-term sustainable vision:

"We've seen an era where speculative capital nearly brought the global economy to its knees. And of course the global financial crisis of 2008-09 is still with us in terms of incredibly high unemployment and inequality. In that context, we want to make sure investments are working for working people, and that they're not contributing to the speculative environment that is not helpful for workers or their jobs.