The Conservative government likes to boast that it has created 1.2 million jobs in the past seven years, an impressive figure on the face of it. 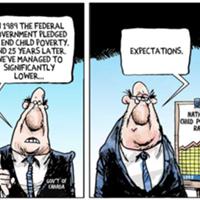 Can the NDP Challenge Harper on the Economy?

But take away some selective figuring by the government and those jobs represent about half of what Canada needs right now, an economist says.

The main problem with the job creation boast, Stanford argued, is that the Conservatives open the argument using 2008 -- the year the financial crisis hit -- as the base year.

In that year, 400,000 jobs were lost, but Stanford said those jobs returned in the subsequent recovery -- not as a result of a job creation plan. Using that argument, the 400,000 job gains should be removed from the 1.2 million jobs figure the Conservatives cite, he said.

Stanford said years of government austerity plus the hoarding of money by large corporations -- even in spite of low corporate taxes -- has made the economy stagnate.

"At any given point in time, the economy has four big drivers, consumers, businesses, foreigners through our exports and government," Stanford said. "Those are the four major engines of the economy and right now none of them are really in gear."

On the job creation argument, Stanford said Canada has only gained 780,000 jobs if gains are measured from 2009 and exclude the 400,000 jobs that figure into the Conservative equation.

"The more meaningful comparison would be to say 'where were we before the recession hit?'" he said. "In that regard we've fallen way, way behind population growth."

Right now, about 308,000 jobs per year have to be created to keep up with population demand, he said. That means the country actually needed 1.55 million jobs created from 2009-2014 to keep up.

The department's Marie-Pier Desaulniers said that "other" category represents about two per cent of Canada's overall employment figures. Pinpointing firm numbers on how many temporary foreign workers are in Canada is difficult because Statistics Canada doesn't ask a worker's status.

"The Labour Force Survey is a household survey," Desaulniers wrote in an email. "It is possible that some temporary foreign workers do not live in private households, but instead collective dwellings (for example hotels, motels), and therefore might not be included in the survey."

In 2011, the last census, 191,000 temporary foreign workers re-entered or entered Canada, according to a paper prepared by Melissa Pang in the Library of Parliament's Social Affairs Department. That brought the total number of temporary workers from abroad to 447,000.

Stanford said the unemployment rate is a poor indicator of the state of jobs in the country because it only counts those looking for work, meaning unemployed people who have given up their job search aren't included.

"Our labour market is as weak as it was in the worst days of the recession," he said.

He said the government's habit of comparing Canada's job growth to other countries is also misleading because Canada's population is growing at a faster rate than in some European and Asian countries, for example.

Stanford said Canada has been relying too much on the housing market and debt for Canada's economic prosperity. Too many Canadians are propping up the economy through purchases and relying on credit to get the money.

Diana Petramala, an economist specializing in real estate at Toronto-Dominion Bank, said housing and its spin offs do contribute to about half of the Canadian economy, but that is expected to slow over the next five years.

"We're going to see a slowdown in the pace of construction, the pace of home buying, so housing is going to contribute less to economic growth going forward," Petramala said. "We can't count on housing forever but the good news is on the other side of the coin we do expect other areas of the economy to start picking up now."

She said the hope is the lower Canadian dollar will bring some manufacturing back to Ontario, which has lost hundreds of thousands of jobs in the sector in recent years.

While unemployment in former manufacturing hubs in southwestern Ontario, such as Windsor, has hit more than nine per cent, other areas have had luck diversifying their economies.

London, for example, has managed to "significantly" improve its employment situation, bringing the unemployment rate from more than nine per cent in 2009 to 7.5 per cent at the end of last year.

Kapil Lakhotia, president and CEO of the London Economic Development Corp., said that was done by diversifying to higher tech manufacturing as well as the food and beverage industry.

"London was fortunate to be able to attract (food producer) Dr. Oetker from Germany, to build frozen pizzas in London," Lakhotia said, giving one example. "This is their first North American frozen pizza plant, so a very sizable investment in London."

Petramala said if a resurgence in southwestern Ontario does happen it could also lead to a slowdown in the Toronto housing market as more people leave to seek work in places like London and Kitchener.