A breach in the Mount Polley mine tailings pond dam was caused by a design flaw, an independent panel of engineers reported Friday. 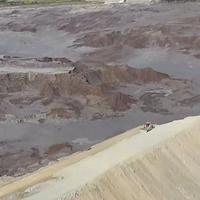 Using a layer of material in the dam foundation that was weaker than thought was the equivalent of a "loaded gun," said Norbert Morgenstern, the chair of the three-person Mount Polley Independent Expert Engineering Investigation and Review Panel.

"Building with the steep slope... pulled the trigger," he said. "The two things together constitute the root cause of the failure."

The dam at the copper and gold mine near Williams Lake, British Columbia was originally built in 1997 and had been added to over the years. In August 2014, a breach in a perimeter dam on the north side of the tailings pond spilled millions of cubic metres of toxic tailings and waste water into Polley Lake and Quesnel Lake.

"The panel recognizes we can't continue business as usual," said Steven Vick, a geotechnical engineer on the panel. "No failures are acceptable under the task we've been given... We can't continue to use technology that's 100 years old."

Vick said that mine planning decisions tend to be based on economics before safety is even considered. "We want to reverse that," he said.

The recommendations about governance and oversight were made despite the panel's conclusion that they were not the main factors in the Mount Polley breach. "Additional inspectors at the tailings storage facility would not have prevented the failure," Morgenstern said. "There was nothing to see."

Nor was it the panel's job to make conclusions or recommendations about the criminal or civil liability of any person or organization, Morgenstern said.

"The dominant contribution to the failure resides in the design," he said. "The design did not take into account the complexity of the sub-glacial and pre-glacial geological environment associated with the perimeter embankment foundation... We concluded the evidence indicates the breach was the result of a failure in the foundation embankment because of the presence of what was a glacial lake deposit."

"I am relieved we have a cause," said B.C. Energy and Mines Minister Bill Bennett. "The failure is much more complex and a lot more difficult to talk about than we perhaps initially thought."

He said he was glad the report confirmed the breach could not have been prevented by government employees doing surface inspections. "This was an unpredictable disastrous event that we must do everything we can to ensure doesn't happen again."

Bennett said the government would consider making dam safety guidelines from the Canadian Dam Association mandatory in B.C., but will consult with industry first. The government is also requiring mining companies to confirm by letter that their dams don't have the same kind of design flaw as the one at Mount Polley, he said.

Bennett also stressed there are still reports to come from the chief inspector of mines and from the conservation officer service. "Those two reports will go further in terms of identifying those who were responsible for any mistakes that were made," he said.

There is local pressure to re-open Mount Polley mine, Bennett said. "We are going to take the time that's necessary to review the application we have from the company." Allowing use of the tailings pond that breached won't be considered until the two outstanding reports are received, he said.

Scott McCannell is the executive director of the Professional Employees Association, which represents some 1,150 B.C. government employees who hold professional organization licenses. He said there are systemic issues that are contributing to risk in the mining industry, including the government's decisions to reduce the size of the civil service and contract out for professional advice.

"Government has simply reduced itself to the point where there's not the internal expertise to manage risk," he said. "It's really in essence a self-regulation model."

"It's good the expert panel is saying we must now move to 21st century technology," said Calvin Sandborn, the legal director of the Environmental Law Centre at the University of Victoria. "It's important to get our provincial mining policy right to prevent these kinds of things in the future."

Sandborn also pointed out the need for stronger whistleblower protection so that employees can provide evidence without worrying about their jobs. "We're aware of some whistleblowers who didn't give evidence to the panel," he said. "If you don't protect whistleblowers, you're not going to get the full story."

The panel's report showed the Mount Polley environmental disaster was avoidable, said NDP leader John Horgan in a press release. "It exposed a system that failed to identify and mitigate the risk of allowing the dam to be expanded repeatedly without ever revisiting whether the foundation could handle it."

The government has a lot of work to do to rebuild confidence in mining in the province, he said. That includes ensuring the mines ministry has the expertise needed to review and evaluate mine and dam safety, he said.