Environment Canada lacks the resources to keep critical weather monitoring stations up and running throughout the year off the B.C. central coast, putting commercial and recreational mariners at risk as they enter one of the B.C. coast's most dangerous stretches of open water. 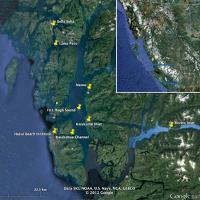 At least two weather tracking buoys were out of service as of Friday, and had been for months, according to Environment Canada.

Queen Charlotte Sound (see map lower down) is the largest unprotected run of coastal water between the B.C.-Washington border and Alaska. Without islands to brace the impact, it bears the full brunt of the North Pacific in winter. Hurricane-force winds can rip the coast with gusts over 80 knots, whipping up swells higher than a four-storey building.

George Burroughs is arguably the most frequent commercial user of these waters year-round, running a Port Hardy-based water taxi service for industry, tourists and local residents along the central coast. With gales scouring the Sound every week in winter, he's a little jumpy at the best of times, but this year is worse: the Environment Canada weather station he needs to keep safe has been dead since May.

The station is called West Sea Otter, one of at least 11 floating offshore weather stations maintained by Environment Canada (with help from Fisheries Oceans Canada) to measure and transmit current weather and ocean conditions. This includes wind speed, wave height and barometric pressure.

Burroughs, who noticed West Sea Otter was out shortly after it died last spring, says such floating installations function as a distant early warning system for mariners confronting the unpredictable weather of the Sound.

"We can see hurricane-force winds twice a month here during winter," says Burroughs, who has historically based his decision to risk a Sound crossing on information transmitted by West Sea Otter. "Without that buoy, it's like flipping a coin."

'I don't have good news'

After a month of receiving dead air from West Sea Otter, Burroughs contacted Environment Canada. "This is an important weather buoy for us working in the Queen Charlotte Strait area," he wrote in a June email. "Do you have any idea when it will be fixed?"

"Unfortunately, I don't have good news for you," responded Environment Canada spokesman Sylvain Boutot the following day. He confirmed the buoy had stopped working for "unknown reasons," necessitating a visit by ship to investigate "... in order to do this, we have to use a Canadian Coast Guard vessel equipped to retrieve the buoy and it appears that such a vessel won't be available for a while," wrote Boutot. "We don't have an estimate as to when we'll be able to repair the buoy, but it could be out for an extended period."

Nearly seven months later, winter storm season is well underway, and West Sea Otter remains out of order, though Environment Canada now says a fix is in the works, possibly as early as this weekend.

In response to repeated Tyee inquiries about the buoys, Environment Canada's Mélanie Quesnel sent an email on November 28. She did not explain why it took more than six months to address the issue, other than to say Environment Canada relies on Canadian Coast Guard (CCG) vessels to access the buoys and that ''the CCG has been unable to make this voyage to date.'' Quesnel also confirmed that another weather station buoy -- the South Nomad buoy which is roughly parallel to West Sea Otter but much farther out to sea -- is also currently not working -- and will not be fixed until at least May 2015.

Why West Sea Otter is important

Mariners attempting to cross Queen Charlotte Sound have a number of weather resources to tap: weather forecasts are accessible by VHF (very high frequency radio) every six hours, and from a network of manned lighthouses every three hours. Weather buoys and automated land stations update real time conditions every hour.

But with West Sea Otter out, there is currently a giant information hole in the middle of the Sound, and the closest weather buoy is roughly 80 km away. When it works, West Sea Otter enables commercial and recreational boaters to determine if current weather conditions in the Sound are about to get worse. (If the barometric pressure reported by West Sea Otter is dropping, the weather is deteriorating.) It also reports wave height and frequency -- huge swells that are 16 seconds apart might be OK, but if they are just seven seconds apart, the conditions are dangerous, depending on the size of your boat.

"The ocean buoy is a real decision maker," says Eric Peterson, whose Hakai Institute research and teaching centre is located on remote Calvert Island, just north of Rivers Inlet. A frequent customer of Burroughs, Peterson and his staff frequently make the four-hour, one-way trip from Port Hardy to Hakai, either in an 11-metre boat of their own, or Burroughs' 10-metre water taxi. "When the buoy was there, we would never think to make a crossing without consulting it. Now we say, 'I think it will be OK,' and just go."

While Hakai Institute operates its own free web cams and other monitoring devices along parts of the Central Coast, which some aviators and sailors use to track conditions, that privately funded network can't replace the service provided by the Environment Canada buoys, Burroughs said.

Bigger ships are less dependent on the West Sea Otter buoy. A spokesperson for BC Ferries, which crosses Queen Charlotte Sound as a routine part of its Inside Passage service, said their captains have been aware that West Sea Otter is out, but that the data is "not critical to our operation."

The shipping lanes along the B.C. Coast provide an important life-line between Alaska and the lower 48 -- a marine highway connecting Seattle to the Panhandle. A multitude of towing/tug companies do regular trips between Seattle and Alaska, including Seattle-based Brusco Tug & Barge, whose captains all know the Environment Canada weather buoys by name.

"West Sea Otter is important if weather is up and the choice is to continue or hold up [on northern Vancouver Island] to wait weather out," Brusco's Port Captain Joe Bromley told The Tyee. 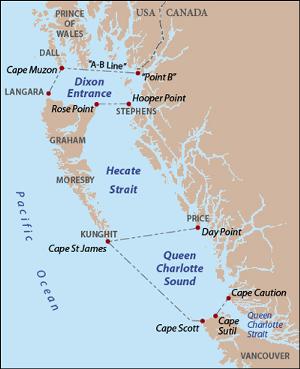 Where weather info can save lives: Sailors crossing Queen Charlotte Sound along BC's Central Coast can face winds over 80 knots, swells higher than a four-storey building.

Dale Jensen, Port Captain for the Alaska Marine Highway System (a state-run ferry system connecting Alaska to the lower 48), says their ships regularly check West Sea Otter and other buoys on their voyages, but it's not always important. "We don't feel the lack of this buoy affects safety unless the conditions were very severe," he says, noting their large vessels can handle extremes of weather.

He adds that Canada is not alone in having to deal with inoperable weather stations -- a single weather buoy in Alaska waters has been out of order since last December.

Roland Stull is a man who makes a living forecasting weather and he's not surprised the offshore weather stations are not always working. "They're in such nasty conditions out there with all the storms," says Stull, a professor with the Department of Earth, Ocean and Atmospheric Sciences at UBC in Vancouver. "It's so expensive to go out and maintain them."

Buoys like West Sea Otter are huge structures, he says, located in water more than 220 metres deep, requiring massive chains anchored by concrete. Large, ocean-going ships must be manned and sent out to maintain the sensitive instruments and remove debris and barnacles.

Stull uses the buoy information as a starting point for creating weather forecasts, which his group at UBC generate for paying clients, including the B.C. government and many different private sector companies. Weather conditions from the buoys are fed into computers where "change equations" are applied to extrapolate how the current conditions will evolve in the hours and days ahead. "The more stations that are out, the more fuzzy my understanding of the weather is, and the poorer the forecast will be over British Columbia."

He would like to see more buoy weather stations in the future, extending the present coverage further from the coast, which would improve both the skill of weather forecasts over the ocean and downwind over Canada. "More funding is appropriate," he says.

More funding is a tall order in the current era of budgetary restraint at Environment Canada. As The Tyee reported in March, Environment Canada weather services will be slashed about 18 percent between now and 2016/17. Funding for "reliable, accurate and timely forecasts and warnings" will drop from $166 million to about $143 million in 2017.

These cuts are coming at a time when the federal government and industry is relying on world-class marine safety to sell a plan to export Alberta oil sands bitumen to Asia via tankers plying the B.C. coast.

When the Tyee last talked to George Burroughs in late November, he was crossing Queen Charlotte Sound, returning home to Port Hardy from an overnight trip to supply a logging camp north of Rivers Inlet. Gale winds had blasted the night before, forcing him to take shelter overnight at a marina near Bella Bella. It was a trip he made without West Sea Otter -- which as of November 28, remains dead to the world.

When he got home, he wrote to Environment Canada again. "Winter is here. For me to guess the sea state, wind speed, direction and barometric tendencies is not a safe option before crossing the eastern portion of Queen Charlotte Sound," he wrote.

On Friday, Nov. 28, Environment Canada spokesman Boutot said a plan to fix West Sea Otter before the end of November was in the works. There was just one problem: "the weather is not cooperating (too much wind)."

[Editor's note: The Tyee first contacted Environment Canada on Wednesday, Nov. 25, seeking confirmation that the agency knew that two important weather buoys were out of order, and to find out whether a plan existed to fix them. At 12 p.m. on Sunday, Nov. 30, the West Sea Otter weather buoy came back to life (see the moment below!) -- transmitting the first weather information in almost seven months. Environment Canada later confirmed that the other weather buoy, South Nomad, will not be fixed until at least May 2015.]