At a downtown Vancouver hotel on Thursday, three men in business suits were about to place their signatures on a liquefied natural gas deal laying out benefits to each party. 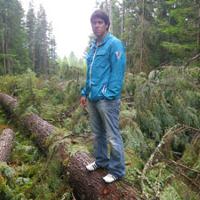 But before they could wrap up the ceremony, a lone Nisga'a man wearing a red and black button blanket adorned with a crest walked to the front of the room.

"You have not come to our community," Barton said. "This is a celebration? Turn around, where are the Nisga'a? We have people over here to say we do not consent to this."

Hotel staff asked Barton and three other protesters to leave the room, and the event finished before an audience of about 50 invited guests, none of them wearing button blankets or holding protest signs.

Stevens later said that Nisga'a citizens live in a democracy and are free to express their opinions. "But I have no comment about what happened today."

The incident marks growing discontent among Nisga'a citizens over the alliance struck by their nation's government with Pacific Northwest LNG and TransCanada's PRGT project. Nisga'a are using Facebook to organize protests (one tomorrow in Vancouver) and circulate a petition against the deal.

The arrangement they reject could bring 200-300 jobs to the Nass Valley, where the unemployment rate hovers at 36 per cent; and fetch property tax, profit sharing and right of way payments, critical revenue for a nation whose last treaty transfer payment was paid last May.

The Nisga'a could also benefit indirectly from camp contracting, as well as security and medical services, Stevens said.

As well, a planned domestic distribution of gas from the pipeline stands to benefit Nass Valley homeowners, whose heating bills average $300 per month, he said.

Nisga'a critics say the pipeline project compromises cultural values, a sacred burial ground and the democratic rights of the people it's supposed to benefit.

"I felt betrayed. I can't believe that our ancestors are going to be disrespected for monetary gain... short-term gain that we don't know anything about," Vancouver Nisga'a citizen Ginger Gosnell-Myers told The Tyee.

"We're giving up our sacred lava beds, our burial grounds, for a pipeline that nobody wants and nobody was consulted on," she said.

The Nisga'a treaty with the federal and provincial governments has been in effect for 14 years. The Maa-nulth and Tsawwassen are the only other tribal groups with treaties.

If the project negotiated between the Nisga'a government and Pacific Northwest LNG comes to fruition, TransCanada's pipeline would transport liquefied natural gas from northeastern British Columbia to an export terminal planned for Lelu Island.

The initiative is one of 17 LNG proposals jockeying for position in a B.C. market crowded with contenders but none close to the building stage. 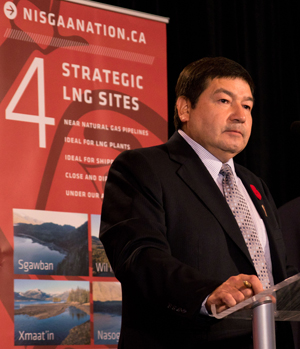 Nisga'a Lisims president Mitchell Stevens says there has been adequate public consultation about the pipeline with his nation's citizens. Photo by Wawmeesh G. Hamilton.

Despite this, Nisga'a are now canvassing for a corporate partner to help them establish an LNG processing facility in the Nass Valley, Stevens said. The Nisga'a nation "has become an active player in the LNG industry in B.C.," he said. "The Nisga'a nation is now, and always has been, open for business."

Outside of the room where the document signing ceremony was being held on Thursday, protester Chemnko Woods said he hadn't been told about the event by Nisga'a leaders, and that's the problem. "We are not against our leaders. We are with them," he said. "We had a consultation meeting a year ago, they said they would have followup meetings. They did not give us followup meetings."

Another protester, Melanie Woods, noted that tribal government and company officials were present for the signing but Nisga'a people weren't invited. She said concerned nation members like her were treated as "an afterthought."

In fact, on Wednesday, the night before the signing ceremony, Stevens and other Nisga'a government officials held an information meeting with Nisga'a citizens living on the Lower Mainland. More than 1,500 Nisga'a live in Vancouver.

Nisga'a officials declined this reporter's request to observe the meeting.

Sources there told The Tyee that more than 75 Vancouver Nisga'a attended the session held at the Vancouver Indian Centre.

"The purpose of the meeting was to inform Nisga'a citizens about the decision that was made by the Nisga'a nation to enter into an agreement with TransCanada PRGT," Stevens said afterward.

Officials explained the project for an hour and 45 minutes of the two-hour meeting, and entertained only three questions. Officials did not tell members about the benefit agreement signing the next day, sources told The Tyee.

Stevens denied that not enough information about the project has been made available to Nisga'a citizens.

Nisga'a officials have discussed the project for two-and-a-half years, and the issue was also discussed at a special assembly in May, he said. 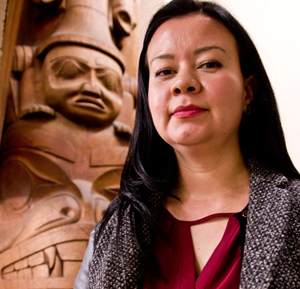 Vancouver Nisga'a Ginger Gosnell-Myers thinks that Nisga'a people have gone from being wards of Canada to being wards of the Nisga'a Lisims government. Photo: Wawmeesh G. Hamilton.

Each Nisga'a local, including Vancouver, has representatives on the government executive. "It's their job to disseminate information to their local," he said.

The support of the Nisga'a is critical to the project, said PRGT president Dean Patry. "You have our commitment that as we bring our project to your community we'll ensure that the Nisga'a continue to have a strong voice as it unfolds," he said.

The pipeline will run through Nisga'a provincial park which is home to lava beds that have particular spiritual significance to Nisga'a. The encrusted lava is the final resting place for thousands of Nisga'a who died after a volcano erupted several hundred years ago, Gosnell-Myers said. "It's a burial ground. I call it a mass grave," she said. "They are sacred and (we're) not to touch a rock to remove them."

Stevens said that the pipeline route doesn't pass through graves in the park.

Project officials examined two other routes but chose this one based on an environmental assessment and consultation with Nisga'a elders. "This is the less intrusive of the other ones. It stays away from the original two villages," he said.

An official from the B.C. Ministry of Environment said the one known archaeological site near the pipeline will not be affected.

However, such a project would violate the B.C. Park Act; therefore, it can't be authorized unless the land it crosses is taken out of the park.

The Nisga'a co-manage the park with the province. A ministry official told The Tyee the Nisga'a voted to re-draw the park's boundaries on Oct. 29. The next day, Environment Minister Mary Polak introduced a bill in the legislature to amend the park boundary.

The integrity of modern day treaties such as Nisga'a, which officials say paved the way for this deal, are now in question, Gosnell-Myers said.

"Do we want modern treaties that need to sacrifice their way of life and sacred sites for short-term gains that take us 60 years in the future?" she said. "I just don't think enough thought has been put into signing a treaty and then facing either bankruptcy, or selling off what little land you're able to negotiate. I think that's the bigger question."

Gosnell-Myers said that the Nisga'a treaty was supposed to elevate Nisga'a from being wards of the Canadian government. "If we're not consulted about important matters such as the destruction of our ancestral burial ground, then we are wards of this state -- we are wards of Nisga'a Lisims government," she said.