The Olympic movement isn't ready to replace its "faster, higher, stronger" motto with "take the Games, please!" quite yet. But there is cause for concern less than a year since German Thomas Bach assumed the presidency and began a top-to-bottom rethink of the five-ring circus. 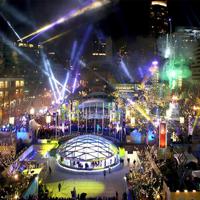 Ten Legacies of the Vancouver Olympics

Last weekend, more than two-thirds of voters in Krakow, Poland decided against bidding for the 2022 Winter Olympics. That leaves the Ukrainian city Lviv, Oslo, Beijing and Almaty, Kazakhstan.

It may be a tall order for Ukraine to find peace and stability before the International Olympic Committee decides on the 2022 host city in Kuala Lumpur in July 2015. Oslo was the 1952 host, and the 1994 Games in nearby Lillehammer were the last "small market" Games, but the Norwegian government may not back the bid.

It may come down to smoggy Beijing and Almaty, the largest city in the mineral-rich, former Soviet republic of Kazakhstan.

The decision on summer 2024 isn't for three years, but New York and Philadelphia have already decided not to bid. The U.S. is the perceived frontrunner because it hasn't hosted a Summer Games since Atlanta 1996 and NBC, the IOC's biggest funder, agreed to pay $7.75 billion to broadcast the Games from 2022 to 2032.

Los Angeles (the 1932 and 1984 host), Dallas, Boston, Washington, D.C. may throw their hats in the ring, but will their citizens balk at the cost and inconvenience of such a mega-event?

The last sporting event of the Vancouver 2010 Winter Olympics, the men's hockey final, went into overtime. Likewise, it's taking longer than anticipated for VANOC to wind-down, but fewer people are both involved or watching.

"We're very close to being no longer and by this time next year, we will, in fact, be no longer," Furlong told the IOC.

Fast-forward almost three years, and VANOC's board is still working on the wrap-up.

In late May, Dobell offered neither a definite deadline for the end of VANOC business nor an explanation of why it is taking so long.

"We are moving ahead, albeit slower than anticipated," Dobell said. "You should see formal announcements in the next few months, and be able to access a wrap-up financial statement."

Dobell said that VANOC balanced a $201,000 budget for the last fiscal year. The last VANOC public financial report, for the period ended July 31, 2010, was released a week before Christmas in 2010. It claimed a balanced $1.884 billion operations budget, but that was after almost $188 million in additional taxpayer funding.

Dobell did reveal that he resigned as Hill and Knowlton's B.C. chair and also from lobbying the provincial government in general. The former Vancouver city manager and deputy to premier Gordon Campbell joined Hill and Knowlton in 2009 while on the VANOC board.

A strategic re-think of the Olympics was announced even before the $50-billion Sochi 2014 Winter Olympics became the most expensive Games of all-time. Sochi's predecessor was Vancouver, whose organizers and citizens grappled with the biggest economic crisis since the Great Depression.

The FIFA World Cup, to kick-off June 12, isn't universally welcome in Brazil, where there is widespread anger about the record $11-billion price tag at the expense of underfunded hospitals and schools.

For Dave Cobb, who was deputy CEO of the Vancouver 2010 Winter Olympics, it is not necessarily a bad sign that some cities and countries are having cold feet in the bid phase.

"I think it's more of a positive trend that far more due diligence is done, and far more economic analysis is done," said Cobb, managing director of corporate development for the Vancouver-based Jim Pattison Group. "There's so many factors outside the control of an organizing committee, and even outside the control of a host country, there's clearly risk with any large event like this."

Bach has maintained that the review, called "Agenda 2020," is more than navel-gazing. The roster of 14 working groups includes the head of London 2012, Sebastian Coe, and the second-in-command for Salt Lake 2002, Fraser Bullock. Nobody who worked on the day-to-day execution of the Vancouver Games was named.

The only Canadian Olympic Committee members involved are president Marcel Aubut and Montreal-based IOC member Dick Pound. In typical diplomatic fashion, the IOC downplayed the lack of Vancouver faces and offered no explanation.

"The members of the working groups and commissions are selected across the whole Olympic Movement for their expertise and experience," said media relations head Emmanuelle Moreau via email. "As you mentioned, two members from Canada will contribute to the work of the Olympic Agenda 2020 working groups and will look forward to their active participation."

Only one ex-big-wig lands a gig

The latest appointments are part of a pattern since the Vancouver Games. The IOC traditionally calls upon senior executives from previous Games to join the coordination commission, which checks up on host cities two or three times a year during their seven-year arc. Instead of a former VANOC executive on the PyeongChang 2018 coordination commission, Sochi 2014 boss Dmitry Chernyshenko was appointed.

The only ex-VANOC bigwig to have a high-ranking assignment with the IOC since the 2010 Games is chief financial officer John McLaughlin, who was the financial expert on the temporary committees that studied the Winter 2018 and Summer 2020 bids. Ann Duffy, vice-president of sustainability, was named an expert advisor to the sport and environment committee earlier this year.

As for Cobb, when his VANOC job was complete, he became too busy to remain involved with the Olympic movement.

"When I look back it was almost six years and I wouldn't trade it for anything," he said. "I immediately moved to another big job [as BC Hydro CEO] and have since moved to another even bigger one. I was called about numerous things, not about any specific committees. I got the word out that I was sort of done and wasn't interested personally in doing any of that. I don't know if any of that would have come or not."

Even before John Furlong became mired in lawsuits over unproven allegations he abused pupils in 1969 and '70, the ex-VANOC CEO had a full schedule. He also ruffled some IOC feathers. The chair of Own the Podium, Rocky Mountaineer and the Vancouver Whitecaps and board director with Canadian Tire and Whistler Blackcomb was critical in his Patriot Hearts memoir of PyeongChang's Samsung-backed 2010 bid.

His 2011 book also revealed a 2003 deal cut with the mayor of Moscow, Yuri Luzhkov, for Vancouver experts to advise Russia on how to make a bid in exchange for Russia's votes at the host city election in Prague. The Russian alliance may have been the difference. Vancouver beat PyeongChang by three votes on the second ballot.

The IOC frowns on any suggestion of vote-buying, just like it did in early 2003 when the Vancouver bid committee was caught sending Hudson's Bay Co. blankets to IOC members. Correspondence on file at the Vancouver city archives shows Furlong apologized profusely to the IOC ethics committee, which was ultra-sensitive in the wake of the Salt Lake City bribery scandal.