A tense conflict between commercial fishermen and central coast First Nations near a northern British Columbian herring roe fishery has concluded peacefully. But while a crisis was averted this year, those involved say the main catalysts behind it -- problems with the government's management of fisheries -- go unresolved. 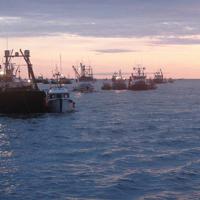 Last week, commercial fishermen caught the last of their allocated 750 tonnes of fish without entering aboriginal territory waters, where a group of First Nations waited, ready to disrupt fishing activity. The nations had pledged to protect herring stocks by any means necessary.

The conflict began last December, after federal Fisheries Minister Gail Shea went against her own staff's advice and reopened commercial roe fisheries on the central coast, the west coast of Vancouver Island and Haida Gwaii.

That decision was followed by legal battles, losses for fishermen and almost open conflict.

But while this year ended quietly, Slett wonders whether the conflict will simply reignite next year. At the heart of the controversy was, and still is, a dispute over government management and the science it's based on, which First Nations and researchers call too uncertain.

In 2006, the central and west coasts were closed to commercial roe fishing to protect a declining herring stock. The stock had dipped below the 25 per cent cut-off where commercial fisheries are considered no longer sustainable.

In 2013, a Department of Fisheries and Oceans Canada assessment indicated the stock had rebuilt, and although it remained near the cut-off, was high enough for fisheries to return to a 10 per cent catch rate, or half of what is normally allowed.

Heiltsuk elders had already lived through two stock collapses under DFO management, and couldn't afford another one. The small community of Bella Bella depends on its ability to fish for food, but also commercially. In profitable years the Heiltsuk can pull in $4 million from herring roe, which has a lucrative market in Japan, Slett said.

"We were managing these resources for thousands of years before there was any DFO regime," Slett said. But under government control, herring along with salmon has steadily declined, she said. "We feel that in our communities."

When an internal DFO memo revealed how Minister Shea overruled DFO's own recommendation of upholding the fisheries closures, First Nations trust in government management took a further hit, she said.

Slett hopes the government will consult with First Nations for the next season, as everyone is interested in seeing a healthy fishery. "But to get to that, it has to be managed with some foresight," she said.

Despite internal disclosures, Minister Shea maintains that her decision to reopen the fisheries was based on "solid fishery science." The 10 per cent harvest rate is a conservative measure implemented by the government to protect stocks, she said.

But according to DFO staff, the conservative catch rate was proposed by the herring industry, which had been growing frustrated with the department's closure of roe fisheries.

"It would seem this government is keen on listening to the industrial lobby," said Dr. Tony J. Pitcher, founding director of the Fisheries Centre at the University of British Columbia.

As well, the minister's science doesn't consider the herring's complex role in the ecosystem, he said. Herring is classified as a forage fish, placing them dead centre in the food web, a visualization of what-eats-what in nature.

Many species eat herring, said Pitcher, and failing to consider that opens up the risk of overfishing. Worst case, it could impact the survival of salmon, humpback whales, "and lots of other animals that feed extensively on herring," he said.

Pitcher added that DFO's capacity to manage herring and fisheries has been curtailed in recent years, with Ottawa persistently downsizing the department in an effort to reduce the federal deficit.

In 2013, $100 million was cut from the department's $1.9-billion budget. That same year, a DFO internal review concluded that the department was at risk of losing trust, confidence, and even its reputation among the public and own staff.

"There are a lot of good people and scientists at DFO, but the numbers of people working on any particular problem are diminished," said Pitcher.

Dr. Douglas E. Hay is one of those scientists, and although officially retired from the University of British Columbia, he still keeps his old desk at the Pacific Biological Station in Nanaimo. That's where DFO conducts its herring assessments, and where Hay spent the greater part of his career studying herring biology and ecology.

Contrary to Pitcher's claims, Hay argues B.C.'s herring roe fisheries have been very conservative compared to others since the 1980s, when the concept of a commercial cut-off and a normal 20 per cent catch rate was introduced by industry and DFO.

In one way, that's a recognition of herring's importance to the ecosystem, he said. "Although there is some room for fine-tuning."

The cut-off is misconstrued as the level where herring are dangerously near depletion, when it should simply be seen as a safety measure that ensures there's enough herring for stocks to replenish, Hay said.

In 2007, Hay led a research group that investigated the "serial depletion effect," a hypothesis that blames commercial roe fisheries for the past decades' decline of B.C.'s wild herring. After comparing 36 years of catch and spawn data and linking it to almost 100 different geographical locations, the team looked for a connection between the fisheries and the decline.

They found nothing. "The evidence wasn't there," said Hay. He thinks the explanation is more likely to be found as a result of coastal industrialization.

It's practically impossible to take the herring's role in the ecosystem into account when assessments are made, said Dr. André Punt at the school of aquatic and fishery sciences at the University of Washington. "Pretty much nobody in the world does that."

Fisheries departments send stock assessments to Punt for review and he recalls perhaps two places on the East Coast that effectively include the ecosystem. It can be done, said Punt, but it's extremely complex, especially dealing with a fluctuating species like herring.

In most cases, it is enough to monitor population trends, as that gives a rough estimate of annual predation, he said. Fisheries management is not based on perfect knowledge of the system; it's based on uncertainty, he added. "The real challenge is how to quantify that uncertainty."

DFO could shift to an ecosystem-based assessment, said Dr. Daniel Pauly of the Fisheries Centre at UBC. In 2012, Pauly co-authored the report "Little Fish, Big Impact," which stressed the importance of carefully managing forage fish. He said one of the most common models that can be used was developed at the Fisheries Centre.

There is a catch to including the ecosystem in assessments, Pauly warned. In most cases, it reduces the number of fish that can be harvested, as more must be left over as feed for other species. "Industry is not fond of this," he said.

But most cases doesn't mean always, said Pauly, and it could be that the herring doesn't play as large a role in the ecosystem as some think.

The point is we don't know, and won't know, until DFO steps up to find out, he said. "If anything, [it will be] due diligence and reassure First Nations."