Ocean acidification -- which occurs when the ocean absorbs more carbon dioxide -- threatens one of the most dominant life forms on shorelines, mussels, by making it tough for the bivalve to keep itself glued to rocks. 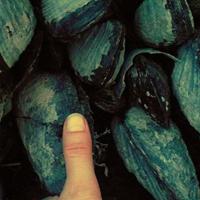 Mussels rely on fine fibres, called byssal threads, to keep themselves anchored. Researchers at the University of Washington's Friday Harbor Laboratories have been studying mussels' response to rising levels of carbon dioxide in the atmosphere, including testing the animals' ability to stay put. Their latest research on ocean acidification appeared Monday in Nature.

"We had no evidence that these mussels are responding to acidification other than the byssal threads," says Michael O'Donnell the lead author of the paper. "And just a tiny change in pH level changes water conditions enormously."

The study is one of the first to look at biomechanics of tissue other than the mechanical performance of calcified bits, an organism's shell.

O'Donnell and his colleagues collected 144 bay mussels (Mytilus trossulus), from Argyle Creek on San Juan Island and brought them back to the lab. To study how changing ocean chemistry affected the animals, the researchers placed two mussels in 3.5 litres of seawater inside insulated coolers, controlling the temperature, filtering out the carbon dioxide, then pumping it back in regulated amounts. Mussel pairs were subjected to one of nine pH levels, ranging from 7.5 to 8.14.

After three weeks at one pH level, a mussel pair was analyzed. Researchers measured one for physiological stress, determining that carbon dioxide levels did not affect food absorption, or reproduction, or shell formation. The other mussel went through a byssal thread strength exam. To test the byssal threads, O'Donnell and co-authors Matthew George and Emily Carrington used the same instrument material engineers use to measure the strength of various objects, from plastic bags to concrete to rebar.

They superglued one end of a byssal thread to cardboard, while the other end was attached to a pebble about a centimetre in diameter, an attachment formed by the mussel, as it would fix itself to a rock in the wild. Then they clamped each end of the byssal thread, which remained in the water. Finally -- like a tug-of-war -- the machine pulled until the byssal thread broke, measuring the force at which the material failed.

"It's fiendishly tedious," O'Donnell says. "It's very difficult to clamp them, and I would probably get through two threads an hour. Matt was good at this, he got through three or four an hour."

After spending almost three months breaking hundreds of byssal threads, the researchers found that as carbon dioxide levels rose, forcing down the pH level, a specific part of the thread broke most often -- the plaque, the part that looks a little like the foot of a cartoon UFO, the part the mussel glues to the rock. It weakens substantially as ocean pH falls. After a thread's failure, the researchers would assault it again, testing the next breaking point. (The distal region, the area that works like a bungee cord, retained its integrity under all conditions.) The vulnerability of the plaque means the mussel loses up to 40 per cent of its ability to stick to rock when pH levels drop to 7.5.

The average ocean pH is about 8.1. But the intertidal zone, where mussels live, has variable levels since it's a dynamic system influenced by the atmosphere, land, and ocean currents. O'Donnell, measuring waters around Friday Harbor, found the pH levels are typically 7.7 or 7.8. And from about the mid-21st century on, if carbon dioxide levels keep rising, pH levels will decline, possibly to 7.5. (It may not seem like a huge jump, but as the researcher points out the pH scale is a logarithmic scale, like the Richter scale for earthquakes: an 8.0 earthquake is 10 times worse than a 7.0.)

Chris Harley, an ecologist at the University of British Columbia who also researches the affects of climate change on intertidal species like mussels, applauds the lab's step away from the low hanging fruit of ocean acidification studies, the focus on shell formation and larval development.

"Ecologists only really figured out that ocean acidification would be a problem in about 2006, so we've been playing catch-up on what all the implications are," Harley says. "And for mussels, the major threats to their mortality are sea stars and ocean waves ripping them off the rocks."

O'Donnell and his colleagues also get points for studying a wide range of pH levels, Harley says, when most studies in the past have compared the effects of two levels, the present and potential future.

To adapt to changing pH levels will be a challenge, considering the ocean chemistry is changing at least 100 times quicker than it has changed during the 650,000 years prior to the industrial revolution. For the worldwide mussel aquaculture business, valued at $1.5 billon US in 2009, the news is almost more worrisome than rising ocean temperatures. To cope with temperature changes, mussels can be moved around to cooler waters. That strategy, however, won't work for changing pH levels.

For the wild mussels that define the rocky shoreline, a changing climate further magnifies the threat to their survival.

"One of the other things that's changing in addition to ocean acidification is how stormy the coasts are getting," Harley says. "So the possibility that mussels will have trouble attaching to rock in places where waves are getting bigger, well, that's a double whammy."