[Editor's note: Regular Tyee contributor Jude Isabella is filing reports from the American Association for the Advancement of Science annual general meeting in Boston this year.]

Just south of Vancouver, in a marine science laboratory in Friday Harbour on San Juan Island, finger-length mussels rest on cobbles the size of marbles in water from the Salish Sea. They reside in groups of three in containers the size of beer jugs. The bay mussel (Mytilus trossulus) is sharing some of its secrets with researcher Emily Carrington -- not bad for an animal with no brain. But Carrington has a knack for getting them to "talk."

A scientist at the University of Washington, Carrington studies ecological mechanics. In this case it's the form and function of mussels in their environment, the dynamic intertidal zone, and what she's found is that a biological material -- in this case the mussel's sticky threads, called byssus -- functions only as well as its environment allows. So, yes, climate change is the villain that could rob the mussel of its biological superpower, an ability to cling Spiderman-like to hard surfaces, with the added assault of pounding ocean waves.

The cobbles allow Carrington's lab to study individual threads for adhesion to a natural surface, as mussel will generally attach one byssal per cobble. Think of a byssal thread as a bungee cord -- springy yet strong enough to keep alive a 200-lb. man who wants to jump of a bridge.

"When I started, I thought [the dislodgment problem] was all about the waves," says Carrington, sitting at a white-clothed table, her face glowing with health, likely a sign that a year-long sabbatical conducting research in Sicily is good for you. "I was so naïve. It turns out a whole bunch of environmental factors, not just waves, affect mussel attachment."

A researcher at the University of Rhode Island at the time, Carrington worked with blue mussels (M. edulis), native to New England. Assuming the force of ocean waves was responsible for dislodging mussels from their perch, the scientist was puzzled over what could be more important than the force of ocean waves. Some of her first experiments, carried out by graduate student Gretchen Moeser, focused on the number of byssal threads a mussel had in different wave conditions. Carrington calls them "jiggling" experiments. Moeser would agitate mussels attached to a surface and then count the byssal threads, assuming she would find more byssal threads with more agitation. That didn't happen.

At any one time, a mussel will have about 40 to 100 byssal threads, a number based on studies done at Bamfield Marine Biology Lab on Vancouver Island. A byssal thread erodes over time, and mussels grow another, an activity they spend a lot time on over their relatively long lives. Bay mussels live anywhere from two to 10 years, while California mussel (M. californianus), found on the outer coast of Washington and British Columbia, such as Bamfield and Neah Bay, live up to 30 years.

To figure out what role byssus played in attachment, Carrington and her student tried something else. They bought granite flooring and cut it into iPhone size plates and had mussels secrete byssus, in winter and in summer. They attached the plates to Narragansett Pier, not far from the URI's oceanography institute. In winter, a byssal thread would last two months. In summer, a byssal thread would not last two weeks.

"It never occurred to me that material itself would change," Carrington says. The result took her back to her scientific roots, to research she began at the University of British Columbia, in the biomaterials lab of spider silk expert John Gosline, the lab where she began her study of the threadlike filaments mussels secrete.

Once the pieces fell into place, predicting dislodgment was easier. Mussels weaken in summer probably due to a number of factors: the stress of reproduction, higher parasite load than winter, less food to eat, and higher temperatures. In fall, these stressed mussels face more storms (and maybe even more storms as the climate changes) and are more likely to become dislodged. In winter, their stronger threads will likely keep them grounded. By spring they're sending out high-performance fibres.

This function -- sticking out a foot over and over to leave behind a thread to tether itself to rocks -- makes mussels super successful at dominating shorelines with hard, granitic rocks. This ecosystem domination also makes them what's called a foundational species: remove mussels and the ecosystem is fundamentally altered. Much like Pacific salmon (animals that bring back nutrients from the open ocean, indirectly feeding plants and animals that live in and alongside spawning streams on the West Coast) filter-feeding mussels provide ocean nutrients to other animals. One liter of water per hour percolates through a mussel's system, straining a marine super-food, phytoplankton. Some of the species that share a mussel's neighbourhood, such as crabs, access phytoplankton only indirectly by feasting bivalves like mussels.

Currently, Carrington and her students at Friday Harbour are working on a few projects looking at climate change and mussel byssus. Since her earlier research tied warmer summer temperatures to weaker byssal threads, Carrington paid closer attention to temperature. One lab project has already revealed that mussels -- again, like salmon -- are fussy about temperature. In lab experiments, the byssus of bay mussels kept their superpower ability with temperatures as high as 18˚ C. But start cranking the heat to 23˚ C and above and the byssal attachment weakens. At a sustained 25˚ C a byssal thread is 60 percent weaker than normal. 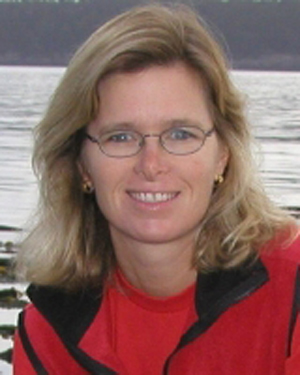 After three years of data, Carrington has noted that during May through August, the water drained into the Salish Sea from the Fraser River is 3˚ C warmer than at other times of the year. Worrisome, given that Canadian researchers have reported that over the past 50 year, coastal B.C. waters have warmed -- a full 1.5˚ C in the Strait of Georgia, a bit less in other areas.

At the Friday Harbour lab, research continues with Carrington and her colleagues mimicking environmental conditions, but trying to control for the independent affects of other factors, such as food supply and light conditions. Another project, in collaboration with Patrick Martone, a UBC botanist interested in the biomechanics of marine macroalgae, is studying ocean acidification and its affect on calcified algae.

A study of waters off Tatoosh Island off the cost of Washington State, has documented a decrease in pH over a 10 year period, 2000 to 2010.

The ocean acidification research will be released in the next coming weeks.