"Naphtha" is one of the oldest known forms of petroleum: it was used by ancient Persians and Greeks. Today it's used in lighter fluid, camp stove fuel -- and to dilute oil sands bitumen. 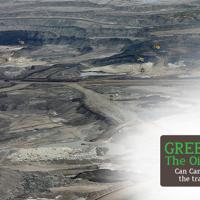 Could Alberta's 'Tar' Pave the Road to a Green Canada?

Naphthenic acids are corrosive compounds that occur when naphtha is oxidized. According to provincial and federal studies, they're the primary toxic ingredients in Alberta's 176 square kilometres of oil sands tailings ponds.

Mice exposed to naphthenic acids in the lab can suffer brain hemorrhages. Yellow perch born from exposed eggs are smaller than average, and more likely to be deformed.

Producers do have to report to Environment Canada how much ammonia, zinc, lead, arsenic and other toxic substances they release into those ponds. In 2010, Environmental Defense requested that naphthenic acids be added to the list.

A June 2012 working group, organized by the feds, concluded there were too many unknowns to make the request feasible: Would it be burdensome to measure these acids? How broadly should they be defined?

Then, last December, Environment Canada announced it couldn't make a decision until sometime later in 2013, at the very earliest. A four-year federal "risk assessment" on naphthenic acids, however, isn't scheduled to begin until 2016.

One Canadian cleantech firm claims it could remove nearly all the naphthenic acids from tailings ponds. But no measurement of what's being released means no environmental regulations means no worried investors means no market for technology to clean it up.

No matter how persuasive their pitch, University of Calgary business professor Harrie Vredenburg told The Tyee Solutions Society, "[An oil producer] would say, 'Well, what economic benefit does it provide us? Will it get us more efficiencies? No? Otherwise we don't have to comply with any regulation on this, so we're not interested.'"

For Montreal-based Gradek Energy, it was the 1989 Exxon Valdez disaster. The company's founder and current president, Thomas Gradek, designed a lightweight bead about the size of a Kellogg's Corn Pop, whose surface attracts oil.

Deployed in large quantities, you could clean-up oil slicks without any chemicals.

But major spills are inherently difficult to predict. They require global assets. By the early 2000s, it made more financial sense to focus on a different kind of disaster, slowly unfolding in Northern Alberta.

Since 1967, Oil sands producers have pumped more than 840 million cubic meters of tailings waste onto the landscape. That's the equivalent of a third of a million Olympic swimming pools. But mixed in that waste is a valuable commodity: about 172 million barrels' worth of bitumen, Gradek Energy estimates.

The firm's beads could recover 98 per cent of that bitumen, a recent pilot study suggested. They would also make tailings ponds less toxic, the company claims. Tests show they could reduce naphthenic acids by 95 per cent.

The technology has piqued interest from BASF, the world's largest chemical company, and Veolia Water, a global supplier of water solutions. Both are collaborating with Gradek Energy.

"Companies like these would not waste any time with us if they didn't see big potential," Robert Andrews, the firm's business development Sr. VP, told Tyee Solutions.

More than 60 of Canada's 720 cleantech firms offer solutions for cleaner oil sands, according to Analytica Advisors, an Ottawa-based consultancy. They're relatively small companies, deeply driven by environmental concerns but equally motivated by profits.

Cleantech firms share many goals with Canada's green movement, but disagree on tactics. Activists wage war against the oil sands industry. Cleantech treats it as an ally and buyer of its products.

Still, green technology is implicitly critical of the status quo.

"They need to know your technology will work," Andrews said. "It takes a little while to do some convincing."

That convincing might be easier to do if naphthenic acids weren't released unmeasured each day into oil sands tailings ponds. Last December, when Environment Canada decided to maintain that status quo, it blamed uncertain science.

For one thing, researchers are divided on what the label "naphthenic acid" actually refers to.

Uncertainty means that nobody's quite sure which naphthenic acids should be measured, whether the category itself needs to be broadened, or precisely how much can be safely released into the Athabasca Region.

But that doesn't have to be an excuse for inaction, Pembina Institute oil sands program director Jennifer Grant says: "We shouldn't let lack of research keep us from setting precautionary limits."

Instead, governments haven't set any limits. Therefore producers don't treat naphthenic acids as a distinct financial liability. Investors aren't worried about them. When toxins can be dumped into the environment for free, clean-up solutions from Gradek Energy and others are a harder sell.

"The current marketplace does not necessarily value sustainability," said Vredenburg, the business professor.

Measurement is the first step in creating a marketplace that does. But clarity on environmental impacts doesn't have to be punitive for oil sands producers. Sometimes, it brings benefits into clearer focus.

In 2011, an industry-government consortium began evaluating more than 500 tailings pond treatment technologies. They came from all over, the Daily Oil Bulletin reported, some "literally from people's garages."

Gradek Energy's beads were deemed a "high priority" option for recovering bitumen from tailings waste. But an Aug. 2012 overview report determined that more testing was needed to address concerns about cost and clean up.

Even if the beads satisfied all testing criteria, it could be 10 years or more before they were adopted widely. "This fact must be recognized when planning tailings management improvements," the report explained.

Part of the problem is that industry lacks some basic knowledge. One nagging question: Are tailings easier to deal with once bitumen has been removed?

But quantifying the environmental 'plus', the report recommended, "would greatly improve" technology decisions. With the proper data, producers could determine if Gradek Energy's beads were truly a "win-win" for the economy and the environment.

Fair's consortium is now helping lead that research effort. "We're trying to understand where the value comes from," he said.

After forty-five years of oil sands production though, we still know little about its impact on the Athabasca Region. Few are better aware of this fact than renowned University of Alberta biologist David Schindler, who's studied pollution in Canada's lakes and streams over the same time period.

It was Schindler's dramatic presentation of deformed Lake Athabasca fish that helped convince the federal government in 2010 to create an independent oil sands water-monitoring panel.

Work on a $50 million joint federal-provincial panel still continues. Though it should be fully deployed by 2015, release of initial data has stalled, and no structure yet exists to collect funding from industry.

"There's been all kinds of foot-dragging," Schindler told Tyee Solutions.

In the meantime, important questions remain unanswered. Among them:

How will climate change affect Athabasca River flow levels? Are its tributaries conduits for pollutants? Where are the critical fish habitats? What's industry's impact on groundwater?

"We don't really know all the things we need to," Schindler said.

Until a problem has been measured, defined and regulated, it doesn't become a financial liability for oil sands producers. Right now, Schindler argues, "there's very little incentive to reduce water use". Or, he said, for producers to adopt the clean technology of Canadian innovators.

Nor is there much urgency about naphthenic acids.

The Alberta government's recent Lower Athabasca Regional Plan (LARP) acknowledges these substances are "important indicators of concern given their toxicity."

If we as a society want to create a marketplace that truly values sustainability, those gaps are the first thing standing in our way.