If you ask Stephanie Coontz, gender equality in the U.S. has stalled. Co-chair and director of public education at the Council on Contemporary Families, Coontz's opinion piece in the Feb. 16 edition of the New York Times slams America's lack of family and women-friendly work policies for keeping women in the domestic sphere. 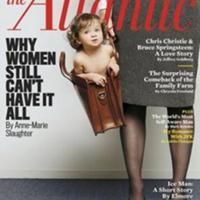 Women Never Said 'We Wanted it All'

Without paid parental leave, affordable childcare, and salaries high enough to keep families out of debt, Coontz says the work/life balance of Americans, especially women, is bringing their stress levels to a breaking point.

But Canadians shouldn't be smug. We have paid parental leave, but once those 12 months are up dual-earning families are back to working an average of 77 hours per week compared to America's 82.5, and paying more for childcare than they would putting their kids through university. As a result parents, especially women, are overworked trying to take care of their families while working more than ever before just to pay the bills. If equality for women isn't stalled in Canada, it's certainly slowed to a crawl.

"The data shows Canada has been oscillating somewhere between 18th and 30th in the world for gender equality achievements," said Paul Kershaw, a researcher at the University of British Columbia's Human Early Learning Partnership (HELP), quoting data from the World Economic Forum's 2012 Global Gender Gap Report.

Kershaw advocates for family friendly policies like reduced and flexible work hours, universal childcare, and 18-month parental leave that can be shared between parents.

Combined they would cost the B.C. government $3 billion annually, but would return $700 million each year through parent's increased workforce participation.

But these aren't new proposals: "They were first made in the 1970 report on the Royal Commission on the Status of Women: 43 years ago. And the problem is we've made very, very little progress in the 43 years since and Canada is a laggard compared to most countries now," he said.

Seventy per cent of America's children live in a household where all the adults work, yet the U.S. government hasn't implemented any major initiatives to help with work/life balance.

In comparison 75 per cent of Canadian kids live in houses where their guardians work (Statistics Canada's statistic does not include adult siblings, and we are unsure if the American statistic makes the same distinction.) Of all the working mothers in the country, 69 per cent have at least one child aged three or younger.

Canadians in general are working much more than some of their foreign counterparts: 300 more hours per year than the average German, Norwegian, or Dutch worker, according to Kershaw.

He blames our work ethic on a high cost of living combined with low wages. Young workers are making 13 per cent less than their parents did at their age, despite spending more time in post-secondary education. Meanwhile housing prices across the country are up 80 per cent; in British Columbia it's a whopping 150 per cent.

"The coping mechanism for younger people who are in their prime child bearing and rearing years has been to work more and postpone [having families]," said Kershaw.

But not all families are putting off having babies. A 2012 Carlton University study on the work/life balance of 25,000 Canadians found two-thirds of all participants were parents. But just over half of the women surveyed were the primary or equal earners in their households, and one in three women reported their male partners were the primary childcare givers in their families.

The study's authors concluded that in families where women are the primary earner, the men take care of the babies.

The Tyee contacted two women who study work/life balance for an interview, including Carlton study co-researcher Linda Duxbury, a professor at the university's Sprott School of Business. But Duxbury's plate, not surprisingly, was too full to meet our deadline and the other contact did not respond to our interview request.

Jacques Barrette, director of the Centre for Academic Leadership at the University of Ottawa and author of a Vanier Institute of the Family study on work/life balance, says men are gradually taking on more responsibility in the home.

"There is a trend that there is more men involved in the education of kids and different aspects at home," he said.

"But there is still more weight for women to do the education, to do the regular activities at home. So there is more stress on her compared to the man."

Kershaw believes the glass ceiling not only still exists for women because of their over-sized share of motherly and household duties, he says it's actually thickening.

"It continues to be assumed that young women more than young men will make compromises to their careers when starting a family, and as a result that's influencing career trajectories," he said, although he, too, acknowledges that gradually more men are stepping up their child rearing game.

Despite dads' increased participation in child rearing, however, Barrette's research found women were more likely than men to experience burnout and depressive states due to stress, and unlike men who typically relax at home, the blood pressure of female managers and professionals actually goes up at home.

Children's Chances, a database of global laws and policies that affect children developed by the World Policy Analysis Center, has established a set of family-friendly work policies that benefit the healthy development of children.

Childcare is one of those policies, but their data on what countries provide for childcare doesn't tell the whole story.

For example, their data points out that Canada offers childcare benefits to families. But they don't elaborate that it comes in the form of the Universal Child Care Benefit, a $100 cheque once a month for all families with children under six years old. It's little relief to families in British Columbia, where childcare ranges in price from $9,000 to $14,000 per year.

"It is impossible for women to fully participate in the life of their communities, to work in paid employment, often to volunteer, or to attend post-secondary education if they don't have quality childcare services that are affordable and accessible to them," said Sharon Gregson, spokesperson for the Coalition of Child Care Advocates of BC (CCABC).

"It's the most fundamental aspect for participation of parents with young children."

The lack of affordable childcare in Canada has been panned by the Organization for Economic Co-Operation and Development, UNICEF, and the UN Committee on the Rights of the Child. CCABC is one of over 100 organizations, municipalities, and politicians who support a $10 a day childcare plan for British Columbia.

Similar to the $7 a day childcare plan that already exists in Quebec, the B.C. plan calls on the government to invest $1.5 billion per year into early childhood education so families spend no more than $10 per day -- or $300 a month -- for childcare spaces. Families making less than $40,000 a year would pay nothing.

But Kershaw, who also advocates for the $10 a day plan, says there's a "slightly darker" force at play that caused Quebec and several Scandinavian countries to implement family-friendly policies like universal childcare, and it's one that doesn't apply to immigration friendly Canada.

"Quebec has something at stake in family policy that the rest of English Canada does not. Quebec worries on a day to day basis about how to reproduce a French-speaking population," he said, which led to considering gender equality policies like affordable childcare.

Like Quebec, Scandinavian countries wanted women to have more children instead of relying on immigration to boost the country's population: "So they saw the connection between that population policy and the place of gender equality to the extent women were making choices about their reproductive patterns because of the inability to balance work and family."

Despite the increasing work/life balance pressures, Canadian women on average are having 1.67 children. But Gregson says it's shortsighted of government to believe families can continue this trend if childcare services don't improve.

"There's so many more women who, I'm told regularly, could move off social assistance and into post-secondary and into jobs if they only had childcare," she said.

"So while some of us might be making do, racking up our credit cards and not buying homes, other people are not even remotely getting the opportunities that they should be having if childcare existed."

But both Kershaw and Barrette say we can't lay all the blame on government. If we want to improve our work/life balance, Canadians need to make changes of their own, too. First of all, if we can, we need to work less: if double earning families can make do working 70 hours per week instead of 77, we should do so.

Second, men need to take more responsibility in the household, and parents of both sexes should be sharing parental leave when a baby is born.

"I still hold out hope that we can have men continue to show the degree of elasticity that women have and stretch further into the home sphere and share a more equal division of labour at home," said Kershaw.

But these solutions are decidedly middle-class, aimed at families who can scrape by with reduced hours or work at businesses that can afford to top up their maternity leave. For lower income families or single mothers, government intervention is needed and the best place to start is affordable childcare.

Gregson and her colleagues at CCABC will be using International Women's Day to put the spotlight on childcare and draw attention to women's work/life imbalance. In addition to lobbying political parties to support the $10 a day childcare as we approach the provincial election, CCBAC is throwing its support behind a town hall forum on Women’s Economic Rights and Child Care on March 7, and a march in favour of $10 a day childcare from Jericho Beach to Premier Christy Clark's constituency office on March 9.

"The women in our country are not being well-served, even though we're taxpayers," said Gregson. "We don't have the services available to us that our taxes should be buying."