Andrew Nikiforuk is Canada's leading muckraker about Canada's most controversial muck: the tar sands of Alberta. He earned that notoriety with his award-winning book Tar Sands: Dirty Oil and the Future of a Continent. 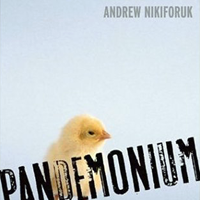 And, starting today, he is writer in residence at The Tyee. In the months to come, Andrew will be writing a regular column under the heading of Energy and Equity. The first example, our cover story today, tells you what a parliamentary standing committee didn't allow you to learn when, last week, it abruptly stopped looking into tar sands contamination of water, killed the final report and shredded all drafts.

Andrew painstakingly pored over what the committee had heard and been shown, and today he constructs a damning picture of grievous pollution made possible by lax regulation and a government that would rather kill reports than learn from their contents.

On the phone from Calgary, where Nikiforuk lives with his wife and three sons, he described why, even though he has written an entire book on the tar sands, he savours the opportunity to stay on the file and share his findings with readers of The Tyee. He acknowledged the excellent work that Tyee reporters Geoff Dembicki and Mitchell Anderson have been doing on the issue in recent months, offering that "unfortunately the tar sands project is so extraordinarily large and beyond a scale that most can imagine, you could have 100 reporters covering it and not tell the story."

Nikiforuk said his intent is to widen his scope to examine all angles of Canada's morphing into a petro state, a political and cultural sleepwalk that he believes will profoundly change our character as a people. So far, it is proceeding with very little serious public debate.

"I want to start more conversations about energy in general, as well as fossil fuels and how they've changed our thinking and our culture. I want to look at the whole concept of energy slaves. Slavery ended just as the age of petroleum began. One barrel of oil does the same amount of work as one human slave working for eight years for a family. When people become dependent on slaves or for that matter energy slaves in the form of petroleum, all social relations change. During the nineteenth century slave societies were known for their moral carelessness, brutality and indolence. In a strange sort of way, cheap oil has given us the same sort of frailties and vulnerabilities once associated with slave owners. Nineteenth-century slave holders didn't have much insight about the moral consequences of their dependency on slave labour. Nor do we."

Saying he has been "deeply influenced" by the thinking of energy economists Vaclav Smil and Charles Hall, as well as Catholic theologian Ivan Illich, Nikiforuk said he wants to push deeper beyond the day's fleeting headlines chronicling disasters and commodity price swings.

"I want to put a whole lot of startling ideas and stories in front of ordinary people and do it in a way that doesn't give a fig about ideology. Energy doesn't give a damn for ideology but oil does fund extremist thinking on both the left and the right."

As he begins his stint as The Tyee's first writer in residence, here is what else Andrew Nikiforuk had to say...

On how the tar sands are corroding Canada's character:

"This project has begun to unravel threads in our national life. It has begun to really change our political character and economy. Now we have a petro-dollar and that has consequences for our manufacturing sector. As oil exporters we now have no credible program on climate change -- which is the same as the Saudi position. Our government's view is that we are hydrocarbon producers so we are not going to do anything to ruffle the golden goose. The project has begun to insidiously erode our traditions and institutions.

"Every part of the country knows a different part of the great tar picture. In Saskatchewan there is concern about the mining of uranium to power the tars sands development. Atlantic Canada understands the social issues associated with sending sons, daughters, fathers and siblings to live and work in Ft. McMurray. And the tar sands will eventually hollow the entire economy and tie our future as a people to the volatility of oil. We have put our eggs in one black basket. Canada's political elites, who have no imagination, have declared mining projects the size of Seattle are now our future."

On lack of resolve among political leaders in the face of petro-riches:

"Are any of our political elites offering a different vision taking us away from a petro-state future? Not yet. I think there's a possibility that [Green party leader] Elizabeth May may take a different direction. Layton has expressed some interest in thinking differently. But I haven't seen any real awareness among elites about the extraordinary political and economic risks associated with becoming a major oil exporter to a declining empire.

"Politicians who refuse to put the money aside for future generations ultimately come to represent the resource instead of the citizens. That's the whole foul nature of the resource curse. And it undoes every petro-state, rich or poor, Christian or Muslim, that refuses to discuss the curse. We now have leaders on a weekly basis defending bitumen and calling what is truly dirty and extreme, something it is not: clean and safe.

"Another risk associated with rapid development of bitumen is that this resource and greed will poison our relationship with the United States, the same way oil poisoned the U.S. relationship with Saudi Arabia. Black gold does not build strong friendships: it corrupts them.

"Oil changes everything and the thinking of elites goes all wonky. All they see is easy revenue, and there is not a lot of accountability."

On why we should be taking notes on Norway:

"Is there a right way to do this? I don't know. There's certainly a much better way. We have really failed to follow the Norwegian example. It's not perfect but at least it is fiscally conservative and protects future generations and keeps oil from totally contaminating government behavior. The Norwegians had a national debate about their oil and all political parties agreed to take the money off the table. Ninety per cent of oil-related revenues goes into a pension fund. The government must run on other taxes -- it largely runs on a carbon tax.

In contrast, here in Canada, where we have none of Norway's wisdom, our politicians have become spin doctors and salesmen for bitumen. And that's outrageous. In so doing we diminish our selves as a country."

On how addiction keeps us from seeing clearly the consequences of our decisions:

"I feel that we have failed to appreciate the portability, versatility and historic rarity of fossil fuels. We're like the typical junkie. We get this high from petroleum and this remarkable 100-year high has obliterated any sense of consequence or conscience or the need to prepare for the end of cheap oil. And we are there.

"We are behaving now like gods high on hydrocarbons. We need to behave again like human beings."

On what he hopes readers will take away from his Energy and Equity columns:

"I leave that up to readers. I hope to tell some good stories, profile some interesting people, perhaps cause you to laugh or cry, offer some better insight into human condition and our relationship to energy, and what we sacrifice sometimes when we make energy the centre of our lives.

"Maybe this project is revealing the real Canada, the dirty character that digs up rocks and stockpiles mining waste. Maybe the tar sands are giving Canadians a chance to wrestle with our mysterious resource-based identity. Who are we? What are we about? What problems do we hope to solve with this resource? Meanwhile the rest of the world is looking at the tailing ponds and the acid rain and carbon-making nation within a nation and concluding that there is such a thing as an ugly Canadian. And they find it a discomforting vision."