More than 50 HandyDart riders from all over the Lower Mainland flooded TransLink's Metrotown head office yesterday to protest in support of striking drivers. 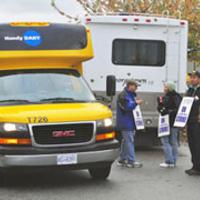 The View from a HandyDart Driver's Seat

So many came that while protesters met with TransLink communications director Ken Hardie in a board room, more than 20 waited outside in the small waiting area on the 16th floor of the Metrotower II building. Office workers looked on as elevator after elevator unloaded people in wheelchairs, on walkers and on foot.

Afterwards in the company waiting room, HandyDart user Candice Larscheid delivered a speech to acting TransLink CEO Ian Jarvis and Hardie demanding they "help the elderly, sick and disabled get back their mobility."

"What's going on around here is uncalled for," said Larscheid, who suffers from cerebral palsy.

"Quite frankly, I'm sick and tired of staying home," she said.

"Since HandyDart has been on strike, I've spent over $700 to get around," she said. "Half of us are spending our life savings to get out or not getting out at all."

Many HandyDart riders have had to take taxis over the last month, she said.

Service said to drop under MVT

Larscheid said TransLink did not take riders into account when it signed an agreement with MVT Canada Bus, a subsidiary of MV Transport, an American company based in California who bid successfully on the contract to run HandyDart last year. They took over HandyDart operations in January of this year.

The quality of the service plummeted when they took over, Larscheid said.

"You people have done nothing. Because of you we're stuck at home twiddling our thumbs. We are human beings," Larscheid said. "We have every right to get out in the community.

"This whole thing going on has to stop."

Other riders present were also vocal about the situation. "They want us to stay home and die quietly," said Lower Mainland resident Sheila Baxter, who suffers from arthritis and uses a wheelchair to get around.

Vancouver resident Jeannette Parrish has been riding the HandyDart service since 1993 when she became blind. After MVT's takeover in January 2009, "everything changed. It all went to hell in a hand basket," she said.

According to Parrish, HandyDart pickups became erratic and a few times she wasn't picked up from Mount St. Joseph Hospital, where she gets treatment. She said after the takeover some dispatchers made impossible schedules and became rude.

One time her ride didn't come. She verified the meeting time with a hospital secretary, and then was asked "how much did you pay her," by a dispatcher who then hung up on her.

"A lot of people are getting frustrated and upset having to use Vancouver taxis," said Alison Peyman, who has cerebral palsy and has been using the service for 28 years.

"It's been quite difficult. A lot of people are homebound because of it." When MVT came in, drivers' schedules got much busier, and drivers started to arrive late, she said.

Bet Tuasen, who just ran the Olympic torch in Chilliwack, said he usually volunteers at rehab clinics, but cannot with the strike. "We're stuck," he said.

Hardie said he understood the riders' concerns, adding that his own daughter has mobility issues. "I have heard everything you've said," he said. "If it was my money to give I would."

"What we got were two messages. First, the strike has to be over. The second, there's problems. This isn't working as well as you guys want and we have to fix that too," he said.

But TransLink has its hands tied, as it is not the employer. Legally the dispute is between MVT and the union.

Martin Lay, TransLink director in charge of accessibility, said TransLink has "some limitation" on what it can do, but is doing what it can to bring the parties together. "I think the best option to take here is one of negotiation."

He recommended mediation again, but this time within a framework where parties cannot leave. Previous mediation early in October ended when the mediator decided the two sides were irreconcilable.

Union representatives said they were trying to push for binding arbitration, a motion that saw some support from Vancouver Coun. Geoff Meggs Tuesday in a motion on notice, which said the mayor should urge TransLink, MVT, and the union to "resolve the dispute through binding arbitration as soon as possible."

However, MVT spokeswoman Zdenka Buric simply said "no" when asked if the company would agree to binding arbitration.

According to that section, binding arbitration can be forced on the company by a union but is rarely used.

According to the Labour Relations Board, there are other avenues towards binding arbitration.

Union representative Tyler Felbel said the union is seeking binding arbitration based on both parties consenting to submit to an arbitrator, which the union has not agreed not to seek.

Buric replied by reiterating that the union agreed not to seek arbitration and declined to comment further.

The strike entered its second month last week, with the union and MVT remaining deadlocked over negotiations. MVT wants to roll back union municipal pension plans and put all employees on a modified RRSP plan into which MVT pays six per cent.

Paul Bains, a member of the union's negotiation team, said MVT would not budge on the pension. "They said at the negotiations if the pension's on the table, we're walking out."

"I don't know why they aren't happy with the profit they are getting. They just want to get more profit," he said.

Buric denied that MVT refused to negotiate if the union did not agree to their proposal on the pensions, but acknowledged it was a main issue. "MVT welcomes the union back to the table for discussion," she said.

The union is also demanding MVT guarantee full time hours for full time workers. According to Felbel, MVT is guaranteeing 7.5 hours per workday, but not a five day work week.

Buric said she "didn't know" about the work hours.