"I hate it. I hate doing it... It's not what I signed up for." That's the lament of a former Postmedia reporter assigned all too often to write "custom content." 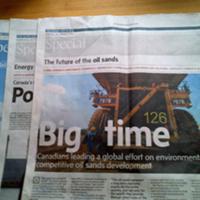 Most of us assume that media outlets still go about producing their news the traditional way -- a reporter sniffs out a lead or an editor assigns an evolving story or, these days, a columnist storifies a flurry of Twitter activity.

Increasingly, however, stories are put into motion differently. Referred to variously as custom content, custom publishing or directed content, Canada's major broadsheets and newsmagazines are now speckled with content spun up by marketers and brand sponsors.

Where commercial news outlets traditionally sold advertisers on the audiences that their journalistic product could attract, custom content allows outlets to charge brands for a seat at the table in shaping the content they produce, a voice in determining themes and story topics readers will see their advertisements associated with.

A business agrees to buy pricey ads with the assurance those ads will be accompanied by stories that fit desired themes but which seem to have sprung straight from the publication's newsroom. Indeed, custom content often runs under the bylines of staff reporters and without any disclaimer. Naturally, though, it's understood those stories aren't going to be muckraking extravaganzas targeting the ad buyer or their industry. "Custom" is inevitably a euphemism for "soft."

Also, for "lucrative." Custom content has become a rare source of revenue growth for an industry in upheaval, still struggling to replace disappearing print advertising dollars and frustrated with the peanuts they get from click-throughs from online ads. As yet, marketers are willing to pay a premium for custom content. In The Globe's Report on Business section, for example, a single page of custom content costs advertisers a cool $40,071; a four-page spread clocks in at $132,586.

While few readers know enough about this profit-driven new facet of the news business to raise concerns, the production of custom content is ringing alarm bells for the journalists charged with creating it.

Jameson Berkow is a former business reporter for The National Post. He struggled to adjust as an increasing proportion of his workload was shifted to reporting for "special sections," filing stories that were brand sponsored.

Though the stories were not, to his knowledge, ever looked at or approved by the sponsoring advertisers, Berkow was uncomfortable with having his byline on content he did not believe could be properly considered journalism.

"Every journalist knows that if they wanted to they could leave journalism, and go into PR or communications, and essentially double their salaries. The reason most journalists still don't do it is because they believe that what they are doing provides some value to society."

In one of his last pieces written for The Post this past October, Lodging in Luxury, Berkow wrote about new efforts being made by the oil sands industry, and Statoil in particular, to attract workers to remote oil sands sites with the promise of high-comfort living quarters and lavish amenities.

That piece was sponsored by Statoil.

On the day it was published Statoil advertisements could be found around the piece. But click on a link to the piece today and there is nothing to alert the reader of that relationship, nothing to tell the reader that Berkow's story came from Statoil.

Berkow is frustrated with the lack of industry standards for the labeling of custom content.

"Labeling is a very subjective issue. Every outlet can just make their own case for what they think is ethical. So you get into discussions about how big the label should be. Should it be on every page? Obviously I'm of the opinion that it should be plastered over every other word so you couldn't possibly miss it. But what tends to happen is that you get the tiny little statement on the fist page of the sequence."

And he isn't alone with his concerns.

'Reinventing' what reporters do

"One of the challenges for us as an industry is that a lot of advertisers play us off against each other," Globe Editor-in-Chief John Stackhouse complained while speaking at a recent media panel on "Reinventing the Modern Newspaper." He was frank that The Globe continues to wrestle internally with what designs and labels to use, what different cues are necessary to be transparent to readers.

Lou Clancy, vice-president of editorial and editor-in-chief of Postmedia News, spoke at the same panel. He claimed The Post has upwards of eight different kinds of labels for their various sponsored content offerings.

For his part, Berkow believes that news outlets can do one thing to mitigate the risk of misleading readers, as well as to dampen the growing alienation felt by reporters and editors -- get freelancers to write the custom content. By assigning the pieces outside the newsroom, he says, readers won't get confused when they see a story with a staff by-line.

The Post is by no means the only news outlet where staff journalists, in addition to freelancers, are expected to produce custom content. The Globe recently moved five staff reporters to their custom content division so that dedicated reporters and editors could work full time to create brand sponsored stories and sections.

News organizations are quick to defend custom content, arguing that it is editorially sound and that they have little choice but to follow where marketers are going if they hope to survive.

Indeed, unlike advertorials, another form of lucrative and controversial sponsored content that lines the pages of mainstream news publications, custom content is not written by advertisers, outright public relations firms or glorified brochure writers in the publishers' offices. Rather, it is usually overseen by and produced by journalists. Furthermore, news organizations offer assurances that brands can't dictate what is written in the stories, nor do they have oversight over who gets interviewed and quoted in them.

"It's the trend right now" says Cathrin Bradbury, executive director of content development for the Star Media Group's Content Studios. "It's what brands and advertisers want to talk about. And if you want to be a successful and viable media industry right now in very difficult times you need to be listening to the people who are sustaining you."

Last year the Toronto Star produced what they refer to as a "directed content" series on mental health sponsored by Bell Canada. Bell chose the "mental health" theme. "But that [was] the beginning and the end of the conversation with Bell Canada" says Bradbury. The Star, she added, does not ask its staff journalists to create advertiser sponsored content. Its Content Studios where ad-sponsored content is generated, is hived off from the newsroom, and its stories are assigned to freelancers or are contracted out to smaller media outlets.

Over at The Globe, coffee company Nabob currently sponsors a weekly series in the Life & Arts section on the role that coffee houses play in the cultural and social life of cities. Jill Borra, executive editor of The Globe*, insists that this content, like all of The Globe's custom content, meets their journalistic standards too and is not interfered with by the brand.

Yes, the content is crafted to fit Nabob's "preferred environment." But Nabob "doesn't read the stories, [and] do not have input into the content. Period." Readers, therefore, have nothing to be concerned about goes the argument.

A bellwether for the industry?

In fact, rather than a cause for concern, Borra thinks custom content should be looked at in a positive light. Not only is it providing needed revenue to keep newsrooms running, it also enables outlets like The Globe to engage in niche journalism they wouldn't otherwise be able to do. As evidence of this, Borra points to the Nissan-sponsored, 24-page U.S.-election primer The Globe released the day before the recent U.S. election. It was chalk full of news and analysis from The Globe's top reporters and columnists.

In the case of Nissan's sponsored U.S. election content, the possibility of a conflict seems remote and the benefits to journalism (and journalists) apparent. In the case of Berkow's Statoil piece, the conflict is more obvious and disconcerting.

The fact remains, that even when a brand does not have undue influence or input into a story, tough questions linger: Does a reporter really have freedom to report objectively when they know an advertiser has paid directly for their story? Or will they inevitably engage, perhaps unknowingly, in self-censorship?

For those like Berkow who are distressed by these questions and concerned with the overall state of the news media industry, they can count themselves in good company.

There is no longer such thing as a news 'industry' for journalists to enter, they argue. And custom content and other attempts being made by legacy news organizations to preserve the shape of their business models are futile.

The fortunes of public interest journalism, they warn, are likely to get worse before they get better.

Which raises the question. Is the increasing presence of custom content in any news publication a sign that it is figuring out how to survive, or just evidence that it is so close to death that it is cannibalizing its own credibility to buy a bit more time?

More about this in a follow-up Tyee article in the near future.