Toronto composer John Roby's wickedly funny song "Steve, It's Time to Leave" circulating online is as good an illustration as I've ever seen for why liberal democracies fund the arts.

Roby, who usually writes music for places like the Stratford Festival or Canadian films, gives a voice to more than 60 per cent of us when he croons, "In the good old day we had democracy/Now it's Steve-autocracy/With a daily dose of hypocrisy spewing from the PMO."

And this is why art matters: In the space of a day the catchy tune has had more than 1,300 hits on YouTube, prompting giggles and conversations. (I had to explain "take a walk in the snow" to an 18-year-old.)

Meanwhile, a website launched yesterday called ShitHarperDid.com has apparently gone far more viral. The site is clear, simple and devastating -- like any good punchline -- in its presentations of outrageous decisions made by Harper and his Conservative government. As the creators say in their press release sent out this morning:

"With its blunt sense of humour and four viral videos featuring young Canadians sharing their honest opinion of the prime minister, ShitHarperDid.com went viral very quickly (as reported in The Globe & Mail). Within a few hours it had received Twitter endorsements from Margaret Atwood (162,000+ followers) and Ellen Page (100,000+ followers). By 2 p.m. the site had received more than one million page views and subsequently crashed. The site was reposted quickly and received an additional 521,000 pageviews by the end of the day. (See Google Analytics here)."

Notice who put that phenomenal little social media machine together. "A network," says the release, "of young Canadian comedians, musicians, actors and designers." In other words, a fresh generation of artists.

Along with Parliament, the courts, news media, and education, the arts are part of the "open forum for discussion" that Plato first identified as necessary for any government run by citizens. So while art is usually entertaining, it isn't entertainment -- it's not a consumer product any more than education or the courts are consumer products.

The theatres and the art galleries are among the places in society in which citizens grapple with what it means to be a citizen. It's where we educate ourselves, think about everything from political issues to the human condition, challenge authority and shape our world. 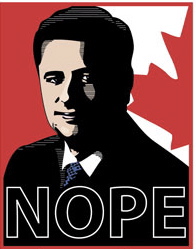 That's why we fund the arts collectively: so we can all participate. We're not subsidizing artists -- they subsidize themselves by accepting the lowest salaries in Canada -- we're subsidizing the cost of the tickets so that art is available to everyone.

Speaking of making art available to everyone, artist photographer Bob Preston of Victoria has created his own graphic commentary on Stephen Harper, changing the Obama mantra 'Hope' to 'Nope' and is making the image available for free for all to use online.

The politics of arts support

Not surprisingly, the Liberal platform includes sustained funding for culture while Harper tells us Canadians don't care about arts. Just like he insists we don't care about Parliament being prorogued, corrupt politicians, or a prime minister who lies to our faces.

I think Michael Ignatieff's party supports the arts because, as he displayed in the debate, he's the only candidate for PM who actually understands what the word democracy means. Although, it's also possible Ignatieff is smart enough to know that you should think twice about pissing-off the sort of people who write ear-worms like Roby's, "Steve, Steve it's time to leave..."