The B.C. librarians involved with the Teen Reading Club will not take no for an answer. Despite funding cuts that had the organization on the chopping block last summer, a small faction of library workers have persevered and managed to secure the basic funding needed to keep the program in operation in 2011. 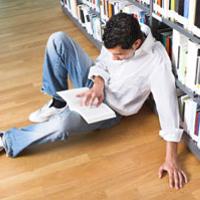 In July 2010, despite a growing membership, it looked as though the club would be forced to shut down after six years. Funding cuts to the Public Library Services Branch (PLSB) of the Ministry of Education totalled $4 million, giving them 20 per cent less to work with than the previous year's funding provided. As we reported last year, the government's fiscal priorities caused librarians involved with the program to question the province's commitment to literacy, despite the goal stated in the Liberal government's Annual Service Plan Report of "improved literacy for all British Columbians."

Despite the librarians' protests, the decreases to the budget meant the Ministry of Education simply could not find the money needed to continue, and several thousand teens would soon be looking for a new hobby.

The Teen Reading Club that exists today does not rely in any way on provincial funding. Instead, Public Library InterLINK, a team made up of members from 18 libraries located in and around the Lower Mainland, came together to find a sponsor to keep the club running in "a fashion as close to the original vision as possible." According to Michael Burris, the Executive Director of InterLINK, libraries across the province maintain a "huge commitment" to keeping the club alive.

The InterLINK cohort met last week to discuss priorities. Though they were unable to find funding that matched the almost $50,000 that fuelled the club in earlier years, InterLINK's fundraising campaign did secure a generous donation of $10,000 from the TELUS Community Board for Vancouver. This money will provide, according to Burris, "the seed funding necessary to seek collaborative ways of keeping (Teen Reading Club) a viable program." The recent meeting was held to discuss future priorities and, more than anything, how to make the $10,000 stretch as far as possible.

Katie Gove, the senior community investment manager for TELUS in Vancouver, explained that "though we were only able to provide a small amount of funding, we hope that it will have a positive impact." The TELUS Vancouver Community Board is made up of a group of 16 experts and TELUS senior executives. In 2010, they had $600,000 to put towards funding local initiatives. Approximately 300 applications came in, but only 49 were successful. Gove explained that the board tried to divide the available funds so that they can donate to many projects. Organizations can apply for grants up to $20,000, but the board can approve partial funding. This was the case with the Teen Reading Club, who applied for the maximum amount, and were given enough to cover the bare-bones costs of keeping the organization functional.

TELUS decides which programs to fund based on "which fill the highest needs in the community at that point in time" -- a testament to the importance of the Teen Reading Club. Gove noted that "literacy is at the forefront" for the TELUS Vancouver Community Board. "Reading and literacy have a huge lasting impact," she said, "it's so important for kids and teenagers to be inspired by books," and the club does just that. With the government cuts to education and arts initiatives in British Columbia, she said, programs like this "are in high need of funding."

In a time when distractions are everywhere for young readers, a club like the Teen Reading Club encourages learning, focused attention, and conversations that go deeper than 140 characters. Jacqueline van Dyk, director of the PLSB -- the branch responsible for funding the Teen Reading Club until this year -- told The Tyee that the club made it easier to reach teens. She noted that teenagers can be a "tough demographic" to interest in reading. By making reading a social activity, the club appeals to them on their own terms.

The social aspect that has made the Teen Reading Club popular with several thousand youth across the province can be seen best on the site's discussion forum. Members of the site use this area to chat about their favourite books, ask each other questions, and welcome new readers. Club members can even post their own writing and get feedback from their new friends, despite the many kilometres that may be between them.

When asked about how InterLINK would make the program work with a fifth of last year's funds, InterLINK's Michael Burris emphasized that, first and foremost, they will endeavour to keep the online component of the program alive. He and his band of wonderfully demanding librarians agree that online access "is key to (the club's) success." He also disclosed that maintaining those aspects of the program will use up the "lion's share" of the TELUS grant.

Librarians in remote locations around the province will agree with InterLINK's priorities. The club made it possible for readers in far-flung parts of B.C. to connect, and to meet peers with similar interests. While in some towns and cities, the local library might not have a large turnout for a teen book club, the Teen Reading Club's website was full of recommendations, comment threads, and book lists that interested members could take advantage of.

Though the program will stay online, the available funds don't allow for much else. While InterLINK is grateful that TELUS was able to swoop in and provide the minimum the club needed, Burris noted that it is B.C.'s "incredible teen services librarians, whose belief in Teen Reading Club and willingness to work on it above and beyond their other daily tasks" that are keeping the program operational. Individual librarians in towns and cities across the province are making the difference, providing support where the government failed to.

Since 2005, the program has encouraged book-loving teenagers from all parts of the province to not just indulge their literary inclinations, but to celebrate them. The program started in B.C., but had grown by 2010 to have a national presence. Thanks to the dedication of the librarians of InterLINK, the club will be able to continue to educate and inspire British Columbia's young readers for at least a little longer.