It was a strange sensation to check Google News on a lovely spring morning and find a new headline: "Irreversible collapse." The collapse is of a major part of the West Antarctic Ice Sheet under the steady erosion of warming sea water. Pretty dramatic, no doubt, but just another global warming story. 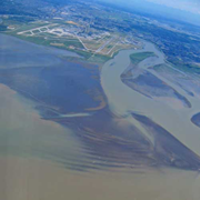 Denial as Projections Place BC Cities Under Water

Unless you'd already written the story 40 years ago.

The recent reports cite a 1978 prediction by U.S. glaciologist John H. Mercer that such an event might result from global warming. But I had been inspired by a 1964 report that argued such a surge could start an ice age.

I can still recall the moment, circa 1973, when I ran across a newspaper article on that report. According to a New Zealand scientist named A. T. Wilson, sea water periodically gets under the Antarctic ice sheets and acts like a lubricant, allowing the enormous weight of the ice to surge into the Southern Ocean. With the ocean covered by ice as far north as 55º south, sunlight would be reflected back into space and the planet would begin to cool. The ice would eventually melt, raising sea levels by some 20 metres in "100 years or much less," according to another scientist.

But the cooling would persist longer than the ice. Soon snow in the northern hemisphere would survive the summers, growing into glaciers and then into continental ice sheets.

I set to work on a science fiction thriller I titled Icequake, setting it in the distant future year of 1985. The first step was research: I found the original article by Wilson, and follow-up articles by him and others. Then I researched the history and present of the Antarctic, right down to the bearskins that the Russians used as doors in their Vostok base.

But in the 1970s, science was very different from today. We had plenty of evidence of repeated ice ages, and plenty of theories to explain them -- none very good. Human-caused global warming was an idea far out on the fringes, where Alfred Wegener's ideas about continental drift had been half a century earlier. Although the earth might be warming, then again it might be cooling.

Catastrophe as a plot gimmick

An Antarctic ice surge would certainly tend to cool it, and in a dramatic fashion. It would at least provide the MacGuffin, the plot gimmick, for an entertaining thriller.

And so it turned out: for its time, the book was reasonably accurate about the science and about living conditions in Antarctica (as a couple of people who'd been there told me). For plot purposes, and because I didn't know any better, I threw in some whoppers: solar flares that knock out radio communications worldwide (and also destroy the ozone layer with no help from chlorofluorocarbons).

Worst of all, my surge set the glaciers moving at close to the speed of B.C.'s Fraser River at Hells Gate, causing enough collapse at the edge of the ice shelves to set off tsunamis all over the world. That certainly moved the plot along too, marooning my polar explorers in their base on the Ross Ice Shelf.

Well, it was good, clean fun. Icequake sold pretty well (the sequel, Tsunami, did not), I made some money, and I wrote other novels. Meanwhile, the scientists began to find more evidence for the instability of the West Antarctic Ice Sheet: the floor of the Southern Ocean is littered with boulders scraped off the mainland, floated out to sea attached to big bergs and floes, and then dropped just like glacial erratics on the Prairies.

As well, evidence began to mount for sudden rises in sea level, just the kind A. T. Wilson had said would result from an Antarctic surge. The whole ice sheet might not collapse at once; it might be a series of surges, each raising sea levels by perhaps 15 metres.

The present reports don't go that far -- they talk about rises of three to 10 feet by the end of this century, with greater rises over the next few hundred years.

A change in scientific attitude

But in addition to new scientific findings, I detected a change in scientific attitude as well. When I was a kid at mid-century, catastrophes were for cranks like Immanuel Velikovsky. Serious scientists believed in uniformitarianism, a principle literally carved in stone by the 18th century geologist James Hutton. The routine processes we see, argued Hutton, are enough to cause change over long periods of time.

This concept was so ingrained that it actually limited what scientists could see. So they couldn't see continental drift or a mechanism to drive it. They could see a geological change when the dinosaurs vanished from the fossil record. But they couldn't imagine an asteroid crashing into Yucatan and causing mass extinctions.

John Tuzo Wilson, a Canadian geologist, showed the mechanism for continental drift in the 1960s, and in 1980 American physicist Luis Alvarez published the evidence for the asteroid that probably ended the dinosaurs. Catastrophism gradually gained a place in scientific thinking.

But those were still remote events. Events as recent as the last ice age began to look awfully sudden and awfully close. The scablands of eastern Washington state, for example, were created by periodic mega-floods when a glacial dam broke and released the water in a vast lake in a matter of hours. Then the dam would form again, the lake would grow, and the process repeated.

A similar catastrophic event may have caused the Younger Dryas, a mini-ice age that ended a warm period and brought the glaciers back. One theory argues that a freshwater sea created by melting North American glaciers suddenly burst out into the Atlantic, chilling the ocean and perhaps stalling the Gulf Stream. The worldwide mean temperature fell to -5ºC in less than a decade and didn't recover for over a thousand years.

Through the increasingly bitter controversies over global warming in the 1990s and 2000s, no one really dismissed the idea of catastrophe; the issue was whether we're in one, and if so whose fault it was. Partly for that reason, and perhaps partly out of lingering uniformitarianism, climate scientists have tended to make very conservative projections of future warming. Then those projections have been overwhelmed by events like the rapid disappearance of Arctic sea ice and now the irreversible collapse of the West Antarctic Ice Sheet.

So we are likely to see more events, bigger and sooner, than we'd expected. Weather will become more violent, and sea levels will rise higher. Climate deniers will resist the evidence just as scientists resisted the evidence for catastrophes. It won't matter; the catastrophes will come just the same.

It's not much consolation to speculate that A. T. Wilson may also have been right about the effect of ice sheet collapse -- that it will trigger another sudden cooling like the Younger Dryas. A fall to -5ºC between, say, 2020 and 2030 wouldn't help those fleeing the drowned coasts for the interior.

Sometimes I think about writing Icequake 2.0, updating my old novel. Then I forget about it. Whatever new disasters I imagined, I know I'd be out of date again -- a lot sooner than 40 years.