[Editor’s note: This story contains information related to the residential school system and intergenerational trauma. It may be triggering to some readers.]

“We’re going to name some names…”

The focus of the podcast is Kuper Island Indian Residential School, where many Indigenous children were sent — and too many never returned home to their families again.

“You’ll remember that last summer there was one school after another announcing unmarked graves and the numbers started to blur into each other,” McCue told The Tyee in an interview. “Penelakut, it was leaked, had 160 unmarked graves, at the former Kuper Island school.”

“This was a school that in its first 30 years of existence, nearly 40 percent of children died,” he says. “Death was a feature, not a bug in the system.”

McCue remembers hearing stories of the terrible conditions at the Kuper Island school from survivors during the 20 years he was a CBC reporter in Vancouver — long before residential schools and the trauma they inflicted on survivors and their families became mainstream news.

He remembers people referring to the school as “Alcatraz” because of how bad it was for the children.

And the stories of abuse — especially sexual abuse — are too numerous to count, he said. Despite the frequency of these stories and the school’s 85-year history, however, only one instructor was ever criminally charged for the abuse he perpetrated.

Many more abusers have gone unnamed and uncharged over the years, McCue said, and the survivors he spoke to were still looking for justice.

Later episodes of the podcast will feature McCue speaking with one of the Oblates of Mary Immaculate brothers accused of abusing children. And he also sits down with a head person of the sect. The Oblates of Mary Immaculate is the religious group that ran the Kuper Island school. McCue wanted to talk to both about the abuse and the harm perpetrated, as well as the responsibilities they have in repairing that harm today.

“We heard from a number of survivors and intergenerational survivors that felt it was important there was some level of accountability for what people did. And so that's why we did our best to track down some of the perpetrators and hear their perspective,” McCue told The Tyee.

Three survivors of the school — James Charlie, Raymond “Tony” Charlie and Belvie Brebber — are profiled in the podcast, sharing their personal stories. The podcast also tells the story of a child, Richard, who died at the school.

McCue and his team connected with the Charlies and Brebber, and learned of Richard’s story, through the Penelakut Elders Committee. Consulting with Elders was a way of being respectful to the community, and being trauma-informed, McCue said. The CBC team wanted to get permission to ask the hard questions they would be asking survivors and community members, and make sure the community and its leaders were okay with it.

“I didn’t want to cause any unnecessary pain to survivors in the process of making this podcast,” said McCue.

“We started with James and Tony Charlie because they wanted to share their story first and foremost, but also because they’ve done a lot of work themselves in terms of their own healing journey.”

In talking with the Charlies, and others, the name of a little boy who died at the school in 1966 kept surfacing. The team decided to tell the story of Richard, too. To make his tragic story even more known, they included the voice of his sister, Belvie, as the third survivor in the podcast.

“We wanted to go beyond the cold hard numbers of graves and really start to put a face to some of these children that died,” McCue said, of the decision to tell Richard’s story.

Penelakut was one of the first communities to ever start doing ground penetrating radar work.

In the first episode of the podcast, a former Chief of the community shares that as far back as 20 years ago, people in the community were hearing and seeing the spirits of children. The Chief tells McCue that one community member in particular, an Elder, thought the children might be trying to tell them something.

This unearthly activity started just a few years after the school closed in 1975. The site was being demolished and developed by then, says McCue in the episode.

McCue believes that most Indigenous people do not need to be told about this sad history. Many know it from first-hand experience, or through the experiences of family or friends. He and co-producer Troian are both Indigenous, so know the history themselves, too. Troian is an intergenerational survivor — her mother attended a residential school.

But he hopes Indigenous people will still benefit from hearing about Penelakut’s work in this area. 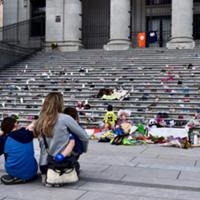 Truth and Reconciliation, A Living History

“I’m hoping that First Nations who are embarking on this difficult work now of identifying and locating unmarked graves, and doing their best to memorialize their children.... I hope that they’ll be able to hear what the community of Penelakut has experienced," he said.

"And will take some lessons from that, and also some strength.” As for non-Indigenous listeners, he hopes the podcast serves as a solid history lesson and opens their eyes to even more of the atrocities that were committed in residential schools like Kuper Island.

“It’s the whole story. You know, the schools were designed to be a war on Indigenous families.”

Episodes in the eight-part series will be released weekly starting May 17. Listen to them via CBC.