“Paradoxically, in this age of online disinformation, facts are easier to come by than ever,” Eliot Higgins tells us. He’s the CEO of Bellingcat, a kind of grassroots intelligence agency that he founded almost by accident as an unemployed college dropout, spending too much time online. His new book, just published, offers some hope that ordinary people, as well as the media, can judge events based on documented facts, not just wild assertions. What’s more, they can document those facts themselves.

As far back as the Usenet groups of the 1980s and the early websites and forums of the '90s, we’ve seen online communities form and grow. Many were toxic from the start, dominated by bullies or worse: I well recall the baffling rise of Holocaust deniers and neo-Nazis in the 1990s after scattered believers found and strengthened one another online.

“I found no place in the larger world,” Higgins tells us of his youth, “and had no prospect of ever having an impact. Instead, I took refuge in online video games, which I played with obsessive devotion, organizing large groups of players spread across various countries. But when 9/11 happened, my interests shifted. News was happening so fast, and papers were so slow. I wanted to know more, and discovered an online message board, Something Awful, that was full of argument and insight on almost any topic imaginable. I gained a new obsession: current affairs.”

The Arab Spring in 2011 was a focus for that obsession, and Higgins became active as “Brown Moses” on a Guardian blog about the Middle East. Hungry for information, he and other obsessives put social-media photos, videos and posts under forensic scrutiny — especially after the fall of Gadhafi in Libya and the outbreak of the Syrian Civil War.

For a group of armchair experts, he and his colleagues actually did develop real expertise in arcane topics like the sources of particular weapons. Strikingly, they gained that expertise from open online media: Tweets, Facebook groups and obscure databases.

By 2013, Higgins was making news, not just following it: the Guardian reported on his “weapons-spotting eye” in a story on how he had broken some important discoveries about Syria and the covert arms traffic supporting the rebels.

He and his fellow-obsessives had by now become all too familiar with what Higgins calls the “Counterfactual Community” of “dubious websites misrepresenting videos and images to win political arguments.... I had no partisan views. I was just fascinated, and I hungered for extra titbits. Plenty circulated, but plenty were false. My focus became valid information.”

Validity was in the details, even in the posts of liars. Higgins could use Google Maps and Street View to confirm or refute an event said to be in a particular location. A photo of a purported atrocity might be recycled from another time and place, as shown by a Google Image Search. More specialized apps could confirm such details as who exactly was speaking at some event.

Eventually, a hobby morphed into a small but effective group called Bellingcat (after the tale of the mice who decide to put a bell on the cat that’s been killing them — if only they can find a mouse to bell the cat). The network of amateurs remained and grew, led by a core of skilled professionals. No one had an axe to grind except to determine the facts of an event and publish those facts for the world to judge. 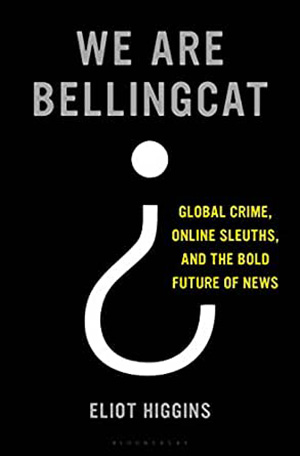 In many ways Bellingcat must be detested by intelligence agencies the world over. After all, they get most of their information from open sources too, but with vast budgets supposedly needed to obtain secrets. The Russians have dismissed Bellingcat’s findings, for good reason: Bellingcat made “Russian military intelligence” look like a contradiction in terms.

Within hours of the shooting-down of a Malaysian airliner over Ukraine in 2014, Higgins’s group identified the Russian missile unit that did the deed and published time-stamped photos of the unit’s trip through Russia to Ukraine (all taken and posted online by Russians) — and its return, minus the one Buk missile it used to bring down flight MH17.

Even more dramatically, Bellingcat nailed the Russian agents who went to Salisbury, England in 2018 to poison Sergei Skripal and his daughter with the nerve poison Novichok. It found their real names and backgrounds, including old class photos; a check of airline ticket sales also nailed the assassins’ boss, who’d flown in the day before to monitor the operation from London. Eventually, the same online search exposed numbers of other Russian agents — at untold damage to once-promising careers.

Similarly, a Bellingcat member named Aric monitored the videos posted at the Charlottesville, Virginia protests and identified long chains of neo-Nazis “on the hypothesis that protesters tend to go to rallies with friends.” When those friends brag on Facebook, they draw attention to still more friends. The effect was to discourage further public appearances, and Aric’s methods seem to be in use after the Jan. 6 Capitol riot.

Higgins and his team have spent more time with the Counterfactual Community than most of us, and they find it drenched in “ironic nihilism”: If you take any matter seriously, you become the butt of the joke — even if someone is threatening to shoot you in the face. This alone aligns the community with Jean-Paul Sartre’s definition of anti-Semites, making them the original shitposters: “They know that their remarks are frivolous, open to challenge. But they are amusing themselves, for it is their adversary who is obliged to use words seriously.... They even like to play with discourse for, by giving ridiculous reasons, they discredit the seriousness of their interlocutors.”

Higgins and Bellingcat have clearly given a lot of thought to fighting the counterfactuals, and they offer some encouraging news. Estonia, Lithuania and Latvia battle Russian trolls with volunteer “elves” who “expose the bullshit.” Finland and Sweden teach their publics about disinformation. Fact-checking projects have rapidly multiplied around the world, some with the backing of major newspapers (which are themselves adopting the techniques of open-source intelligence).

The fight can’t be purely defensive. “Crisis readiness cannot begin only when disaster hits,” Higgins says. “Prepping means awareness that manipulators seek advantage in every news event, even global catastrophes; that the Counterfactual Community churns out fresh conspiracy theories; and that extremists devour it all.”

Governments may have pooh-poohed Bellingcat, but they’ve acted on its findings: the Russians have pulled their spies’ Facebook pages, and it’s no surprise that the Myanmar military junta and the Ethiopian government have both shut down their internets at critical moments in recent weeks.

It’s a telling sign that the bad guys are on the defensive, and know it.

Bellingcat has gone beyond just checking Google Maps, but its methods aren’t trade secrets. It even offers an Online Investigation Toolkit to enable aspiring online sleuths to get into open-source investigation. 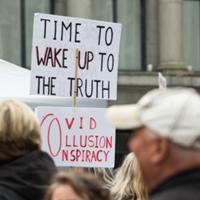 ‘One Strong Emotion Away’: Confronting Conspiracies, Our Other Viral Disease

Higgins notes that many other volunteer agencies are working to find and preserve the truth, using similar methods. Mnemonic maintains digital archives of the horrendous conflicts in Syria, Sudan and Yemen, against the day when war criminals may stand accused in The Hague. The Atlantic Council’s Digital Forensic Research Lab exposes disinformation and fake news. Forensic Architecture looks into the details of everything from individual murders and violent protests to the Beirut explosion. The Global Legal Action Network develops “innovative legal actions” against human-rights violators.

Eliot Higgins and his organization give us grounds for hope. Even individuals and small groups can track down the facts and publish them. That in turn can prod the media and government into action. Schools can use Bellingcat’s techniques and experience to teach critical thinking to young people, inoculating them against the trolls and fanatics of the Counterfactual Community.

Who knows? If we keep it up, we might save the internet, and the world.