The End of Everything (Astrophysically Speaking)
By Katie Mack
Scribner (2020)

So the end of the universe itself is something we should be culturally prepared for. Still, Katie Mack’s book can be a shock — in part because she’s a clear and lively writer in love with science. She can make the end of everything not only understandable, but often funny.

Mack is a theoretical cosmologist, applying physics as we know it to the universe as we see it — and we can see it all the way back to the Big Bang, more than 13 billion years ago, in the form of the cosmic microwave background. What we see of the universe, and how we explain it with physics, has taught us a lot in the past century. But the more we learn, the stranger the universe becomes.

Let’s get one thing clear: we’ll be safely dead when most ends of the universe arrive. We’ve understood for a long time that the sun, a middle-aged star, will eventually swell up into a red giant. It will scorch all life off the Earth and any other planets it may have appeared on, before shrinking again into a white dwarf. And that will be billions of years from now. The average life expectancy of a species is about a million years, so humanity by then will be no more than a stratum of plastic-enriched fossils maybe two centimetres thick.

Much later than that, unpleasant things could happen universe-wide. As Mack says, “For as long as we’ve known that (1) the universe started with a Big Bang and (2) it is currently expanding, the logical next question has been whether it will turn around and come back on itself, ending in a catastrophic Big Crunch.” In other words, the mass of the universe would stop expansion, and everything would fall back on itself. It will be catastrophic indeed:

“The collected radiation from stars and high-energy particle jet, when suddenly condensed and blue shifted to even higher energies by the collapse, will be so intense it will begin to ignite the surfaces of stars long before the stars themselves collide. Nuclear explosions tear through stellar atmospheres, ripping apart the stars and filling space with hot plasma.

“At this point, things are really very bad.”

But suppose the universe doesn’t collapse, but just keeps expanding. This is very likely, because since the 1990s we’ve known that expansion has actually been speeding up for the last five billion years. Something called “dark energy” keeps creating more space, carrying galaxies away from each other faster and faster. Eventually, every galaxy will be alone in its own darkness, unable even to see the light from other galaxies. “I’m not going to sugarcoat this,” Mack says. “The universe is frickin’ weird.”

At some point, all the stars burn out, black holes evaporate, and even protons decay. This is the Heat Death: “the universe is basically empty space… expanding exponentially.” Entropy, the tendency of order to become disordered, is so total that “nothing can happen”; time stops.

Theoretically, it’s possible that a new universe could appear after Heat Death as a quantum fluctuation, appearing out of nowhere just as this universe seems to have done. More likely, something much smaller — like your brain, with all its memories — might suddenly appear, “imagining that it lives in a perfectly functional world and is currently sitting in a coffee shop typing the words to the fourth chapter of a book about the end of the cosmos.”

If so, let us imagine the fifth chapter, about the Big Rip: dark energy doesn’t just separate the galaxies, it widens the gap between stars and their planets, then tears them both apart, and eventually tears molecules, atoms and subatomic particles apart. The universe becomes nothing but nothing. But this unhappy outcome should be hundreds of billions of years in the future.

A more alarming end would be vacuum decay. Mack explains how the “Higgs field,” which emerged in the first few millionths of a second after the Big Bang, “not only gives particles the ability to have mass, it also determines several of the fundamental constants of nature, like the charge of the electron, or the masses of particles.”

It’s our improbable good luck that the “Higgs vacuum” is exactly what it should be to allow the universe to exist at all. But our luck could run out: the vacuum is “metastable,” a “false vacuum” that could suddenly collapse into a lower energy state — like a rock climber losing his footing and falling a long way.

All it would take is a disturbance of some kind to create a bubble of “true vacuum,” containing utterly different physical laws, which would grow like a pebble falling downhill and triggering an avalanche. But it would happen at the speed of light. Mack offers us some consolation: “vacuum decay is extremely unlikely to happen — at least anytime in many, many, many trillions of years.” Unless it uses quantum tunnelling and ambushes us this afternoon.

The “ekpyrotic” model is even weirder: it supposes that our universe was energized into cosmic inflation — expanding across millions of light-years in a fraction of a second — by colliding with another universe that then bounced away from ours. That universe could crash back into ours, with both universes destroyed and a new one born in another Big Bang… and so on, eternally.

All these models are trying to deal with both ordinary matter and energy, and their “dark” forms, about which we know very little. In addition to providing an understandable history of modern physics and how it got here, Mack shows us how physicists are trying to learn more, sometimes by asking questions as fundamental as whether space and time themselves are real.

Whatever they eventually learn, the conclusion is likely to be that this universe will end, whether with the bang of a Big Crunch or the boing of collision with another, or the silent collapse of the Higgs vacuum — or some other finale lurking in the data. 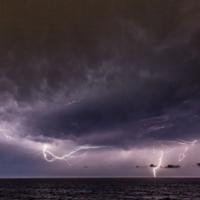 The Many Ends of Planet Earth

Physicists themselves have mixed feelings about this prospect, from sadness to hope that some multiverse somewhere else will go on (maybe with some version of ourselves), to delight in our transience: “I very much like our blip-ness,” one theorist tells Mack. “It’s the doing. It’s the process. It’s the journey. Who cares where you get to, right?

Early in her account, Katie Mack quotes the late Carl Sagan: “We are a way for the cosmos to know itself.” And she reminds us that we’re not merely stardust; the hydrogen in our bodies was mostly formed in the first nanosecond of the Big Bang, and the other elements formed much later.

Those elements combine in us and somehow acquire consciousness and curiosity, and the knowledge of our own death. If we know we must die, the universe now knows it too is mortal.