While the deadly coronavirus pandemic continues to spread across the globe, a much different wave is sweeping through our backyards almost unnoticed — one that offers much-needed inspiration and emotional relief during troubled times.

The annual northward spring migration of birds is underway, providing citizens with not just a distraction from the ho-hum of self-isolation, but an opportunity to experience one of the greatest natural wonders on Earth without even leaving the house.

“This migration — birds coming from distant countries — can open your eyes to another world, something entirely foreign,” says Rob Butler, a B.C. bird expert, author and former federal research scientist. “Most people are completely oblivious to it.”

According to the National Audubon Society, at least a billion birds migrate annually along the Pacific Flyway — a route that follows the west side of the Americas and crosses a vast range of habitats from the tropics to the Arctic.

COVID-19 — not to be confused with corvid, a family of birds that includes jays, crows and ravens — has closed restaurants and bars, recreation centers, theaters and sports stadiums. That has prompted more people to visit the outdoors.

“It’s probably a real positive thing, good for the health, and gets you to know nature better,” says Butler. “You can’t go for a beer, so go for a bird.”

The health benefits associated with nature and birding are well documented.

One study from southern England, published in the journal BioScience in 2017, revealed that “people living in neighbourhoods with higher levels of vegetation cover and afternoon bird abundances had reduced severity of depression, anxiety and stress.” It recommended that private and public landowners take steps to increase vegetation, such as tree planting and green roofs, to enhance feeding and nesting sites and to bring people into closer contact with birds.

Birders want to maintain distance between each other during the pandemic. Physical distancing rules apply equally to birding forays: stay two metres from other people, cough into your elbow or sleeve, avoid large gatherings and stay at home if you are sick. The beauty is that birding can be done alone in an environment where it is easier to avoid others. Don’t even think about carpooling to a bird destination.

Note also that a rare bird has the potential to attract birders in worrying numbers to a specific location. A recent posting by BC Rare Bird Alert regarding a rare tufted duck notes that a boardwalk and viewing tower at Piper Spit in Burnaby Lake Regional Nature Park had been closed due to the potential of crowds spreading the coronavirus.

Failure to follow the rules can only increase the chances of more parks being shut down to slow the spread of the virus. The B.C. government has already banned camping in provincial campgrounds and closed several parks outright, including Goldstream near Victoria and Stawamus Chief near Squamish.

The Vancouver Park Board has closed parking lots at several popular parks, including Kitsilano Beach, English Bay and Stanley Park.

There are plenty of resources online to help you delve further into birding. The Cornell Lab of Ornithology offers the Merlin Bird ID app, which allows you to tap into a database of millions of bird sightings around the planet. Cornell’s Bird Academy also offers online courses ranging from bird identification to field sketching.

Several species of birds such as swallows, bald eagles, turkey vultures and geese can be observed simply by looking to the sky, while others are best lured to bird feeders. The list of 25 most common birds at feeders in British Columbia includes the dark-eyed junco, the most common, and the pileated woodpecker (number 25). See how many you can check off at Project FeederWatch.

Cathy Losee is a recently retired elementary school teacher who arrived home from a Mexican holiday on March 18 and began a two-week period of self-isolation at her property on the west side of Vancouver. She immediately washed out her three hummingbird feeders and included sugar in her grocery home-delivery order. “They substituted cubes,” she says. “It was funny, jamming them into a cup to measure.” The standard ratio is one part sugar to four parts water. 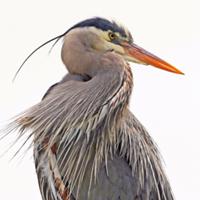 Well, at Least the Herons of Stanley Park Came Back

Bird seed is generally still available at retail outlets, although Wild Birds Unlimited on West Broadway in Vancouver has closed its doors due to the coronavirus outbreak and is not processing new online orders.

While birds continue on their northward journeys, the coronavirus has, sadly, grounded birding festivals around the province, including Wings Over the Rockies Festival scheduled for May in Invermere. Vancouver Bird Week, also in May, was set to expand throughout Metro Vancouver. The event is now postponed in hopes that it might take place during the southerly bird migration in October.

Birding won’t stop the march of COVID-19, but it offers a free and simple tonic for anyone feeling isolated and overwhelmed by global events.