A beautifully shot but somewhat strange anti-drug ad in the 1990s in Canada comes to mind any time I hear the Hollies song “He Ain’t Heavy, He’s My Brother.”

And for some reason I thought about it again while thinking about our growing addiction to life online.

The ad featured grainy footage of two boys splashing around in a lake, playing in a canoe, hanging out on a dock. It cuts to a scene of one of them, now a teen, snorting cocaine off of a mirror, then a rehab unit where he’s reunited with his pal as the Hollies’ song swells in the background. If you weren’t a bit tearful, you might be a monster.

The concluding voiceover says, “If you try to stop a friend from using drugs, you may not succeed. But at least you tried.”

Screen addiction isn’t as dangerous as drug use in this time of poisoned supplies. But research shows we’re spending a lot of time looking at our screens, and many of us have tried — and failed — to manage our use.

That’s not surprising. Some of the world’s smartest people in computer science, electronics, marketing, publishing and information technology have competed over decades to evolve our screened state-of-the-art — phones, computers, watches and the rest — into the magnum opus of designer drugs. They analyze what slight variations will keep your eyes glued to the screen for a measurable blip longer, which can mean untold riches for their employers.

Global culture has accepted and embraced the absurd state of affairs with regard to acceptable screen-time in a day. And anytime you’re tempted to venture into the real world of flesh and bones, the online industry is quick to provide an app to make that unnecessary.

Don’t worry, this isn’t another list of apps that will limit your phone time, or a cute story about a millennial who made it through a month without using one.

This is a divide-and-conquer exercise — a look at just five of the many reasons you’re so mesmerized. Understand them, and you’ve taken the first step to dealing with the strange power of the screen.

We’re programmed to respond to changes in our environment. That’s why we are transfixed by dancing flames in a fireplace, stare at an idiotic scrolling LED marquee while waiting for a bus (or did before we rendered boredom extinct with mobiles), and ignore dinner companions in restaurants in favour of the TV screens flickering behind them.

Russian scientist Ivan Pavlov, of salivating dog fame, came up with the name, and it’s been studied and confirmed. Pavlov also called it the “what is it?” reflex, reflecting our instinct to identify any change in the environment.

Any light-saturated, dynamic screen can easily grab the lizard part of your brain via this basic instinct. And any designer of devices or apps — from slot machines to those addictive phone games — has the advantage of this Pavlovian vulnerability even before they’ve begun choosing what light to beam.

But the graphical user interface, based initially on a desktop metaphor that lets users point and click and swipe to control their devices, didn’t come onto the scene in any significant way until the early 1980s. Apple co-founder Steve Jobs gets credit for pushing the approach — honed at the legendary Xerox PARC (Palo Alto Research Center) — to a broad audience with the first Mac in 1984. Bill Gates took it to the masses in an arguably worse, but better marketed form.

Instead of using endless memorized typed commands to control their computers, users pointed with a mouse, scrolled, clicked and dragged things around. The result was a virtual space we now inhabit as naturally as the world of flesh and earth and water.

It was an earth-shatteringly powerful transformation, creating a new world many of us live in for a majority of our waking hours, one that limits all possible human interaction down to a sequence of mouse or keyboard clicks.

It’s not possible to live in those new online worlds and the real world simultaneously. When you’re doing even a mundane task on a screened device, the edges of your known world quickly becomes those of the six- or 26-inch screen on your device.

The interface makes it easier to accept the premise of virtual worlds. And the longer you are engaged, the harder it seems to leave (and the less you want to go). Think of the times you’ve looked up after you finally hit save on that report you’ve worked on all afternoon and noticed for the first time that everyone has left the office. Or when you’ve looked up from your phone on a bus and realized a friend has been sitting, unnoticed, across from you.

A few decades ago, parents saw the 50-mile stares of their children at the dinner table after an afternoon of video games and set time limits or ordered them outside.

But today mom, dad and grandma are all just as likely to have spent a good portion of their waking hours in a similar virtual world. If they happen to look up from their phones to see their children at the dinner table, they will share the now normalized 50-mile stares.

And proposing to limit time spent in this world today is seen as almost impossible; it would mean limiting a child’s ability to participate in education, social life and develop a needed new form of literacy, nearly regardless of career choice.

Humans gain satisfaction from being engaged in a task so thoroughly they disappear into it. It has been called “flow” by researchers, and it used to depend on a lot of factors. You may need supplies at hand — pens, calculator, paper for your typewriter — a workspace, preparation and research, perhaps some level of challenge and novelty.

Now you can just launch your device. You can be scrolling through a social media feed before you even know why you sat down at your computer or looked at your phone. The infinite options mean you can be drawn into something akin to a flow state seemingly instantly.

And once you’ve jumped in, you never have to give up that sense of engagement. Even if you’ve forgotten your original goal, you can check your email and social media, catch up on news, and plan a trip or a date.

Switching tasks in the real world requires action. We leave a space and say goodbye to others, put away tools, deal with interruptions. The process brings a forced reset: “I have finished my task and there are no more things to do here. What will I do next?” We’ve lost that useful break.

Today, everything can take place in that space that contains all of the elements that allow you to frame your activities as “work” — the desktop.

But that also allows you to forget why you sat down in the first place after hours of diving down a Google wormhole. You’re busy, you feel engaged. But later you’re unlikely to describe the hours as quite as satisfying as time spent working toward a focused, thoughtful goal.

For me, that’s when the guilt and pledges to cut down start to set in.

Now our internet-connected screens have become everything-in-one machines. The inventions we once dreamed about in science fiction have become real, and brought an unexpected loss of richness of experience.

Think of the aesthetic experience of the now almost-extinct video store. The smell of popcorn, rows of shelves, staff picks and conversations with other customers about good choices.

Or something even more banal, such as banking. Lining up behind a velvet rope, filling out deposit slips with pens on slender chains, impressive safes, even selecting the design for cheques. All those required interactions and your presence.

You likely won’t miss banks or video stores. But as the number of tasks you would logically choose to perform in the world of flesh and blood shrinks daily, and real human interaction is replaced by clicks and key presses, it’s time to consider what is being lost.

Which brings us to the question of why it is so hard to continue doing something the old way.

5. The cult of efficiency

Out of principle, I tried really hard to write this story on a typewriter I recently bought. Using it is a wonderful, tactile, distraction-less experience. I remain present in the room, instead of being drawn into an electronic universe. The sheets of paper I roll into the machine are real; the light casts real shadows across them. And it’s completely clear what I’m sitting down to do with this single-purpose device.

But something nags at me. (And not just the fact that a secretary who used the machine when it was new almost a century ago could type 120 words a minute while smoking.) Unlike this secretary, I know of a faster alternative, and it’s killing me to have to retype an entire page to move a paragraph.

And I’m painfully aware most people would regard me as a fool who doesn’t value his time, and a poor employee given my slow pace and the extra work an editor is going to face.

But there is reason to think we can move beyond this cult of efficiency — if we change society’s values together. Environmental awareness, for example, has led us to go back to doing some activities the old (less efficient) way. Hanging clothes out to dry — which you already knew made them feel and smell better — doesn’t feel backward. Instead you feel like a responsible, educated human. Call it analog awareness?

What do we do? 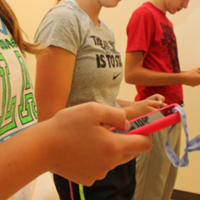 Ban Cellphones in Class? Good Luck with That

We’ve all heard complaints for years about our constantly increasing screen time, yet here we are.

If the world pales in comparison to the lure of screens, perhaps the answer is to make the world around us more compelling.

What kind of cities, homes and workplaces would be so engaging, positive and useful that we would choose to spend more time in them, rather than in front of our screens?

What would they need to look like if they were to be so compelling that screen time left us afraid we were missing something, instead of the fear of missing out we now experience when we leave our phones at home?

Instead of fretting about the lure of life online, what about considering whether car-dominated, crowded, noisy, polluted and isolating cities are what make the instantaneous virtual ones so appealing?

What are your ideas? Share them in the comments below. (And yes, the irony is not lost on us.)