Otter fever has hit Vancouver. A rascal river otter snuck into the Dr. Sun Yat-Sen Park a week ago and is devouring its way through a buffet of koi fish in the classical Chinese garden in historic Chinatown. Park authorities have been trying to trap the otter so far with no success. As nature plays out the natural predator-prey relationship in the man-made garden, Vancouverites are finding humour in the situation and asking each other: Are you #TeamOtter or #TeamKoi?

A quick scan of abundant unscientific online polls shows most Vancouverites are #TeamOtter, rooting their hero won’t get caught by the pesky humans. Supporters call the otter a “badass.” They’ve given it a Twitter account and a name — Otter von Bismark, after Germany’s famous “Iron Chancellor” of the 19th century.

It's Day 8 of the Chinatown Otter Watch. Where do your allegiances lie? #OtterWatch2018 https://t.co/fWlWa4So5o

I, on the other hand, have been firmly #TeamKoi since day one. I am rooting for the helpless carp not because I am an ichthyophis, a fish lover, as Vancouver Sun wrongly hypothesized. I am on #TeamKoi because the koi and their presence in Chinatown matter deeply to many cultures, and so, to me. The oldest koi at the garden is more than 50 years old, longer than I have been alive. It pains me to hear daily reports of their deaths, knowing that most of the city is rooting for their predator, not them. Knowing, too, that I may have met some of them when I was a young child.

The unique Dr. Sun Yat-Sen garden, designed by the late architect Joe Wai and completed in 1986, is a must-visit park to experience Chinese heritage and culture. As a child, I would run through the garden’s bamboo forest, skip over the stone bridges, and admire the decorative koi swimming in the pond, weaving through the lily pads inches away from my feet. I would not visit China until I was in my late teens. As a kid, the Chinese garden was my little cultural oasis where I was able to experience a Ming Dynasty Suzhou scholar’s refuge without leaving Vancouver. No other Chinatown in Canada has a similar Suzhou garden that pays homage to its cultural roots, while being a place of respite for its citizens from the hustle of the city. 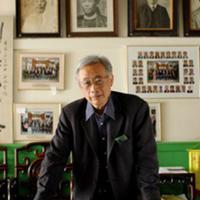 Gratitude for Joe Wai, Architect and Lover of Civic Life

Nothing coy about them

There is a famous Chinese proverb: “In heaven, there is paradise. On earth, Suzhou and Hangzhou.” Suzhou scholars’ gardens with their koi are legendary. When Marco Polo visited China in the 1200s, he called Suzhou “Venice of the East” in part because of its gardens. During my last trip to China when I was on a train from Shanghai to Beijing, I met an entire class of college students studying landscape design that travelled across the country just to study the famous gardens. It is no wonder that Suzhou gardens are a favourite subject of Chinese brush painter, and the koi within the garden ponds are even more so.

Koi have deep history and symbolism within the Chinese culture. The majestic carp symbolizes good fortune, prosperity, perseverance, and longevity, not coyness. During Chinese New Year, you might notice rice cakes molded to look like koi available for sale. Family and friends would exchange the new year greeting 年年有餘 (“neen neen yow yu” in Cantonese; “nian nian you yu” in Mandarin), where the last word 餘 “yu” sounds like the word for fish 魚, usually symbolized by koi. The greeting loosely translates to: “May you have abundance year after year.” In some dim sum restaurants, you can order mango pudding shaped like koi to finish off your meal with sweetness and good fortune.

Koi are also interwoven within Chinese mythology and idioms. One idiom is 鯉魚跳龍門 (“lei yu tew loong moon” in Cantonese; “li yu tiao long men” in Mandarin”), which translates to: “The koi jumps through the dragon gate.” The idiom is from a myth of koi that swam upstream through obstacles in the Yellow River. One koi eventually reached a dragon gate on top of a waterfall and turned into a dragon. The lesson — for students studying or anyone working towards a difficult goal — is that you will eventually find success if you endure. This is the fable that made koi a symbol of perseverance.

To some, the koi may not hold any significance other than being creatures unnaturally kept for decoration and human pleasure. To me, the koi in the Dr. Sun Yat-Sen garden symbolize the heritage and culture of the resilient Chinatown neighbourhood where they are located. The koi are not foreign, but at home, where they belong.