A professor of English at the City University of New York would not seem to be the most reliable authority to discuss the interconnection of climate change, cities and class warfare. Yet Ashley Dawson has made himself such an authority. In his basic argument, he’s very persuasive: great cities are both the chief instigators of climate change, and their greatest victims. In his suggested solution, he is much less so.

Dawson’s argument is simple: the world’s “megacities” burn fossil fuels to drive the global economy, drawing hundreds of millions of people from the countryside to the slums to find work. But the more the economies prosper, the poorer the slum dwellers become, the more the climate deteriorates, and the more the poor suffer as a result of monster storms and floods — and rebuilding that favours the rich.

To make his case, Dawson focuses on New York City, with passing references to other coastal megacities like Jakarta and Shanghai. These are “extreme cities,” where scores of millions are packed in, trying to make a living by means that will destroy the cities themselves.

“Thirteen of the world’s twenty largest cities are port cities,” Dawson writes. “But this has generated a deadly contradiction that is one of the most overlooked facts of the twenty-first century: the majority of the world’s megacities are in coastal zones threatened by sea level rise. Today, more than 50 percent of the world population lives within 120 miles of the sea; by 2025, it is estimated that this figure will reach 75 percent.”

Climate change is making such cities uninhabitable. Jakarta’s millions get their water by pumping it out of the ground beneath them, making the land subside until floods sweep in routinely. Miami is doing something similar. Meanwhile, three years of drought are about make Cape Town run out of water sometime this spring — a Day Zero for four million people.

Dawson argues that growing cities shunt their workers — especially their minorities — into ugly corners, where they’re exposed to industrial pollution and bad sanitation, and receive few or no social services. When a disaster — like Hurricanes Katrina or Sandy — comes along, the poor lose what little they have. The more affluent get government funding to “build back better.”

Governments like New York City’s are perfectly aware of climate change and its implications. They’ve developed plans for “greening” their cities, even building barriers against the rising sea with parks and bike trails on top. But the barriers go up to protect lower Manhattan, and when money does reach poor shoreline neighbourhoods, it’s only to gentrify them. Once protected, such neighbourhoods attract affluent bargain-hunters looking for relatively cheap housing and business space. By crowding in, however, they only expose themselves to the next storm surge. The poor people they displaced are now somewhere else, still more exposed.

This top-down response ensures that the rich and upper middle classes will be reasonably well protected for the time being; they will congratulate themselves on being “green” and “resilient” and can look forward to rebuilding with government help when their new boutiques and condos are flooded out — again and again.

A familiar scenario for Vancouverites

Big coastal cities once had good reasons to exist: they were both manufacturing centres and shipping hubs. When New York was a city of sweatshops, workers had to live fairly close by. But such cities were gradually hollowed out as manufacturers migrated to cheaper labour — first to smaller cities and towns in the South, then overseas. The big cities turned to “FIRE”— finance, insurance and real estate — to sustain their economies. Workers, and especially minority workers, were effectively abandoned in inner city slums or public housing projects on the outskirts.

Vancouverites are all too familiar with this scenario, and while we’re nowhere near as big as Shanghai or Los Angeles, we face similar economic, political and environmental problems.

Dawson makes a persuasive case for a kind of big-city class warfare fuelled by “fossil capitalism,” with the working class generally on the losing side. He is less persuasive in arguing for “disaster communism” as the secret weapon for a counterattack.

As a play on Naomi Klein’s “disaster capitalism,” it’s a witty term, and describes a real response to disaster. Fort McMurray had its communist moment in the big 2016 fire: those who could were glad to help those who couldn’t. Some Puerto Rican communities after Hurricane Maria are doing something similar to rebuild their power systems.

Dawson says disaster communism rescued outlying New York communities battered by Hurricane Sandy in 2012 while the authorities were busy looking after more prosperous neighbourhoods. Veterans of the Occupy Wall Street movement seized the opportunity to get out into the housing projects and decayed neighbourhoods, and to canvass residents on what they needed. Using social media, Occupy Sandy formed an effective communications network and mobilized resources the people needed — including setting up a free medical clinic.

It worked, and municipal, state and federal authorities implied as much by continuing to focus on their preferred communities, leaving the Occupy Sandy teams to do the heavy lifting among the poor and people of colour. But within months Occupy Sandy was little more than a voluntary social agency, taking pressure off governments just as food banks do.

New York, unlike most coastal megacities, had a nucleus of volunteer radicals. Suppose a typhoon drowned Jakarta; any grassroots “Occupy Jakarta” relief effort would likely trigger the mass murder of its workers by the Indonesian army, which led the killing of hundreds of thousands of “communists” in 1965. China would be equally hostile to a non-Communist Party grassroots recovery effort if a storm surge crippled Shanghai.

Still, climate change can indeed lead to regime change. Over a thousand years ago, several American civilizations imploded. A minor climate change caused serious drought. The Mayan kingdoms collapsed, and so did the Anasazi of the U.S. Southwest. Those cultures’ elites had held power by promising to bring rain when it was needed. When the rain didn’t come and crops died, Maya and Anasazi farmers overthrew their elites. It must have been ugly.

But the farmers didn’t simply take over their governments; they walked away from urban civilization, back to self-sufficient small villages. Life was still tough, but they survived.

An offer they can’t refuse

That option seems impossible today: we have too many people, and too few of them are farmers. We have to stay urban and high-tech, or die by the billions. 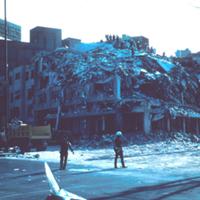 Is It Time to Move Our Cities?

The communism of the twentieth century was another kind of disaster because it was premised on the disposability of whole classes of skilled people. It was like taking over a dairy farm and killing the cows because you want to raise chickens.

The disaster governments of this century should know better. Rather than slaughter the one per cent and their servants, they will hire them.

“You’re really good at generating wealth in new ways,” those governments will say. “Now take all the smart people you’ve gathered to run Amazon and SpaceX and Google and Apple, and put them to work designing a new economy that can slow climate change and give everyone a reasonable living. Say, $100,000 a year, including yourselves.”

And if they refuse?

It will be an offer they can’t refuse, unless they prefer to join the lost kings of the Maya.