Another year: another Star Wars.

What can you say about the damn thing that hasn’t been said about a million times already?

The fan boys are busily chewing holes in the carpet over the latest iteration, running down the film’s Rotten Tomatoes score, writing petitions, and marching up and down the interwebs, tootling and farting their frustration.

The critics, meanwhile, united in their positive consensus over the film, throw down disdain from their ink-stained perches.

I’m not exactly sure what all the fuss is about, and really, I don’t care.

Stars Wars: The Last Jedi entered theatres this month and has been pulling in the punters, who apparently aren’t too upset with director Rian Johnson’s creative decisions.

Striking the right balance between new ideas (the rise of women, the end of old white men, and a new universe of togetherness) with the same old stuff (explosions, good guys, bad guys, metal guys, fleshy things with noses where their ears should be) is a delicate art. And to be fair, the film hits the sweet spot between mono-mythic hoo-haw, old fashioned space western, and a new age of intersectionality.

It is also the tale of three generations — Boomers, Generation X and Millennials — that incorporates aspects of all three groups, and in so doing forges a new take on an old story.

In the beginning, the original trilogy of Luke, Leia, and Han were ranged against Darth Vader and his army of storm troopers. Thin white colonialists with crisp British accents ruled the universe. Everyone was apparently related to everyone else, while whitey was firmly in control and eager to squash the rebel uprising, like the Empires of old.

In subsequent chapters, as the Star Wars universe proliferated, and things got a bit more expansive, other elements popped in, but nothing reset the clock like The Force Awakens in 2015, when J.J. Abrams brought in the next generation and effectively passed the torch.

This latest version blithely picks up where things left off in The Force Awakens. Young Rey (Daisy Ridley) has gone off to a mysterious island in search of Luke Skywalker (Mark Hamill). Leia (Carrie Fisher) is firmly in command of the rebel forces. Runaway storm trooper Finn (John Boyega) is recovering in a cryo-tube, and emo Kylo Ren (Adam Driver) is nursing his injuries, both internal and external.

So, now that we’re all caught up, what’s next? Well, more of the same, actually.

The First Order is preparing to blast the rebel base to mince pie. The rag-taggy group of fighters are fleeing for the stars, and the only thing standing in the way of their complete and total annihilation is a bunch of X-Wing pilots, led by the super scrappy Poe Dameron (Oscar Isaac).

The ensuing space battle is suitably operatic and sets the tone for the rest of the film, one part repartee, to two parts shoot-the-shit out of everything. Nothing like heavy casualties to gladden the heart, but the film’s opening sequence is light on its feet, and positively zippy with speed and bravura entrances and exits.

Meanwhile, back on the hunk of rock where Luke has come to glower and sulk, a different battle is unfolding. Erstwhile pupil Rey needs a Jedi Master to learn her the ways of the force, but Luke, old and cranky and fed up with religious Jedi bullshit, wants nothing more to do with the stuff.

In yet a third narrative, Kylo Ren has failed his master, Lord Giant Penis-Head, also called Snoke (Andy Serkis), and is suffering the usual growing pains of evil aspirants. Kylo’s granddaddy issues have gotten in the way in his quest for power. Furthermore he is being undermined at work by ginger kiss-up named General Hux (Domhnall Gleeson).

So, all in all it’s a complicated old picture. To its credit, the film juggles the multiple narrative skeins with ease, only occasionally tangling into a Gordian knot in the centre of the universe.

As Rey learns the ways of the Jedi under the ambivalent tutelage of Old Man Skywalker, Kylo Ren is also learning new stuff, like why he and Rey are invisibly bonded through time and space. I will give you three guesses but you will get it on the first try. It’s about time there was more sex in the stars, and Kylo is everyone’s mean space boyfriend, a creamy dreamy man in a mask, with a light sabre and impulse control issues. There is even a spot of nudity. MMMM……cool whip.

As Rey and Kylo circle around each other in their minds, warily at first, and then a bit more heatedly, a new element enters the picture. It is a different kind of conflict, but as old as time itself. Driver gives a particularly visceral performance, wet-lipped, and trembling, you can almost smell the testosterone armpit funk rolling off the man. He is met and matched by Rey, a tough-minded young woman, with ethics aplenty and a chip on her shoulder, comprised of poverty, and abandonment issues.

I smell a space crush happening, even though the pair is effectively on opposite sides of the Manichean universe. Dark meets light, good meets evil, and then they have sex everywhere. Alas! We are not quite there yet. Although, in fan fiction universes, I can well imagine the purplish prose spilling forth.

But back to the actual universe for a moment, as the rebels attempt to flee the long arm of the First Order, their only hope, is to shut down the tracking device, and for that they need a master code-breaker. All of which sets the stage for extended sequences involving lots of near-escapes, courageous sacrifice, and a few startling reveals. If all of this stuff seems rather familiar, it’s because it is, but that doesn’t necessarily detract from the enjoyment factor.

The film is brimming with pleasures, both great and small, silly jokes, sly asides and grand gestures, and yes, nobility.

Johnson has a fluid way with battles scenes, ample with balletic movement, that give rise to a kind of violent poetry. Spacecraft, skim over the surface of a planet, kicking up blood red-paths in their wake. So, too, the crackling dance of combat, humming with the blue-white fire of light sabres, is keenly drafted, crisp, and effective.

There are also a few moments of genuine pathos, especially with Leia (played by the late great Carrie Fisher).

But here is where fan umbrage seems to be most concentrated. Women occupy the roles of power in the rebellion, against a largely male enemy, and there is a distinct shift away from the old guard. But the most radical aspects of the film slip in sideways, including a critique of war profiteering, greed, and capitalism itself. Perhaps, Rian Johnson is practicing a few Jedi mind tricks of his own, sneaking in a more radical undertone, under the very noses of his audience.

But the thing that makes the film most interesting is its function as a bridge between two paradigms, really two distinct generations, Boomers and Millennials. In this, I would argue that The Last Jedi is a quintessential Gen X film, sporting the snarky humour, self-deprecation, and certain ironic position that marks the population.

Vanity Fair recently featured an article that trumpeted the notion that Gen X folk, born between the early-1960s and the early 1980s, would be the generation to save us. I’m not so sure about this, but they have certainly done a great deal to knit together the Lucas universe (monomythic and obsessed with daddy) to the new more diverse and inclusive star system. Both Rian Johnson (b. 1973), and J.J. Abrams (b. 1966) have brought their particular (generational) sensibilities to bear, in revamping the series, and creating a path forward. 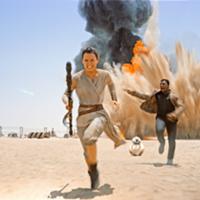 Everyone Has Their Own 'Star Wars'

As a proud member of Generation X, I have had the privilege of seeing all eight films in the series in actual movie theatres, starting with the very first chapter.

In 1977, my parents took me and my brothers and sister to see the movie, and in 2017, I take my son, and the thing goes on and on. Will it ever end? Maybe, but probably not in mine or your lifetime. And this is just fine. The idea that your kid’s kids may someday troop off to see more Star Wars on whatever future cinematic technology waits in the wings is strangely heartening.

Or, maybe they will sit around the campfire, in the ruins of a post-industrial world and tell tales of Luke, Leia, Darth, Rey, Kylo and Lord Giant Penis-head, and remember a time when people watched pictures made of light and dark.

Either way, may the force be with us all.

Dear readers and commenters: You may notice that comments are not enabled for this story. In what has become a Tyee tradition, we're closing the commenting system for the holidays. Thanks for all the insightful, informative comments in 2017. We look forward to more of the same in 2018.