Not many people remember Sinclair Lewis today, but in the 1920s and 30s he was one of the greatest American writers. In novels like Main Street, Babbitt, Dodsworth, and Arrowsmith, he examined small-town white Americans and made them shudder with embarrassment about themselves. He knew them too well -- their pettiness, their conformity, and the bullying that betrayed their authoritarian streak. 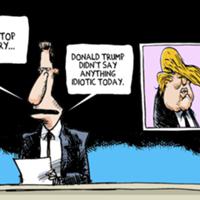 Donald Trump Versus... Wait, Bernie Who?

Lewis, if he were still alive, would not be surprised to see someone like Donald Trump running for president. The 1920s and 30s were rich in frauds and flimflam men offering quick cures for social ills -- using new media like radio and movies to peddle their ideas and win followers. Especially during the Depression, extreme ideologies and demagogues competed for support: communism, fascism, Social Credit, fundamentalist Christianity. Out of that clamour, Sinclair Lewis wrote a satire about his own times that has turned out to be prophetic for ours, 80 years later.

In the fall of 1935, five years after receiving the Nobel Prize for literature, Lewis published It Can't Happen Here, a novel that got a rave review from the New York Times. It was promptly converted into a stage play with Lewis himself playing the protagonist, an aging newspaper editor in the small town of Fort Beulah, Vermont. The play got great reviews, too.

It Can't Happen Here describes a democratically elected fascist takeover of the United States in 1936. Lewis describes how the incumbent Franklin Delano Roosevelt is rejected by the Democratic Party in favour of Senator Berzelius "Buzz" Windrip. FDR has to run as a third-party candidate against the demagogic Windrip and a reasonable Republican.

But Windrip wins by taking positions both left and right. He promises everyone $5,000 a year ($85,000 in today's dollars) and says he'll drive the Jewish bankers out of power and replace them with a Federal Central Bank setting all finance policy. Labour unions will be "Bureaus of the Government."

Freedom of religion will apply to everyone, "provided, however, that no atheist, agnostic, believer in Black Magic, nor any Jew... shall be permitted to hold any public office or to practice as a teacher, professor, lawyer, judge, or as a physician, except in the category of Obstetrics." He exploits the religious leaders of the day, and by early 1937 he's plunged the U.S. into a nightmare.

To win control of Congress, Windrip simply arrests hostile senators and representatives, and drives several Supreme Court justices into retirement. Countless journalists are put in jail, and the rest are intimidated. Jews are driven out of their jobs in universities (Einstein, recently arrived from Germany, must flee again).

To enforce his decrees, Windrip creates the Minute Men, recruited from both local thugs and middle-class opportunists, who start rounding up critics and putting them in concentration camps -- or just shooting them.

Sinclair Lewis's protagonist, the editor Doremus Jessup, is a backwoods intellectual who can't take Windrip and the Minute Men seriously -- even when his obnoxious hired man becomes a Minute Man.

But as events worsen he publishes an editorial against the new regime. That leads to a takeover of his paper, with Doremus reduced to writing bland stories while the Minute Men rampage through his town. After his doctor son-in-law is shot dead for opposing Windrip, Doremus attempts an escape to Canada with his family -- only to find all roads sealed off.

Before long Doremus and his family and friends are in the New Underground, an amateur Resistance led from Canada by the exiled Republican presidential candidate. That in turn leads to his arrest and consignment to torture in a nearby girls' school converted into a concentration camp. Eventually he does escape to Canada, and finds thousands of other exiles have arrived before him:

"The Canadians, however attentive and generous hosts they might be, were actively sick of pumping up new sympathy. They felt that their quota of martyrs was completely filled, and as to the exiles who came in penniless, and that was a majority of them, the Canadians became distinctly weary of depriving their own families on behalf of unknown refugees, and they couldn't even keep up forever a gratification in the presence of celebrated authors, politicians, scientists, when they became as common as mosquitoes... And reports said that Mexico and London and France were growing alike apologetically bored."

Doremus Jessup gets bored too, and the novel ends with him back in the U.S. in the summer of 1939 as a 60-something secret agent for the New Underground. The American fascists are fighting both a war against Mexico and a civil war against local insurgents.

As an alternate history, It Can't Happen Here still works well. The satire is broad, but real suspense builds as events get uglier. I'd forgotten the plot since I first read it decades ago, and I was again worried about the characters' fates. The jerks and psychopaths in the Minute Men were recognizable American types long before the 1930s, and contemporary readers must have shivered to see Lewis's portrait of their neighbours.

Minute Men still with us

We in turn find the authoritarian descendants of those jerks and psychopaths in the self-styled militiamen who took over the Malheur wildlife refuge in Oregon a couple of months ago -- not to mention in the vast Dark America that reveals itself in the online world.

What Lewis doesn't mention is that the American Founding Fathers saw them coming as well. They were the educated elite of the British colonies, familiar with the politics of ancient Rome and contemporary Europe. To build the biggest republic since the assassination of Julius Caesar, they had to thwart the crooks and adventurers they knew would try to overthrow it.

Precisely because of their cynical view of human nature, the founding fathers designed a system of checks and balances that would make their new republic damn near ungovernable. If the jerks and psychopaths took over Congress, a wiser president and judiciary would thwart them. If an aspiring king became president, Congress and the the Supreme Court would cut him down to size. If the Supreme Court thwarted Congress and the president, they could respond with constitutional amendments.

It was an impossible arrangement, but it has become the basis of almost two and a half centuries of (more or less) legitimate transfer of power from one government to the next. Few other governments can claim such longevity. But longevity is not immortality, and since the election of George W. Bush the system seems to be breaking down.

It's a cliché in science fiction that anyone can predict the automobile. The trick is to predict traffic jams and road rage. Sinclair Lewis saw Donald Trump coming, and so did Thomas Jefferson and Ben Franklin. Create a paradise, and every serpent sees a job opportunity.

Eighty years after the fictional Buzz Windrip, the Americans (even worse educated now than Sinclair Lewis saw them in 1935) could actually elect a real Windrip. In the novel, Windrip's crooked staffers soon drive him into exile in Europe while they turn violently on one another. But it's also clear that a return to a democratic America is years away, if not lost for good.

After first speculating on the impossibility of his ever getting the Republican nomination, the U.S. media now talk about how unelectable he would be. By September or October they may be facing the likelihood of a President Trump, at which point murmurs of insurrection and military coups will grow louder. It does seem hard to imagine a Trump administration surviving much longer than Lewis's Buzz Windrip. The system, however battered, simply wouldn't tolerate him.

Eventually, a post-Trump U.S. would pull itself back together. But it wouldn't be the same. And after absorbing a flood of American refugees in 2017, neither would Canada.