The race riots of September 1907 have been Vancouver's embarrassing little incident for over a century. Most of us know very little about them, and still less about the consequences -- which, Julie Gilmour shows us, were immense and persist to this day. 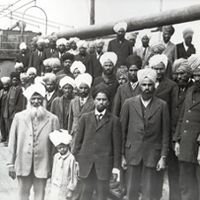 But it was an uneasy city. Vancouver suffered recurring booms and busts, and British Columbia's resource extraction industries relied on also extracting the most work for the least pay possible. Workers understood this and resented it. They were determined to do better in their new life.

So were the Chinese who had settled in Vancouver after building the railway, and the Japanese who arrived from Hawaii and the continental U.S. And so were the Punjabi Sikhs (always mistakenly called "Hindoos") who as subjects of the British Crown thought they had the right of free travel within the British Empire.

Like the rest of the advanced nations, even educated Canadians accepted racism as we accept plate tectonics or cosmic rays, as just another fact of nature. The best scholars in the best universities promoted the idea that Europeans (at least northern Europeans like the Anglo-Saxons) were superior to all other races. What's more, the superiors thought they deserved to rule their inferiors, and they did -- with breathtaking confidence as well as arrogance.

White Canadians tolerated some non-whites more than others. The Chinese, Gilmour says, got along largely because they stuck to stereotypical jobs like unskilled labour, domestic service, and doing laundry.

The Japanese were another story. They were aggressive and enterprising, and quite ready to compete successfully with whites in fields like fishing and farming.

Worse yet, the ruling classes were suspicious of the Japanese as well. Japan's rise from hermit kingdom to industrial military power had been swift and uncomfortably like that of earlier European empires. In short order Japan had beaten China, annexed Korea, and then, shockingly, defeated the Russian Empire. Who would be next?

Worried about Germany, Britain had signed a treaty of alliance with Japan. In any future war, the Japanese would deal with Germany in the Pacific while Britain focused on the Atlantic. Canada was of course obliged to respect that treaty and treat Japan as a Canadian ally too.

On the ground in 1907 Vancouver, that was a tough sell. The whole West Coast was a hotbed of anti-Asian feeling, and many communities had branches of the Asiatic Exclusion League agitating for an end to further immigration. The League was composed largely of unionized workingmen who wanted an end to non-white immigration. A job in Robert Dunsmuir's Nanaimo coal mines might be awful, but it was a job -- usually held by a low-paid Chinese.

So on Labour Day 1907, the League marched on City Hall, then at Hastings and "Westminster Avenue" -- today's Main Street. Among the speakers was an American from the Seattle branch of the League, A. E. Fowler. In his speech to the huge crowd, Fowler evidently instigated the attack on nearby Chinatown.

"The crowd was wrecking all that was movable and breakable in Chinatown," one observer later wrote. The Chinese shop owners and their families stayed in the back of their stores, offering little resistance. They had seen this coming, Gilmour says, and decided to take the moral high ground of non-resistance.

Not so the Japanese, where the mob turned next. Marching onto Powell Street, the rioters ran into a barrage of broken bottles hurled from rooftops, followed by a counterattack of Japanese residents armed with knives, stones, and bricks.

That was that. The crowd retreated and dispersed, though follow-up incidents lasted for several days -- including the attempted arson of the Japanese neighbourhood's school.

This was not an easy job. B.C. in those days was the problem child of the new Dominion; if Laurier cracked down on anti-Asian sentiment, the Liberals would lose their B.C. seats in the next election. Worse yet, B.C. might just decide to secede, or ask to be annexed by the equally anti-Asian U.S.

As bizarre as those scenarios sound to us now, the Americans' view was even stranger. Teddy Roosevelt was in the White House. He didn't want Asians in the U.S. -- he believed one scholar's view that the world should be divided into "racial zones." But he didn't want to provoke a war with Japan that he thought could break out at any minute. That was one reason why he'd sent the Great White Fleet on a round-the-world cruise, to show Japan that America was a force to contend with.

Ottawa was equally scared of Japan, and government memos fantasized about invading armies taking over B.C. and holding the Rocky Mountain passes for a century. The Yellow Peril in 1907 was as grim a prospect as the Islamic State in 2015.

Laurier called on a young deputy minister named William Lyon Mackenzie King to clean up the mess. It was a momentous choice.

At the time King was a brisk, Harvard-trained young technocrat rising through the civil service. In Vancouver he sorted out the damage claims of Japanese residents to everyone's satisfaction. He would later do the same for the Chinese, who lacked the clout of a homeland with a real navy. But he noted that one Chinese business claiming damages was an opium factory.

Laurier then sent King on a round-the-world tour to deal with the problems of Asian immigration from India, China and Japan. The journey was the making of Mackenzie King, and shaped Canada both domestically and internationally for decades to come.

First King went to London to find a solution to the Indian immigration problem. It was a tricky one requiring a tricky solution. He found it, a legal pretext for keeping South Asians out of B.C.

Supposedly it was a humanitarian pretext: the tropical Indians, poor dears, couldn't survive the cold Canadian winters. A British official pointed out to him that the Punjabis were quite familiar with cold weather, but King talked his way past that objection.

He went on to similar successes in China and Japan -- including a stint as delegate to a Shanghai conference on suppressing the opium trade. This was also tricky, since Britain was still making a fortune pushing dope to the Chinese, while Canada saw opium as a serious social problem. King had to please both.

While in Britain King had made priceless connections with the ruling class, including the young Winston Churchill. We see the Edwardian elite as so many quaint characters out of Downton Abbey; at the time, they were the masters of the universe, and determined to remain so. In Asia he met other elites worth respecting. His racism was directed mostly against the lower classes wanting to emigrate to Canada.

King's success in resolving the issues of the riot and immigration made him the Dominion's golden boy. Back in Ottawa he took a seat in Parliament and proposed an Opium Law. It was passed unanimously within weeks, and we've lived with the consequences for over a century.

Riding the wave of a stupid riot in a remote coastal city, Mackenzie King made himself Canada's "indispensable man," elected not only to Parliament but eventually to long terms as prime minister. His strange private life, including seances where he sought his dead mother's advice, was hidden until long after his death.

The virtues of compromise

But the Vancouver riot and the world tour had taught him the virtues of reasonable compromise and negotiation with political adversaries. They would be Canada's virtues for another half-century.

It's all a long time ago. He was a brilliant young man who made his way up into the ruling class of a global empire that was already on its way down. If Mackenzie King could revisit Vancouver today, he would likely be appalled by Aberdeen Mall, Punjabi Market, and Insite, not to mention cops with Chinese ancestry and all the exposed female flesh (he was a serious prude).

The empire is gone, even Empire Stadium. But Mackenzie King, empire's servant, shaped this country as no one since ever could, not even Pierre Trudeau and his Charter or Stephen Harper and his slow coup on behalf of the oil companies. Like him or not, we live in King's Canada.

If you seek his monument, stand on the corner of Hastings and Main where the 1907 riot started, and look around you.