One night in March, Inuk singer-songwriter Willie Thrasher briefly left the downtown club where he was the opening act and walked near Vancouver's Hastings and Main Streets -- a stroll that brought back some painful memories. 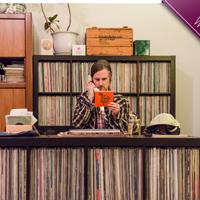 After returning to the music venue, Thrasher said he had decided go "down to the skids" because that's where his brother George spent his last days. Thrasher recalled how about two decades ago he walked into a Downtown Eastside bar and found his older sibling. They hadn't seen each other in 25 years.

"He was a big Eskimo guy. I went up to him and said: 'What's your name?' He said: 'George.' I said: 'Holy smoke.' But my brother couldn't cry because his eyes were dry. He couldn't cry anymore." Thrasher said his brother, a respected artist, was murdered in Calgary soon afterwards.

These days Thrasher is on a roll with gigs and media attention, largely due to the exposure he received on the recently-released album Native North America Vol. 1: Aboriginal Folk, Rock, and Country 1966-1985. Thrasher has three songs on the 34-track collection compiled by Vancouver deejay and record collector Kevin Howes and released by Light In The Attic Records.

"This album has lit a big spark and it's really given me a big surprise," said Thrasher. "A lot of people are telling us that we deserved this second chance. I've got media in my hometown up north calling me and saying: "'Willie, how does it feel to have an album in Rolling Stone Magazine?' I said that it's gorgeous. It makes me feel good inside."

Thrasher performed this month at the Austin Levitation Psych Fest, made a recent stop in Vancouver and will appear later this year at a festival in the Northwest Territories.

"It's a fantastic byproduct of these reissues," said Native North America curator Howes, of the newfound interest in the album's musicians.

"I had no idea 10 years ago when I was looking for these records that I would be watching many of these musicians on stage because of my efforts."

'I had a little light inside'

Thrasher was born in Aklavik, Northwest Territories. His father was a whaler and hunter. At age five, Thrasher was placed in a Catholic residential school. "A Catholic sister took me and cut my hair so short that my head was bleeding. I was crying. I couldn't speak English at the time and every time that I spoke in my native language I was slapped."

Thrasher said the residential schools tried to "wipe out our Inuit culture -- and they did a damn good job. But I had a little light inside."

He sought comfort in listening to music on the radio. He loved the Beatles, especially drummer Ringo Starr. He decided to take up drumming and, fortunately, the residential school had a drum kit. Soon he was good enough to form a band with a group of friends. The band was called The Cordells and it played mostly covers of contemporary hits and toured local halls, churches and schools in the north.

During one concert an elderly Caucasian man approached Thrasher between sets and asked why the band didn't create original music. "The old man said: 'Why don't you write songs about Inuit culture, songs about your roots,'" said Thrasher, recalling that pivotal moment.

"I didn't even know what my culture was and from then on I started meeting traditional people and learning about our legends, which I had forgotten."

Thrasher's music became more personal and political. Along with other aboriginal musicians like Willie Dunn, he focused on First Nations issues, a tradition adopted by today's top indigenous artists such as Inuit avant-gardist Tanya Tagaq and the electro hip-hop act A Tribe Called Red.

In the early '80s Thrasher made two recordings with the CBC's Northern Service: Spirit Child, a studio album, and Sweet Grass, a live recording with other First Nations musicians.

Thrasher performed across Canada (often travelling in a Greyhound bus) but, as he put it, "we didn't have the big producers or the money behind us, the things that could have pushed us further."

During the '80s and '90s Thrasher battled alcoholism, often living on the streets in Edmonton, Calgary and Vancouver. He would buy guitars and then later pawn them if he didn't make enough money at gigs.

Thrasher credits Linda Saddleback, his partner in life and music, with turning around his life. "One year I went to Vancouver and met a lady and right away something clicked. And I've been sober now for 14 years."

Thrasher and Saddleback live in Nanaimo where he is a licensed busker.

"It's been a slow struggle, but ever since Kevin put out this compilation album we've been getting more calls and we're going to more places."

A few months ago someone gave Thrasher Searching for Sugar Man, an Oscar-winning movie about Detroit musician Sixto Rodriguez whose early music vanished due to poor promotion and his own personal struggles, only to experience a revival in recent years.

"I took it home and watched it and everything was familiar with me. That movie just woke me up. I loved the music, I loved the story. I thought, I'm the Inuit Sugar Man. That's what a lot of people told me."