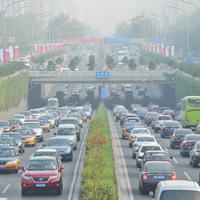 Thanks to the free online documentary Under the Dome released the previous day, the teens' social media feeds became saturated with reactions to the country's environmental health crisis caused by unregulated industry emissions. The film, produced by former state television reporter Chai Jing, would earn over 200 million views before the Chinese government shut it down on March 6.

"I live in Beijing. PM2.5 is literally in every breath of mine," writes Tianyu in an email interview. PM2.5 is shorthand for tiny particulate matter less than 2.5 micrometres in diameter -- the worldwide benchmark for measuring air quality. The World Health Organization pegs unhealthy levels over 25 PM2.5 per cubic metre of air, though China's government only counts readings over 75 as "polluted." High exposure is linked to asthma, heart disease, cancers and many more ailments. "I haven't noticed how detrimental the pollution is to my health condition until I watched this," Tianyu adds.

With TED Talk pacing, Under the Dome articulates the overwhelming scale of the crisis. Over a dozen major urban centres -- not just the nation's capital -- exceed China's smog limits between 100 and 200 days a year. Chai's own sampling finds over 300 PM2.5 per cubic metre in her home of Beijing; further lab tests uncover some of the world's worst carcinogens in quantities 14 times legal limits. She estimates half a million people die every year as a result.

'If I can help, please let me know'

After absorbing Chai's findings that Sunday morning, Linghein reached out to Tianyu and another friend, hatching a plan to redistribute the two-hour film with English subtitles. Putting their heads together, the teens translated the first 20 minutes themselves and uploaded the video to YouTube the next day. "After that, I received a lot of comments and emails," recalls Linghein, who lives two hours northwest of Shanghai in Zhenjiang. "A lot of people [wanted] to help us to translate it."

Eager English speakers picked up on the film's revolutionary quality. "I am learning Chinese, but speak French and English fluently. I also work in medical stats related to health. I taught in Guangzhou three years and felt firsthand the impact of pollutants on my lungs and health," wrote one commenter March 2. "If I can help, please let me know." "This video is China's An Inconvenient Truth, which needs to be seen and heard by the world," wrote another.

Managing close to 100 volunteers from around the globe, the self-described "geeks" divided the film into small assignable chunks. Meanwhile, government censors put out the first calls for media to discontinue coverage of the documentary on March 3.

By March 4, Linghein and Tianyu had crowdsourced 100 per cent of the subtitles -- all vetted by native English-speaking proofreaders. They uploaded the new version on March 5. The film was banned and deleted from all Chinese file-sharing platforms the next day, but the teens' YouTube upload remains untouched. (YouTube is blocked in China, though many use private networks and proxies to get around the ban.)

"There are some people who criticize us that we are showing the drawback side of China to foreign people," Tianyu says of the backlash. "To my friends, I claim, 'They can block the video, as they are too stupid to block the smog!'"

The ban wasn't a surprise, but it was a contradiction. The communist party newspaper the People's Daily was one of the first sites to post an interview profiling Chai and her documentary. The same day, China's new minister of environmental protection, Chen Jining, compared Under the Dome to Rachel Carson's Silent Spring during a press event, according to the Beijing Times.

Chai's access to top government officials suggests some co-operation with Chinese censors. Yet the film remains highly critical of the country's leadership. Chai exposes cozy relationships between industry and regulators, unpunished emissions violations, and an unwillingness among government to disrupt the country's coal-producing industry. (China burns more coal than the rest of the world combined.)

Chai meticulously outlines smog's many sources: vehicles, ports, steel and cement factories -- all markers of progress and prosperity, she says. Seven of the world's busiest 10 ports are in China. And of the world's top steel producers, she jokes, "China is first place, Hebei is second, Tangshan is third and the U.S. is fourth."

The film won't please every environmentalist. Though there's mention of China's recent climate agreement with the United States, it's unhelpfully conflated with the air quality struggle. Writes Kate Galbraith in Foreign Policy: "Cleaning up dirty air doesn't necessarily do that much for the climate.... Slapping sulphur dioxide scrubbers onto coal plants, a common means of keeping one major lung-damaging pollutant out of the air, is not an effective way to cut carbon emissions, for example."

For solutions to China's air pollution, Chai travels to Los Angeles, California and London, England -- cities that overcame brutal air pollution in the 1970s and '50s, respectively. Fines for drivers, better filters for home furnaces, and an eventual shift to natural gas as an electricity source make up Chai's final call to action. These are not forward-looking efforts, but a much-needed game of catch-up.

Ultimately the film's potency doesn't come from its solutions -- it comes from the personal story Chai is able to breathe into numbers and science. She recalls becoming pregnant and then learning her daughter would be born with a benign tumour, requiring immediate surgery. She humanizes China's slow evolution toward public awareness, highlighting decade-old headlines that blamed "fog" for cancelled flights.

Now two weeks since the film's viral release, experts are still interpreting its lasting impacts. So far modest anti-smog protests popped up in Shanxi, the coal-mining province where Chai grew up, while green technology stocks in China saw an uptick of up to 10 per cent. But the biggest results need to come from within the Chinese government.

As for the film's de-facto English translators, international reception has been staggeringly positive. "I meet a lot of people who want to know and notice China," reflects Linghein. "It's the first time for me to translate a video and it's also the first time to co-operate with a lot of people."

The translation may not be the teens' last project; Tianyu and Linghein already received requests for Japanese, French, Spanish and German versions.